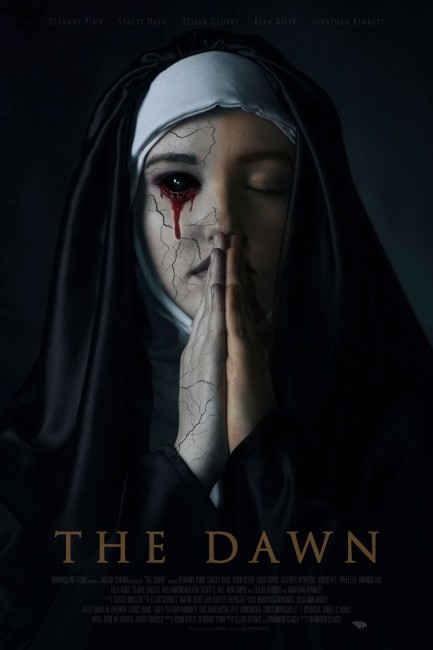 aka The Amityville Dawn

Pennsylvania, 1922. Young Rose is the only survivor after her father goes crazy and kills the rest of the family. The sheriff’s department finds her a home at a Catholic convent. Ten years later, Rose still lives at the convent but hesitates at taking her Final Vows as a nun. She now starts to experience terrifying visions that draw her back to what happened with her family.

I was not much taken with Brandon Slagle’s earlier films but I have to say that The Dawn represents a vast improvement on his part as a director. He has a real photographer’s eye for the grounds of the institution, the lighting of the churches, the Catholic iconography and the like. The film looks great from this perspective. Slagle spends a lot of time building mood and atmosphere. He gets some creepy effects out of black hands crawling up Devanny Pinn’s back and shoulder, or the surreal image of her drowning in a confessional booth.

The Dawn is a film that comes steeped in its Catholicism and gives the impression of being written by somebody in the know. On the other hand, I did have difficulty working out what was going on. Things became particularly confusing when Brandon Slagle pulls a M. Night Shyamalan-esque twist on us near the end of the show where [PLOT SPOILERS] you get the impression that Devanny Pinn has been held by the Catholics for ten years. Moreover, the film seems to suggest that everything that we have seen might have been taking place in a fugue state while she was being held and that she is possessed and may even have been the killer of her family. I honestly couldn’t really work out what was going on here.

The film also goes out on a further twist where the peripheral character of a priest Jeremiah (Ryan Kiser) is seen going on to his next appointment, which happens to be the town of Amityville where we see him looking at a sketch of the Amityville house with its distinctive cupola and the lead in to assume that he is going to be involved in the events of The Amityville Horror (1979). This just seems a gimmicky twist that adds nothing to the film, although the way we see the end title card change from The Dawn to become The Amityville Dawn is clever.