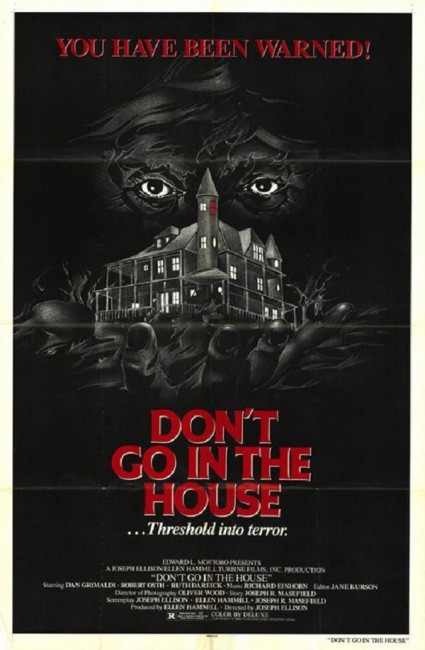 Donny Kohler works at a trash incinerator in New Jersey and lives in a big old house with his mother. Donny has mental issues that go back to when his mother used to burn his arms over a stovetop flame for his sins. He returns home from work one day to find that his mother has died. Voices immediately start talking to him. Realising that this means he can now do what he wants, he creates a metal-reinforced room in the house and then buys a flamethrower and a flame-resistant suit. He then proceeds to bring girls back to the house on a variety of pretexts where he locks them in the room and incinerates them with the flamethrower.

Don’t Go in the House came out amid the slasher fad of the late 1970s/early 80s. It was thrown in with the rest of the genre, even if it is not a slasher film so much as a psycho film – the focus of the film is less on the victims than it is on the central character and his state of mind, something you never much received in the slasher film, which was usually focused around a hulking, masked boogeymen figure stalking teenagers.

There is a strong influence of Psycho (1960) that hangs over Don’t Go in the House – a disturbed young man who lives in a big old house with his mother, whom he is overly attached to, and keeps her body after she has died, maintaining the pretence that she is still alive. He also has a fixation on killing girls – rather than getting them to sign into the motel and killing them in the shower, he lures them to the house, traps them in a locked steel room and incinerates them with a flamethrower. As opposed to the mother’s mummified body in the cellar, he, in an image taken from Deranged (1974), keeps the charred bodies of his victims seated in a room and hears their voices talking to him. There is also the strong undertow of Catholicism that ran through many films of the era – Child’s Play (1972), Communion/Alice, Sweet, Alice (1978) – while the flashbacks to the mother burning the young Donny’s arm on the stove burner for his sins (which are never specified) reminds of the parental abuse in Carrie (1976).

The film was the cause of some controversy, especially in the UK where it was cut of seven minutes of runtime. The scene at the centre of this was the one where Dan Grimaldi lures Johanna Brushay to the house, ties her up naked in the room and then enters in his fire-protective suit and burns her to a crisp with his blowtorch. The scene is shown with no detail spared – although it should be noted that there is no subsequent scene that approaches this in terms of pure nastiness.

There is never much more to the film beyond a string of kills and the focus on Dan Grimaldi’s disturbed state of mind. The victims are colourless (although no more so than in the average slasher film of the era). However, the upshot of this becomes that when we are asked to sympathise with someone charring girls with a flamethrower as opposed to the victims, this pushes the material into a fairly sicko arena.

Director Joseph Ellison only went on to make one other film with the non-genre Joey (1986) about a teenager forming a band. Lead actor Dan Grimaldi has made some other minor acting appearances, most notably was a semi-regular on tv’s The Sopranos (1999-2007). In real-life, he is a mathematics professor.