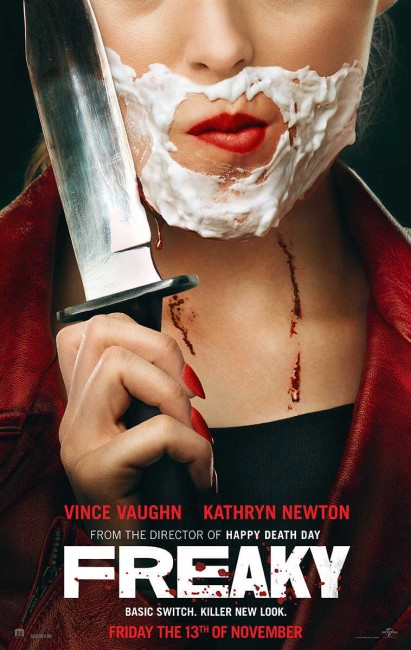 As four students are killed on Wednesday the 11th, rumours spread at the school about The Blissfield Butcher who has been active since the 1990s and is supposed to kill students around prom night. Millie Kessler is waiting be picked up after the sports game when she is attacked by The Butcher. The Butcher stabs Millie with La Dola, a ritual Aztec knife taken from the site of his latest kill. Millie is taken home but the knife has caused her and The Butcher to swap bodies. As Millie, The Butcher goes to school, dressed smoking hot and sets about claiming further victims. Meanwhile, Millie wakes up in The Butcher’s body where she tries to find The Butcher and switch them back before 24 hours are up and The Butcher can claim her body permanently. However, being stuck in The Butcher’s body means she is on every Wanted poster around town and the subject of a manhunt.

I am not much of a fan of Christopher Landon’s directorial outings. It feels as though all that he does is play conceptual mash-up with the plots of other films – the sum of Scouts Guide was its premise of “boy scouts vs zombies”; Disturbia was Rear Window (1954) rewritten as a teen film; Happy Death Day was a slasher film mashed-up with Groundhog Day (1993). Similarly, Freaky is a mashup between a Bodyswap Film and a Slasher Film. The film’s original title was Freaky Friday the 13th and that really is the sum of the film’s concept – a mashup between the Disney film Freaky Friday (1976) and Friday the 13th (1980).

The bodyswapping slasher idea was previously done in the Wes Craven film My Soul to Take (2010), while Craven’s earlier Shocker (1989) has a similar plot. There was also the Friday the 13th sequel Jason Goes to Hell: The Final Friday (1993) that explains Jason’s near invincibility as being caused by a body-hopping parasite. Although the film that has the closest in common with Freaky is the French La Machine (1994) where psychiatrist Gerard Depardieu builds a device that allows him to swap bodies with a serial killer only to end up trapped in the killer’s body and struggling to return to his own.

There have been some witty variants on the slasher film in recent years that have played with meta-fiction or deconstructed the tropes and cliches, ranging from Scream (1996) and sequels to Behind the Mask: The Rise of Leslie Vernon (2006) and The Final Girls (2015). Christopher Landon seems to be setting out to make a similar wryly self-aware film here. The teens in the opening scene sit about telling a Campfire Tale and wondering how the killer can keep reappearing since the 1990s amid lines like “A new legend pops up every year during homecoming week to warn teenagers of the dangers of underage debauchery.” Later characters comment on their likely fate: “You’re Black! I’m gay! We are so dead!” Christopher Landon pays direct homage to the Friday the 13th series in the design of the killer’s mask and with a “ki-ki-ki” chanting on the soundtrack.

Certainly, during the opening scenes Christopher Landon serves up a series of gory despatches – Nicholas Stargel being despatched with a wine bottle shoved down his throat; The Butcher snapping a tennis racket and impaling either end in Mitchell Hoog’s head. There is a very gory scene later in the show where Kathryn Newton shoves bullying woodwork teacher Alan Ruck onto a bandsaw table and bifurcates him lengthways. On the other hand, Landon’s editing is crude – at one point, Emily Holder having her head bashed in with a toilet seat is crudely intercut with two characters having sex.

As said, the complaint I would make about Christopher Landon’s films is that the premise is often the whole of the film. You read the premise before you go in and that is it, no unexpected twists or surprises. That is certainly the case with Freaky – a teenage girl swaps bodies with the serial killer. After you know this before sitting down to watch, all the rest of the film is just comedic complications on this with the addition of some gory deaths. (And most of the lines are given away the trailer). The premise also suffers from some plausibility issues – like how Kathryn Newton can go from a nerdily average nobody to smoking hot and turning everyone’s head the moment a filthy homeless serial killer gets control of her body.

Freaky’s best moment come during some of the characters interactions. Christopher Landon makes this one of the first slasher films to respond to the Hollywood call for diversity in casting and seamlessly integrates the characters. Perhaps the funniest scene is one where gay guy Misha Osherovich has Kathryn Newton tied up in his living room and his mother comes home unexpectedly early and he tries to improvise an explanation that he is involved in role-playing games and is really straight.