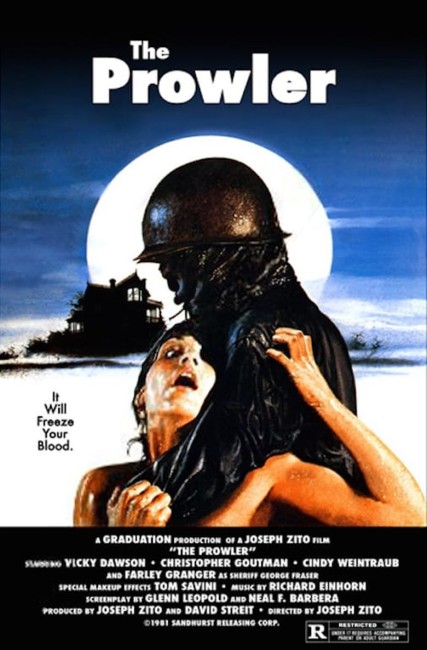 In 1945, a soldier returning from World War II receives a letter from his girlfriend Rosemary, telling him that she is breaking off with him. At the school graduation dance in Avalon Bay, the soldier kills her and her new beau with a pitchfork. In 1980, Avalon Bay holds their first Graduation Dance in 35 years. However, as the dance gets underway, someone begins killing the students using a pitchfork.

The Prowler was one of the numerous slasher films that came out in the early 1980s following the massive successes of Halloween (1978) and Friday the 13th (1980) and numerous sequels to and imitators of these. The Prowler was an average entry in the genre, perhaps made with slightly more in the way of directorial competence than many of the other efforts that emerged. It has surprising similarities to another slasher film that came out the same year – the original My Bloody Valentine (1981), which also concerned a town starting up an annual dance a number of years after people had been killed on the same day and of someone with grim memories of what happened stalking and killing people.

Director Joseph Zito directs the slasher cliches with a certain degree of competence. Zito throws in some nasty gore effects set-pieces at times – a knife stabbed down through David Sederholm’s mouth and out of his jaw; one girl (Lisa Dunsheath) skewered by a pitchfork while in the shower; the climactic scene where a head is blown off with a shotgun. These effects came from cult makeup effects artist Tom Savini who was responsible for the gore effects in Friday the 13th and many of the other films of the same era, in particular his work on Dawn of the Dead (1978). These caused some censorship controversy when The Prowler was originally released, particularly in the UK where the film was retitled Rosemary’s Killer and shorn of a minute-and-a-half’s worth of gore scenes.

As usual with most of these films, the majority of the characters get next to no characterisation and are often blank, which tends to work against drawing the audience into the suspense. One highly amusing performance comes from Bill Nunnery as a very overweight guy answering the phone at a motel in scene that goes on for several minutes where he makes a great pretence of going to call the sheriff without actually leaving his desk. On the minus side, the score tends to go into overtime with all the shuddering strings. The film is also hampered by dark lighting, which often marks it hard to see what is going on (at least in the video version).

There is also a very unsatisfying ending. There is no explanation offered at all of why the individual revealed to be the killer happens to be after all. Nor is this revelation clearly tied to the Dear John letter at the start and the killing of the soldier’s ex. What The Prowler is sorely lacking is any of the cod psychological explanations that most of these slasher films offered up, no matter how removed from real psychology they were. There is also a confusing coda after the psycho has been despatched where, for unclear reason, Vicky Dawson returns to find a body hanging in her shower.

Joseph Zito made a promising directorial debut with The Prowler/Rosemary’s Killer and on the basis of this was invited to direct the fourth Friday the 13th film Friday the 13th: The Final Chapter (1984). Zito subsequently went onto make a handful of action films with Missing in Action (1984), Invasion U.S.A. (1985) and Red Scorpion (1989) but has done little into the 1990s and beyond.

The only recognisable name in the cast, aside from Lawrence Tierney, is that of Farley Granger, known for films like They Live By Night (1948) and Alfred Hitchcock’s Rope (1948) and Strangers on a Train (1951), in the role of the sheriff.