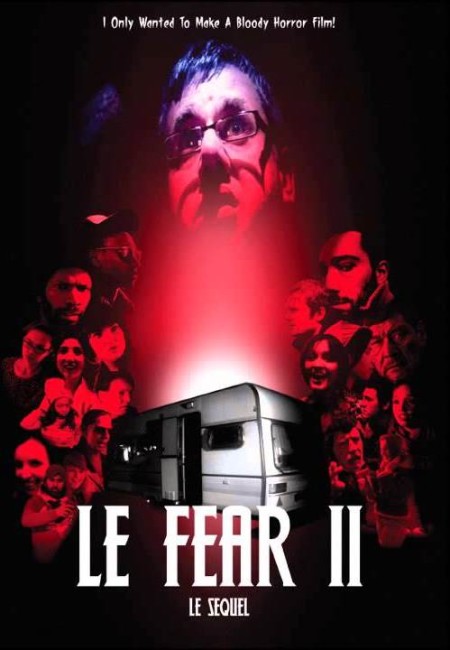 Film director Carlos Revalos pitches his script for ‘Le Fear’, which he intends to be a class horror film, to backer Dirk Heinz. Heinz agrees to put up ten million dollars budget if Carlos will take a second mortgage on his house and raise 500,000 pounds and on the agreement that it is a co-production with Nigeria’s Nollywood film industry. However, when Carlos arrives to begin shooting and meets his Nollywood producer Efi, he finds that the elaborate set he expected is no more than a caravan on a side street. Resigning to make do with what he has, Carlos is further driven to tear his hair out at Efi’s corner-cutting approach and his assistants’ frequent inability to get instructions right.

Le Fear II: Le Sequel is a film from British director Jason Croot. Croot originally made the film on a miniscule budget as Le Fear (2010) also starring Kyri Saphiris as hapless director Carlos Revalos on whose shoot everything goes wrong. From his debut feature there, Croot went onto a number of other works, either solo or co-directing, including Get Ca4h (2011) about filmmakers trying to fund a film by turning to robbery, Song of Solomon (2011), Demons and Doors (2012), Meeting Place (2012) and Roberto (2013) in which Croot himself plays the world’s worst agent. Croot and Kyri Saphiris have returned to Le Fear in several short films, while Le Sequel is the first of a string of several films they have announced about Carlos Revalos.

Le Fear II: Le Sequel is not a horror film as such – rather it is about the failed attempts to make a horror film. Taking a handheld, quasi-mockumentary approach, Jason Croot has pumped this up with a series of characters and on-set disasters that make the real-life filmmaking style of Edward D. Wood Jr look like works of art by comparison. Kyri Saphiris does a wonderful job of looking hapless and downtrodden as one disaster after another occurs around him.

It is a film where the comedy is almost predictable, where each scene simply seems a matter of waiting for it to go hilariously pear-shaped in some way – such as the discovery that the lavish set expected is merely a caravan and later has not even been properly hired; with witch doctors intruding into shots to do product placements for Nigerian telecoms; the vampire girl who turns out to be a stripper; and a series of hilarious misinterpretations of everything that is requested of producer Seye Adelakan who is wont to answer questions like “Have you higher education?” with “I’m 6’2″.” It is a rather accomplished and undeniably funny film.

The film creates some memorable characters – there being an especially standout performance from Seye Adekalan as the wily conman producer bald-facedly insisting that he has everything under control with lines like “This is William Shakespeare’s caravan” or confusing Peter Jackson with Michael Jackson. Or else Victoria Hopkins as the makeup artist determined to sleep with everyone, male or female, in the crew; Julian Lamoral-Roberts who does a wonderful job of imitating Christopher Lee’s baritone as an old school horror actor; and Roxy Sternberg who is hilarious as the tempestuous effects artist who flies off the handle at the slightest hint of criticism of the inflatable grey aliens and a paddling pool she delivers to stand in as the monster and UFO.

This is a film to which you can make comparisons to Borat: Cultural Learnings of America for Make Benefit Glorious Nation of Kazakhstan (2006) – and to which you can get the similar impression that the people of Nigeria are not exactly going to be too happy at being made into comic caricatures in the same way that the Kazak people were by the makers of Borat.