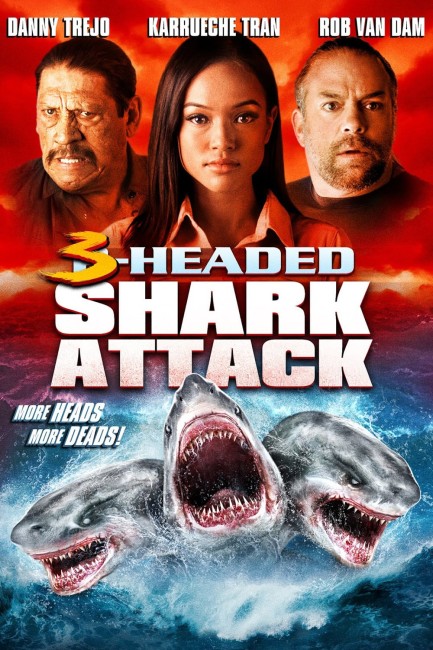 Maggie Peterson arrives to work aboard the ocean research laboratory Persephone, studying the mutated marine life that has developed around a floating trash island known as The Garbage Patch. There she meets her old boyfriend Greg who has arrived as part of a group of environmentalist volunteers. The facility is abruptly attacked by a giant three-headed shark. The crew are forced to evacuate as the laboratory goes up in flames. Maggie and several others flee aboard the environmentalists’ damaged boat and try to get to safety, all the while pursued by the three-headed shark.

The Asylum’s shark movies have long since passed the point where they have attempted to be credible – and with all the more entertaining results. As Sharknado 3: Oh Hell No! (2015) proved around the same time as this, The Asylum are gaining an acutely aware sense of the type of movie they are making and hitting the mark with delirious results. The effects here are also a quantum leap of improvement over the flat and obviously CGI generated ones that turn up in most of their other films.

3 Headed Shark Attack hits its stride from the appealing absurdity of the scene a few minutes in where the shark makes its first appearance, leaping up onto a beach where each of the three heads snatches and devours a victim. The scene is hilarious in its in-your-face unexpectedness and sets the tone for the rest of the film. The rest of the show is intended to move at a fast lick and serve up a variety of tensions as the cast members attempt to avoid the shark and others get eaten. Christopher Douglas-Olen Ray offers up a variety of appealingly ridiculous such scenes – a man getting devoured as he sits down on the toilet and the shark bursts up out of the bowl; the shark leaping out of the water and up some thirty feet into the air to then do a dive direct down to devour a swimmer beneath it; or Scott Reynolds impaling an axe in the shark’s back and holding on to surf along on top of it.

The dramatics are rather ridiculously set up to keep providing a series of boats and mini-islands for the cast to have to keep jumping from and on to as they are pursued. These gain an increasingly improbability as the show goes on. There is one sequence that seems to have to involve every single member of the group individually swimming out to a boat moored a hundred feet offshore where you sit there wondering why a single person couldn’t have swum out and brought the boat in closer. The other funny piece is the drama that takes place aboard the paddle steamer that keeps cutting between the model shots of the smoking boat listing at a 45-degree angle with its stern partially submerged and shots of the survivors back on deck, which remains on an even keel right through the rescue efforts.

The Asylum’s films usually bring in actors with a minor name presence. The film’s casting coup is the presence of Danny Trejo, even though he essentially has a supporting role. He gets an immensely entertaining scene where he wades into action, hacking off one of the shark’s heads with a machete. They also throw wrestler Rob Van Dam in during the latter third where he tries but only proves that he is no real actor.