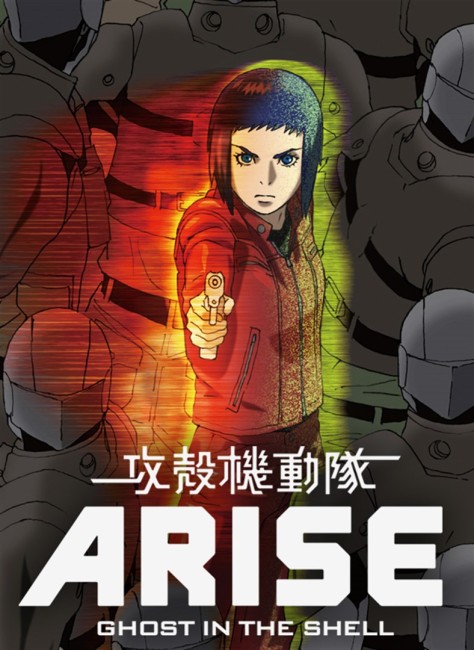 Border: 1 Ghost Pain:- Newport City, 2027. The security agency Section 9 digs up the grave of Lieutenant-Colonel Matmuro, a murdered operative from the military intelligence Section 501, seeking his cyberbrain as evidence in a corruption investigation. They are interrupted by Major Motoko Kusanagi, a Section 501 agent who has been a fully-replaced cyborg since birth. Opened, the coffin is found not to contain a body but the booby-trap of a ‘mobile land mine’– an android left to kill them. In being given freedom by her superiors to investigate, Motoko finds evidence of high-level corruption over illegal arms trading and the more disturbing realisation that both Matmuro and her own cyberbrains have been hacked. Border: 2 Ghost Whisper:- Colonel Kaguya Soga has been placed on trial for massacring civilians as a military commander but insists he is being framed. From his cell, he manages to access a military satellite network and hijacks all the traffic and transit networks in Tokyo, causing chaos. Section 9 assigns Motoko the job of stopping Soga and gives her the freedom to bring together her own team of specialists. Border: 3 Ghost Tears:- Motoko’s team is called into action as a bomb is detonated at a dam. Behind this is discovered to be the super-terrorist known as Scylla who constantly changes bodies. Meanwhile, Motoko has developed a relationship with prosthetics specialist Akira Hose who encourages her to look beyond being a cyborg and see herself as human. Border: 4 Ghost Stands Alone:- Unknown forces hack into Motoko’s cyberbrain and control her to assassinate a high-ranking minister at a conference. With the realisation that their unit has been compromised by the heretofore unknown possibility of hackers implanting false memories, Section 9 try to track down those behind the attack. In questioning Emma Tsuba, a girl found near the scene, they puzzle over an individual who appears to have had two separate ghosts implanted in her body.

Ghost in the Shell was originally a manga from Masamune Shirow, who was also the creator of Appleseed. The original manga series Ghost in the Shell (1989-90) appeared over eight months in Young magazine. This follows the cyborg officer Motoko Kusanagi and her companion Batou as they deal with a series of threats in a cyberpunk future. Shirow later revisited the world with a sequel Ghost in the Shell: Man-Machine Interface (1991-7) and Ghost in the Shell 1.5: Human-Error Processor (1991-6), a collected set of stories bridging the two series.

Ghost in the Shell: Arise is a reboot of the series from the Japanese animation studio Production I.G., who have been behind all the other Ghost in the Shell films, as well as other works like Jin-Roh: The Wolf-Bridge (1998), Blood: The Last Vampire (2000), Oblivion Island: Haruka and the Magic Mirror (2009) and numerous other films and tv series. The reboot series is divided into four chapters called ‘borders’, which are self-contained stories but each with a continuing overall arc that tells the story of the formation of Section 9 and the bringing together of the familiar characters from the rest of the series. Each of the films runs to slightly less than an hour and were released theatrically in Japan six months apart just before going to dvd. Some of the English-language screenings have brought the episodes together in two screenings of two parts each.

The last entry we saw in the Ghost in the Shell series was Mamoru Oshii’s stunning Ghost in the Shell: Innocence, which pushed the series’ level to a dazzlingly artistic one. Up against this, Ghost in the Shell: Arise feels like a retrograde step. The animation is a step back in quality to the perfectly acceptable but lesser quality of the original 1995 film. The one disappointment of the film is that for all the mechanical and prop designers listed on the credits, very little is invested in making the future look futuristic – the vehicles are all taken from contemporary designs as though nothing had advanced in fourteen years

During the first episode, the action scenes are nothing spectacular, although this markedly picks up in Border: 2 Ghost Whisper in a kinetic sequence with vehicles on a freeway being rammed by a van trying to destroy the Logicoma robot and Motoko jumping through the van’s sidedoor on her motorcycle while shooting; or the subsequent shootouts with the military robots in a carpark. The fourth episode climaxes in a battle with massively armoured robot that starts to head into the territory that anime is known for..

There is still the extraordinarily sophisticated level of Cyberpunk ideas that all the Ghost in the Shell incarnations have played with – the manga circles around the questions of what is machine and what is human in a cyborgised world. In the first episode, Border: 1 Ghost Pain, we meet Motoko Kusanagi and learn that she is considered government property because of the cost of her parts and has to sign paperwork every time she even goes to use an ATM (presumably because of concerns about hacking).

There is the hauntedness of character that we saw in the originals – we learn that she has been one hundred percent cyborg replaced ever since she was a foetus, followed by the supremely Philip K. Dick-ian moment where we find that someone has been hacking in and altering her memory and that what she thinks she believes about the world may not be true. Motoko gets a unique arc throughout the four episodes where she travels from being government property to winning her independence.

Border: 3 Ghost Tears contains the best writing of her character where we are introduced to her lover Akira Hose who has maintained a relationship with her longer than any others because he is excited about tinkering with her. Later they have discussions about her nature where she talks of her decision to act in a human-like way and how this isolated her from other cyborgs in the academy because she preferred human touches like sleeping in a bed and taking showers and how he tries to persuade her that she has a body rather than inhabits a thing. Later he takes her on a tour of the new cyborg wave – of wealthy people who have their minds transferred into machine bodies, including a wedding made up of cyborgs, even a pregnant bride and food that has been designed to be tasted by machines.

All of the episodes have complex plots, which often require a second viewing to keep track of them. The first episode seems overly complicated in its murder plot – there seem too many agencies running around after the cyberbrain and you are not sure why all of these are happening. Nevertheless, the ideas at play through the series are exceptional – conceptually, Ghost in the Shell: Arise gets to the heart of William Gibson-ian Cyberpunk possibly better than any other science-fiction film, including coming up with a visual representation for the heroine’s ventures into cyberspace and her creation of what she calls ‘a foyer’ where all of her team meet virtually to discuss the mission.

I rather liked some of the nifty ideas we see throughout – like where the team is defeated by the terrorists hacking into their programming and feeding false memories or action scenes with Motoko jumping aboard attackers, plugging in a neural jack and sending an override command to shut them down. By the fourth episode, Motoko and the group that she assembles are dealing with a nightmare world of intelligent viruses, the ever-present threat of hacks into their brains and the implantation of false memories.