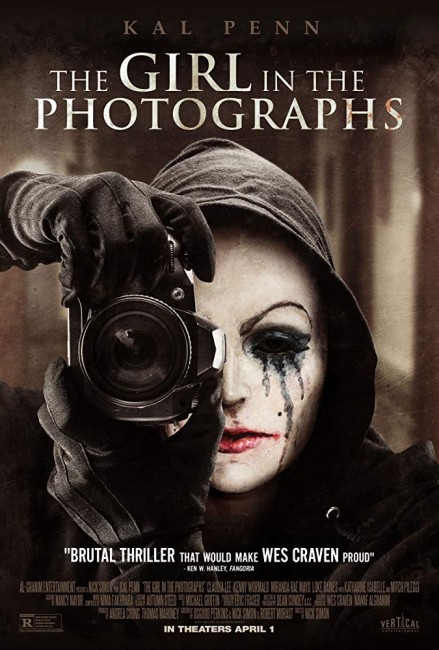 In the small town of Spearfish, South Dakota, convenience store checkout girl Colleen is being stalked by someone who taunts her, leaving photos showing the murdered bodies of local girls that have been going missing. The sheriff’s department fail to take her complaints seriously. The story intrigues high-profile fashion photographer Peter Hemmings who decides to travel to Spearfish and shoot in the same style as the photographs. There Peter’s entourage, Colleen and the killer intersect without realising it. When Peter meets Colleen, he decides he wants her to be his muse and take her back with him back to L.A.. At the same time, the killer starts stalking Peter’s group.

The Girl in the Photographs received good word of mouth. It brought together some interesting names including small appearances from Mitch Pileggi and Katharine Isabelle, as well as John Carpenter’s cinematographer Dean Cundey on camera. Not to mention that it is executive produced by Wes Craven, the last film Craven is credited for following his death in 2015. It was the second film for director Nick Simon who previously made the horror comedy Removal (2010), as well as wrote the scripts for Cold Comes the Night (2013) and The Pyramid (2014), and subsequently went on to direct 2 Lava 2 Lantula (2016), Truth or Dare (2017) and Karma (2018). The other interesting name on the credits is Osgood Perkins, the son of actor Anthony Perkins, who later became a director, most notably with the horror films The Blackcoat’s Daughter/February (2015), I Am the Pretty Thing That Lives in the House (2016) and Gretel & Hansel (2020).

The film has the interesting idea of the stalker targeting one girl (Claudia Lee), taunting her by leaving photographs from his other victims. (This is something that the local police seem way too indifferent about investigating for credibility’s sake given the number of girls that are going missing in the area). What gives the film a level of interest is its double plot. Kal Penn is introduced as a photographer who decides to travel to the town and create a series of fashion shoots in the same manner that the killer is arranging the dead girls. By a great deal of coincidence, Penn encounters the killer’s target Claudia Lee and decides to use her as his muse. The film’s most inspired scenes are where Penn decides he wants to take Claudia back to L.A. with him and the film starts to swing a clever series of analogies between his being inspired and the killer’s fixation on her with the egocentric Penn seeing the killer as a rival and deciding to steal her away from him.

Alas, The Girl in the Photographs is not nearly as interesting as it seems it is going to be. For one, Kal Penn’s character is dropped from the show after about the two-thirds point and all the interesting metaphors and playoffs disappear and what we are left with is nothing more than a standard slasher film.

The other problem is that Nick Simon is often amateurish in his set-ups. One of the worst of these is where a masked figure enters the store and waits outside the restroom while Claudia Lee is refreshing herself inside – only for her to emerge and it be revealed that the killer has been waiting outside a completely different restroom and has abducted someone else. The creation of red herring suspense here through misdirecting editing feels like a massive cheat.

One of the bonuses of the film is the presence of Kal Penn best known for the Harold and Kumar films and tv shows like House M.D. (2004-12). Penn gives an outrageously obnoxious performance that ends up enlivening an otherwise routine show. He has been outfitted with a series of wryly funny douchebag lines – you get the impression that he is frequently ad libbing much of his performance. There is a particularly funny scene where he finds Luke Baines trying to chat up Claudia Lee in the store and stands on the sideline meta-gaming all of Baines’s lines for him. The film loses much from removing him too early in the show.