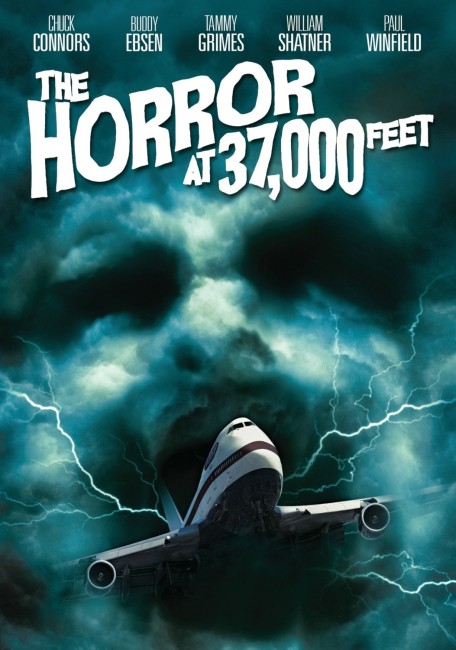 Architect Alan O’Neill charters a plane from Heathrow Airport in order to carry the pieces of an abbey that is being relocated to the US from his wife’s country estate in the UK. A handful of passengers are also taken on board. Soon after takeoff, strange things begin to happen. The plane becomes stalled in mid-air and is unable to move onwards. Ice and ooze begins to emit from the crates containing the pieces of the abbey and the hold grows over with moss as passengers and one of the co-pilots are killed. They realise that the abbey was built on an ancient druidic sacrificial site. Now, on this, the day of the summer solstice, the sacrificial stones are coming back to life.

The Horror at 37,000 Feet was a rather absurd TV Movie that came out in the mid-1970s. It gives the impression that it was conceived as an attempt to blend two popular cinematic fads of the era – the occult movie that came about after the successes of Rosemary’s Baby (1968) and The Exorcist (1973), and the disaster movie that peaked with the success of The Poseidon Adventure (1972).

In particular, the film feels like an attempt to mix the Exorcist/Rosemary’s Baby deviltry film with Airport (1970), the film that started the Disaster Movie fad off. The Horror at 37,000 Feet comes with a line-up of standard disaster-movie characters – the alcoholic former priest, the beautiful model, the bad-tempered millionaire, the cute little girl and even a dog along for the journey.

The Horror at 37,000 Feet is a silly film, although to its credit it and most of the principals do maintain a degree of intent gravity and at least treat the exercise seriously. Director David Lowell Rich made various other tv movies in the occult genre – the famously cheesy Satan’s School for Girls (1976) – as well as disaster movies – in fact, he made one other airborne disaster movie with Airport ’79 – The Concorde (1979). Rich creates some passable atmosphere – there is a certain creepiness to the scene where the characters dress a voodoo doll in the clothes and with hair clippings from one of the victims as a sacrificial substitute to the druidic stones.

Mostly though, David Lowell Rich is defeated by the very tv movie nature of the exercise – the film comes with artificially dramatically hyped sequences structured around the commercial breaks, which cannot help but seem false. The main other problem might be that the film is primed with much in the way of cliché spooky goings-on – coldness emanating from the hold, mysterious deaths, creeping goo and mist, ominous music, a possessed woman muttering in Latin – but never builds to the unveiling of anything.

The Horror at 37,000 Feet is somewhat fascinating for its cast who have been largely culled from tv successes of the previous decade, including William Shatner from Star Trek (1966-9) as a former priest who has lost his faith and has now hit the bottle; lantern-jawed Chuck Connors as a resolute pilot; Buddy Ebsen from The Beverly Hillbillies (1962-71) as a hotel chain owner bragging about how much money he has; Roy Thinnes from The Invaders (1967-8) as the architect (as well as Thinnes’s wife Lynn Loring as William Shatner’s girlfriend); and Russell Johnson, The Professor from Gilligan’s Island (1964-7), as a flight engineer who gets frozen.

The Horror at 37,000 Feet has gained a certain bad movie fascination for William Shatner’s performance, where he goes through his cod-Shakespearean thing as the priest, spending the whole film drinking and tossing off cynical asides. The film also features some poor special effects when it comes to the shots of the plane suspended in mid-air and particularly during William Shatner’s climactic self-sacrifice.

David Lowell Rich had a long career as a director between the 1950s and 1980s, principally in tv. His only other genre films were the Three Stooges space launch comedy Have Rocket — Will Travel (1959) and the psycho-thriller Eye of the Cat (1969). Rich’s only other major theatrical release was Airport ’79 – The Concorde (1979).