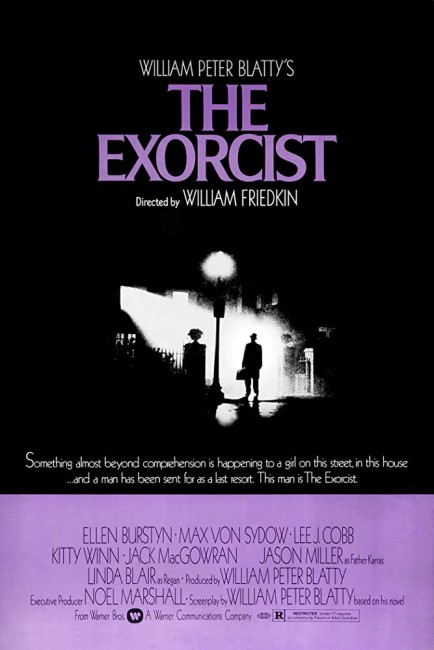 The success, or rather the phenomenon, that was The Exorcist was wilder than anybody could ever have dreamed – the en masse audience walk-outs, the vomitings in the aisle, claims and counter-claims as to doctrinal authenticity, its supposedly being based on documented fact and even the claims that the film itself was literally demonically possessed. All of which contributed to make The Exorcist the then second highest-grossing film of its time.

Director William Friedkin, who was then riding high on the success of the cop thriller French Connection (1971), delivers some undeniably effective shocks – foul-language, urination, vomitings and a grim scene where a twelve year-old girl is seen masturbating with a crucifix while screaming about Jesus fucking her – that were certainly some of the most hardcore obscenities ever subjected to an audience at the time. If nothing else, The Exorcist well and truly put the old adage about the best horror being that that is left unseen into the grave for once and for all. For many years, The Exorcist became the yardstick against which horror films were measured. It must also be the first case of a film changing the nature of modern religion. Soon after the film came out, charismatic churches began to report an alarming rise in cases of possession. Religious populists of the Twentieth Century such as Billy Graham had never touched on this relatively obscure area of Biblical doctrine but after the success of The Exorcist, churches became obsessed with cases of demonic possession, even resulting in professional exorcists who travelled the world delivering audiences of demons.

The Exorcist is undeniably highly effective but in the cold light of day seems ultimately only a better made exploitation film. William Peter Blatty had had considerable success with his 1971 novel, which the film is adapted from. Blatty was a former Jesuit seminarian and his knowledge of the background clearly gives the film an authentic ring. There are three priests credited as advisors on the end credits and when we see people reading the rituals of exorcism there is no doubt that this is the real thing. What is surprising when you contrast The Exorcist with the spate of imitators that followed it is how it never falls into genre patterns – it is a character-driven film. It is as much a film about Catholicism and the crisis of faith in the modern world as it is a story about possession and exorcism.

Yet for all its would-be sincerity, The Exorcist is a theological debate that is presented with the visceral appeal of a screaming tabloid headline. It seems at once a film that is both earnest and calculating. The core of its dramatics are not particularly subtle – in all cases it uses the child to make its points. It brutalises her to show that evil exists; it brutalises her to show that science is unfeeling. It uses a child because a child represents innocence – the shock that comes in the film derives from seeing a child conduct such obscenities. The film wheels her out every time it wants to make a point – Friedkin throws in unpleasant images of Linda Blair undergoing a spinal tap and having large needles inserted or of her terrified surrounded by the deafening machinery of a CAT scan. These scenes serve no point in themselves until one realises that the film has a loaded thesis. It wants to demonstrate that science is blind and it uses the child to make its point. It is really shock pornography. You could argue that The Exorcist constitutes one of the most extreme cases of child abuse in the history of cinema.

The film also leads to some interesting implications – it seems to imply that innocence is a natural state of childhood and that for children to be obscene, use sexual references, masturbate, even to pee on the carpet is something evil ie. it is behaviourally alien to them therefore it must come from The Devil. It is a type of thinking that sits atop the mood of conservative parental thinking of the 1970s – that of parents suddenly unable to understand how come their children were no longer innocent and cherubic and were instead dropping out of society, taking drugs, having ex before marriage and rioting against established authority. The 1960s youth revolt was something so far removed from some traditional parents’ views that children should be good and innocent that the temptation to see The Devil as cause must have been strong. (The Exorcist makes remarkable contrast to Ken Russell’s The Devils (1971), a film about Catholicism and demonic possession, which instead takes the view that possession is not actual but a product of religious frenzy).

Better is Linda Blair whose transformation from sweet innocent to demonic incarnate is startling. (Although you are never sure whether to applaud her performance or the team of makeup artists and actresses substituting for the demon’s voice and the grosser obscenities). There are also a number of fine performances in the supporting cast that received no nomination – Lee J. Cobb as the sly, boyish detective and especially Max Von Sydow’s wonderfully dignified turn as Father Merrin.

William Peter Blatty won the Award for his adaptation of his own 1971 novel. He does a fair job of pruning his at times ponderous work, including cutting many of the unnecessary subplots about the butler’s heroin addicted daughter and much of the careful documentation of the black magic rituals. (Although, this does leave the sudden appearance of a desecrated Virgin Mary in the church early in the piece as something that is never linked to anything anywhere else).

In the year 2000, William Peter Blatty and William Friedkin combined to cinematically rerelease a reedited version of The Exorcist. This version restored eleven of the fifteen minutes that were trimmed to bring the original release in at two hours running time. These restored scenes include the cod-Casablanca (1942) scene where Kinderman and Father Dyer walk away from the McNeil residence (which helps set up the second sequel); several scenes that give more time over to the initial attempts to medically diagnose Regan; and the famous spider walk sequence where Regan walks down the stairs on her hands and legs bent over backwards. The re-release also adds the dubious effect of several subliminal shots of demonic faces being seen or reflected against walls – the film never needs such an effect, the directorial shocks should be enough to carry it on its own. Better is the new THX sound system remix – here the creepiness moves all around the theatre and one is made to jump at the unexpectedly loud slams and bangs.

The Exorcist was followed by three sequels:– Exorcist II: The Heretic (1977) from John Boorman, which is commonly regarded as the worst sequel of all-time, although is not entirely uninteresting; The Exorcist III (1990), directed by William Peter Blatty, which abandons the gross-out theatrics and is in many ways a better, more subtler film than The Exorcist; and the prequel Exorcist: The Beginning (2004), which exists as two different movies, one directed by Renny Harlin that was given a theatrical release and widely pilloried and Dominion: Prequel to The Exorcist (2005), a more cerebral version directed by Paul Schrader that was dumped because the studio decided it was not scary enough. The Exorcist (2016-8) is a tv series loosely based on the original, featuring Geena Davis as a now adult Regan whose own daughter becomes possessed. The otherwise dreadful Possessed (2000) is a film based on the supposed true-life exorcism that inspired William Peter Blatty. Leap of Faith: William Friedkin on The Exorcist (2019) is a documentary where William Friedkin discusses the making of the film. Also of considerable interest is the documentary The Devil and Father Amorth (2017) where William Friedkin films a real-life exorcist in action and then sets out to examine this in terms of both religious and psychological phenomena.

Repossessed (1990) was a parody that featured Linda Blair spoofing her role. It was also parodied in Scary Movie 2 (2001), A Haunted House (2013) and Exorcism at 60,000 Feet (2020). Kevin Williamson’s Teaching Mrs. Tingle (1999) also contains an amusing scene parodying The Exorcist, while the film was also sharply deconstructed in an episode of Williamson’s tv series Glory Days (2001-2).

Since The Exorcist, William Friedkin’s career seems to have been suffering a Devil’s Curse of its own, vying between critical and financial failure, with none of his films having been outright successes. Friedkin has made some fine, underrated films – Sorcerer (1977), To Live and Die in L.A. (1986) and Killer Joe (2011) – and several outright flops – Deal of the Century (1983) and Jade (1995). A number of William Friedkin’s films have touched on genre themes – Cruising (1980), a psycho-thriller set in the gay subculture; Deal of the Century (1983), a futuristic black comedy about arms smuggling; Rampage (1987), a courtroom serial killer thriller that debated the Insanity Plea; The Guardian (1990) about a baby-snatching Druidic babysitter; The Hunted (2003) about a man hunting humans for sport; and the claustrophobic Bug (2006). The most interesting of William Friedkin’s projects was an adaptation of the hoax The Diary of Jack the Ripper that was announced in 1993 but has so far failed to emerge.

William Peter Blatty wrote several other novels, including Legion (1980) that became the basis for The Exorcist III, which he wrote and directed. He also wrote/directed The Ninth Configuration/Twinkle Twinkle Killer Kane (1980), also from one of his novels, a very strange film set in a psychiatric institution. The Exorcist made Linda Blair’s name although her subsequent career has been in B and exploitation movies such as Roller Boogie (1978), Hell Night (1981), Savage Streets (1981), Chained Heat (1983), Red Heat (1985) and Bedroom Eyes II (1990).