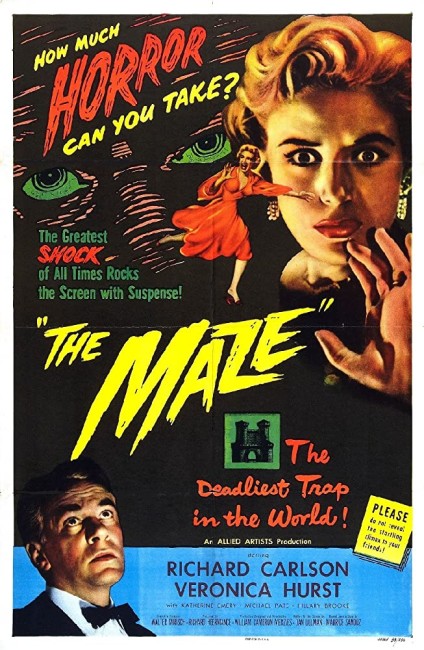 Kitty Murray is holidaying in Cannes with her Aunt Edith and her fiancee Gerald MacTeam, whom she is about to marry in two weeks. Gerald suddenly receives a cable from his ancestral home of Castle Craven in Scotland, telling him that his uncle has died and that he must go there immediately. In the days after Gerald leaves, Kitty begins to worry as no word comes from him. She then receives a telegram calling off their engagement but giving no reason. She and Edith decide to travel to Castle Craven. Gerald gives them a curt welcome, reluctantly giving them rooms and telling they must go by morning. Kitty contrives means to stay longer. However, they find they are also being locked into their rooms at night while outside something slithers through the hallways.

William Cameron Menzies (1896-1957) is a director who attained a modest name in genre circles. Menzies was a former production designer who turned director. making such classic films as Things to Come (1936) and Invaders from Mars (1953), among others. (See below for William Cameron Menzies’ other genre credits). One of the more interesting points of note about Menzies was that he worked as both director and production designer on his films, creating a unique synthesis where the sets came to reflect and echo inner states of mind.

The Maze was made the same year as Menzies’ classic alien invader film Invaders from Mars. Invaders was shot in the new 3D fad that had begun the previous year with Bwana Devil (1952) but ended up being released flat; The Maze was however released in 3D. Menzies is one director who eschewed the gimmicky trap that most other 3D films fall into of constantly popping things out of the screen. Instead, he utilizes his sets for creating a sense of atmosphere and perspective – about the only gimmicky 3D designed scene we get is where a dancer is swung out of the screen during the engagement party, plus an obvious bat on a wire flapping into camera during the exploration of the castle.

The Maze was one of the few horror films made during the early and mid-1950s, or at least horror films that were not science-fiction hybrids. The Maze is essentially a haunted house story, even if the end explanation is one of deformity rather than supernatural agency. Menzies wields all the cliches and tropes of the genre – perpetual fog, haughty and ice cold retainers, a forecourt filled with gnarled and twisted trees, the visitors being locked in their rooms.

Menzies designs the sets to heighten the mood – the castle is all austere stone pillars, which are placed solidly in frame like giant blocks. Moreover, the people in the shots always inhabit the bottom half of the frame while the pillars and walls of the castle seem to loom over the top half. Most ominous is the effect of something slithering through the hallway in the middle of the night, seen as nothing more than a shadow under the crack of the door – something that effectively harkens back to the day of Val Lewton and the idea of suggested supernatural menace.

The story is fairly standard for the genre, albeit with one or two improbabilities – the film never explains, for instance, how the American Richard Carlson is heir to a Scottish barony. And then there is the revelation of what it is hiding in the castle at the centre of the maze. This is almost always the point where viewers’ suspension of disbelief in the film abruptly falls down – [PLOT SPOILERS] where we learn that the original laird of the castle has remained alive since the 17th Century and looks like a frog. It is a revelation that nearly wrecks the otherwise credible build-up the film has conducted.

The film manages to work despite this. The costuming created for the human-sized frog is particularly effective, showing it bounding up the stairs and down the hallways, although once Menzies gets into closeup this is revealed as just a man inside a costume crawling on all fours.

As director, William Cameron Menzies made a number of classic genre films including:- the mystical superhero film Chandu the Magician (1932), adapted from the popular radio serial; Things to Come (1936), the H.G. Wells written Utopian work of future history; the Communist infiltration thriller The Whip Hand (1951); and the classic alien invasion and takeover film Invaders from Mars (1953).