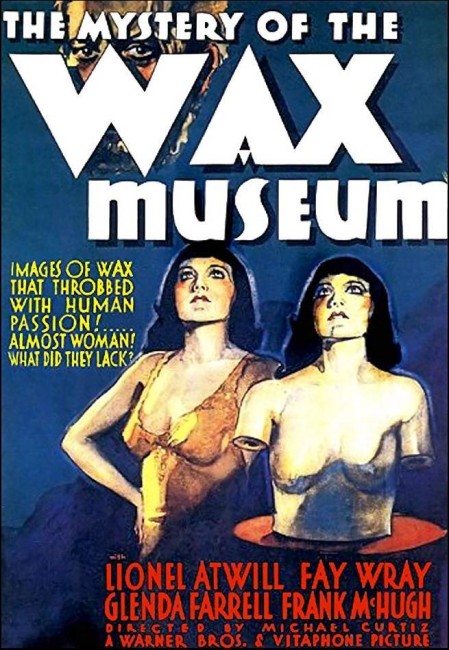 London, 1912. The waxwork sculptor Igor has lovingly created an exhibition of beautifully realistic waxwork mannequins. However, these are not making money and Igor is shattered when his unscrupulous business partner burns the wax museum down for the insurance money. New York, 1933 and Igor opens a new wax museum. Searching for a story, reporter Florence Dempsey investigates and makes the discovery that the deranged Igor is stealing bodies from the morgue and using them as the basis of his new waxwork creations.

Mystery of the Wax Museum is one of the genuine genre classics to emerge out of the 1930s Golden Age of Horror. It was directed by Michael Curtiz, who later made celebrated classics such as Captain Blood (1935), The Adventures of Robin Hood (1938) and Casablanca (1942). Furthermore, it served to make the name of Lionel Atwill, who had earlier appeared as a good mad scientist in Michael Curtiz’s Doctor X (1932) and would go onto other great parts as mad scientists in The Vampire Bat (1933) and Man Made Monster (1941), a memorably hissable villain in Murders in the Zoo (1933) and as the one-armed inspector in Son of Frankenstein (1939), before becoming a supporting player in various Universal monster team-ups and mad scientist films of the 1940s. As though to confirm its classic status, the film also featured Fay Wray, who two months later the same year appeared in the all-time classic King Kong (1933).

Mystery of the Wax Museum is a classic but one that also has to be understood within a certain context. Prints of the film were unavailable for many years and it did not emerge back into circulation until the late 1960s. There its reappearance disappointed many fans in respect to the reputation that had built up around it. The much more widely seen remake House of Wax (1953) has tended to form perceptions of the film and when seen against this Mystery of the Wax Museum tends to disappoint slightly. Most notedly, the horror element is something that only emerges at the end.

To those who do not understand this, the major two-thirds of the film that centre around girl reporter Glenda Farrell (who is the real star of the show rather than Fay Wray) prove dull. As much as it belongs in The Golden Age of Horror, the film just as equally falls into the era’s genre of newspaper romantic comedies that emerged after The Front Page (1931). In themselves, these newspaper scenes are not unenjoyable with Glenda Farrell giving a wonderfully boisterous performance and the dialogue in these scenes being snappily tuned.

When the film finally emerges as horror at the end, it does with suitably entertaining regard, building to a classic Grand Guignol climax. There is the memorable much-talked-about scene where Lionel Atwill has Fay Wray cowering before him and finally rises from his wheelchair to come for her and she batters at his face, only to break his mask and reveal his hideously disfigured real face beneath. It is a classic scene, on the order of the unmasking of Lon Chaney’s Phantom in The Phantom of the Opera (1925).

Like many of other horror films of the era, Mystery of the Wax Museum employs the stylised Expressionism of the silent German classics, in particular The Cabinet of Dr Caligari (1919). Lionel Atwill’s lair is built as a mad scientist’s lab with distorted staircases, giant struts running across the lab at 45 degree angles, angular doorways and the multi-tiered central lab itself with giant bubbling vats. The film was also shot in an early Technicolor process and modern prints restore the original colour process.

The wax museum theme has proven a popular one in horror throughout the years. House of Wax (1953) was a lavish full colour, 3-D remake starring Vincent Price in the Lionel Atwill role although, despite some memorable moments, is the lesser of the two. The story was also later remade as House of Wax (2005), a slasher film that has little to do with either previous version. The theme of mad sculptor/artist covering corpses in wax/plaster or killing models also appears in films such as A Bucket of Blood (1959), Mill of the Stone Women (1960), Santo in the Wax Museum (1963), Color Me Blood Red (1965), Blood Bath (1966), Nightmare in Wax (1969), Sadisterotica/Red Lips (1969), Cauldron of Blood (1971) and Crucible of Terror (1971).

Michael Curtiz made several other ventures into horror with a lost version of Alraune (1918) in his native Hungary and the Hollywood films The Mad Genius (1931), Doctor X (1932) and The Walking Dead (1936).