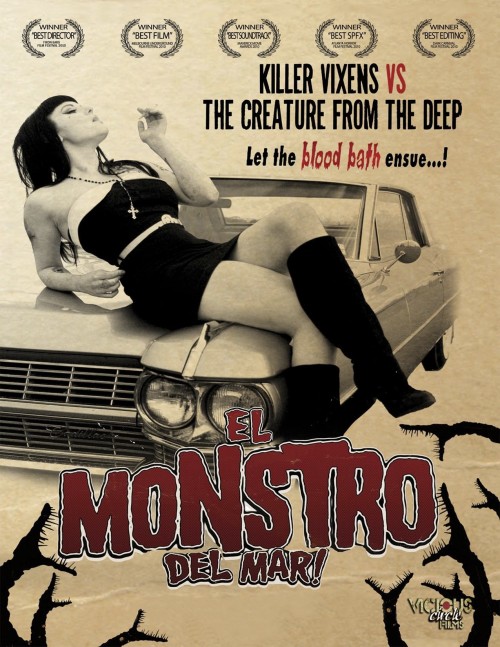 Three girls, Beretta, Blondie and Snowball, go on a cross-country spree of mayhem and murder. They break into the seaside cabin of a friend of Snowball’s to party. The neighbour, the aging Joseph, warns them not to go in the water but they ignore him. They draw Joseph’s innocent granddaughter Hannah into their partying and get her drunk for the first time. What they do not realise is that a monster lives in the depths and previously slaughtered all of the townspeople, including Hannah’s parents. As Joseph fears, the monster has been awakened again.

This Australian film is rather of a surprise find. One has no idea what to make of it before sitting down to watch. The dvd cover with Nelli Scarlet draped across a car suggests Russ Meyer in Faster Pussycat, Kill! Kill! (1965) mode – one has always maintained that Meyer should have made a venture into genre territory at some point – or perhaps even more so the wilful trashiness of the films of John Michael McCarthy – see in particular The Sore Losers (1997). The title El Monstro del Mar!, which translates as The Sea Monster, is baffling – why an Australian film made in English language release has a Spanish title is something that entirely eludes one.

Stuart Simpson readily homages late 1950s/1960s trash cinema, a genre that was epitomised by Meyer’s Faster Pussycat. Rather than someone like Quentin Tarantino who uses the not dissimilar Death Proof (2007) to merely make a film nerd in-joke that quotes endless movie trivia, Stuart Simpson is more interested in recapturing the style of the era and is willing to be far trashier than Tarantino ever is. You could sort of see El Monstro del Mar! as Death Proof having been taken over by Russ Meyer in Faster Pussycat mode – and with a monster movie thrown into the mix as well. (Stuart Simpson even appropriates the worn frame flickers look that Tarantino and Robert Rodriguez used in Grindhouse (2007), although this is now starting to seem like a cliche. Simpson also shares Tarantino’s love of music from that era and features several retro garage bands on the soundtrack).

The film has a great opening wherein the three girls play helpless with their car pulled over on the roadside and lure two guys who think they are going to get laid, only for the girls to slit their throats, whereupon the film abruptly explodes from black-and-white into colour. It is an opening that gives El Monstro del Mar! an enormous kick of energy. Thereafter alas, the film slows down and we keep waiting for Stuart Simpson to find such a burst of energy again. He tries – in the scenes where the girls introduce Kyrie Capri to alcohol – but never quite does.

The film’s sympathies and focus is not dissimilar to Troma’s Chopper Chicks in Zombie Town (1991) where a group of troubled girls ride into town, raise hell and are then forced to fight together with the locals against a monstrous force. Here El Monstro del Mar! is somewhat hamstrung by the fact that it is shot on a low-budget and the small town that the girls invade never seems to consists of anything more than a couple of holiday cabins on the shoreside.

The film clearly lacks enough of a budget to feature many appearances from its monster. However, just when you are prepared to settle into disappointment, Stuart Simpson pulls the show together in an amazing climax. This features the surviving girls facing off against the giant tentacled monster in hand-to-hand combat, a sequence that manages to be well shot, intensive and gore-drenched.

The girls have fun in their respective roles, especially Nelli Scarlet who makes the film her own. Kate Watts does maybe seem a little too well spoken for the juvenile delinquent she is meant to be but the girls are clearly having a ball. Equally, Kyrie Capri manages to seem an embodiment of unprepossessing innocence.

Stuart Simpson had previously ventured into the horror genre with the film The Demons Among Us (2006) and went onto make Chocolate Strawberry Vanilla (2014) about a lonely ice cream truck driver’s unbalanced obsession with an actress.