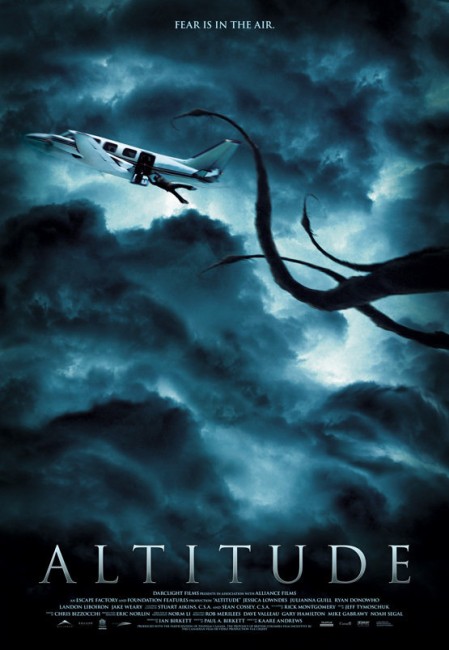 Sara has just gotten her pilot’s licence and has hired a small plane to fly her and three friends to a concert. She has also invited Bruce, the guy she has been seeing. Not long after they take off, a bolt gets loose and jams in the elevator mechanism and Sara finds that the plane is uncontrollably climbing. Soon they enter into a storm and continue to rise as the altimeter registers 20,000 feet. This brings with it problems of lack of oxygen at that height and ice on the wings. As tensions build in the cabin and they try to solve the problem, the others believe that they see something out there in the midst of the storm.

This moderately budgeted Canadian-made feature is the feature-film debut of Kaare Andrews. Andrews has previously worked as a comic-book artist, winning awards for his work on various Marvel Comics titles, including Spider-Man and The Incredible Hulk. As director, Andrews had previously made six short films and several music videos. Screenwriter Paul A. Birkett has made a career out of turning out scripts for B-budget action and genre films for people like Lloyd A. Simandl, Richard Pepin and low-budget action producers Cinetel, which include the likes of Escape Velocity (1998), Mindstorm (2001), Not My Life (2006), Hellhounds (2009), Ice Twisters (2009), Storm War (2011), Alien Tornado (2012), Arachnoquake (2012), Haunted High (2012) and Ghost Shark (2013). He has written two further plane action films with Con Express (2002) and Crash Landing (2005) and has next announced Night Wings about a vampire on a plane.

Paul A. Birkett happily admits to being a fan of tv’s The Twilight Zone (1959-63). Indeed, the entire film could be a feature length of extension of the famous Nightmare at 20,000 Feet episode, later remade by George Miller as the best segment of Twilight Zone – The Movie (1983). The film essentially extends the edgily paranoid doubts that Miller created about whether there is something is outside in the storm out to make a full-length film.

Altitude also turns out to be a confinement drama where the entire film is restricted to the inside of a small single-engine plane trapped in mid-air for the duration. We have seen a number of these thrillers in recent years – films based around the idea of a thriller contained inside a minimalist space. This started with Phone Booth (2002), a psycho-thriller that trapped its protagonist inside a telephone booth for the duration and has continued with the likes of Open Water (2003), which featured no sets, just two characters swimming in the sea surrounded by sharks; Black Water (2007), which took place in a tree as the cast were being menaced by a crocodile below; Wind Chill (2007), a ghost story set inside a car; Buried (2010), which was set entirely around Ryan Reynolds trapped inside a coffin; Frozen (2010) with three characters trapped in mid-air on a ski chairlift; and The Night Chronicles 1: Devil (2010) about five people trapped in an elevator with The Devil.

Altitude could easily have gone the route of Snakes on a Plane (2006) in planting tongue in cheek and taking none of its monster on a plane idea seriously. Despite what must surely have been some pressure to do so, Kaare Andrews and Paul A. Birkett play the entire show in complete straight face. Everything has been streamlined towards the purpose of maintaining a gruelling level of suspense – the script is designed with the intention of compounding the situation in some way every few minutes. Kaare Andrews does a remarkably good job in racking up the tension. The scene where Ryan Donowho decides to free-jump out onto the tail and is left hanging out behind the plane on the end of a rope as the others try to reel him in is one of the most tension-gouging scenes that one has sat through in a theatre in some time.

Paul A. Birkett has certainly done his research on matters of aviation. This is a film that never insults its audience’s intelligence or opts for easy cliche dramatics. For the better part, Andrews and Birkett keep the menace to subliminal glimpses that are so brief you are not sure that you might have imagined them. This does lead to a rather funny scene a la The Birds (1963) where everybody speculates with increasing absurdity as to the nature of what is happening to them – military experiments, hypoxia or aliens.

In any other film, the characters would be stock cut-out types of zero depth – the Final Girl, the jock, the party girl, the socially awkward nerd who knows more than he says – yet all of these are solidly drawn and the cast give fine performances. The only complaint you might make is Landon Liboiron who overdoes the nervous twitchy nerd role to the point that you wonder how someone self-assured like Jessica Lowndes could possibly be attracted to him. You can predict that we are going to hear good things from a number of those in the cast – standouts being Jessica Lowndes and particularly Jake Weary – again very soon.

If Altitude had stayed with the level of relentless suspense it generates, it would probably have earned a four star rating. The point where it falls down is the twist ending revelation of what is going on. Here Kaare Andrews and Paul A. Birtkett have sought to conduct an M. Night Shyamalan-styled last minute left field ending, of which we have seen some exceedingly hokey examples in recent years. [PLOT SPOILERS] Here the monster and the entire situation is eventually revealed to be something that Landon Liboiron conjures out of his imagination whenever he gets afraid (no explanation is ever given of how he manages to do this) and that somehow he has been causing events that takes place in his comic-book to come true. (It also turns Altitude into a major homage to Twilight Zone – The Movie with the premise seeming to be one that mashes together the Nightmare on 20,000 Feet segment with the It’s a Good Life segment where Jeremy Licht terrorises everybody with the things he conjures out of his imagination).

When this comes you are left trying to hold a straight face, not knowing whether to break into laughter – it is a point where the Snakes on a Plane approach would have had a field day. However, Paul Birkett pulls it all together in a beautiful coda that brings the beginning and end of the film together in a nicely subtle and very upbeat time travel twist.

Kaare Andrews next went onto direct the V is for Vagitus segment of The ABCs of Death (2012) and Cabin Fever: Patient Zero (2014).