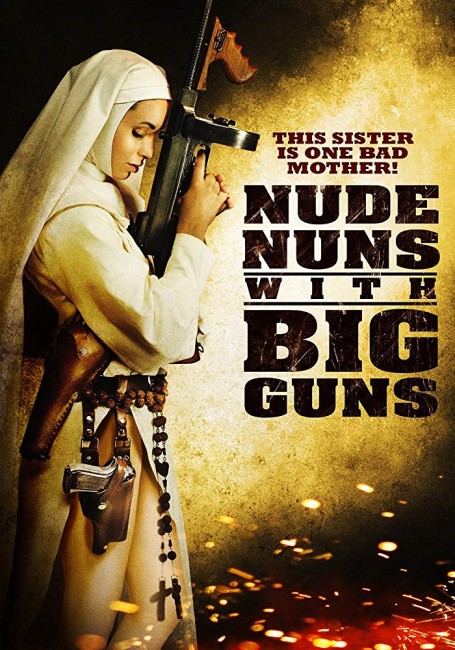 The nuns at the Villamos Monastery are being used to process drugs for the Los Muertos gang. During a delivery, the gang leader Chavo discovers that someone has stolen one of the packages and starts shooting the nuns on the bus until he finds the guilty party. The sole surviving nun Sister Sarah is taken to be used as a prostitute in the gang’s brothel and hooked on drugs. One year later, the need to shoot Sister Sarah up again to handle a new client causes her to collapse. Taken away by the brothel’s pharmacist, Sister Sarah returns to life, insisting that she has been given a vision from God to kill the guilty and show no mercy. Arming herself with an arsenal of big guns, she then starts eliminating her way through Chavo’s gang and the priests and nuns who are part of the drug-dealing operation.

The so-called nunsploitation genre emerged in the 1970s and consisted on a series of films that focused on the most lurid aspects of the lives of nuns. These would feature a good many nun-on-nun love scenes, raping priests and flagellation scenes, as well as the frequent struggle against the cruel authoritarianism of the convent life. The genre sat on a line between works that were sex films and those that rested in the horror territory featuring possessed nuns and/or historical purges. The genre was spawned by the success of Ken Russell’s The Devils (1971) with its blasphemous images of nun orgies and hallucinations of nuns having sex with Jesus. The actual output of nunsploitation films was small, passing through the likes of The Demons (1972), Flavia the Heretic (1974), The Sexorcist (1975), Sister Emmanuelle (1977), Alucarda (1978), Behind Convent Walls (1978) and The Killer Nun (1979), not to mention the iconic image of a gun-toting Zoe Tamerlis in nun’s habit at the climax of Abel Ferrara’s rape-revenge drama Ms. 45/Angel of Vengeance (1980).

Nude Nuns with Big Guns is a homage to the nunsploitation genre. It falls into the fad for faux grindhouse films that emerged following Quentin Tarantino and Robert Rodriguez’s Grindhouse (2007) – see Death Proof (2007) and Planet Terror (2007). I have written elsewhere about how there was no such genre as grindhouse back in the 1970s, just a loose series of exploitation films with no thematic or creative connection other than that they played in exploitation theatres. Indeed, the term grindhouse was never one that was ever popularly used back in the era. This has not stopped several filmmakers popping up trying to imitate the grindhouse style – see the likes of El Monstro del Mar! (2010), Hobo with a Shotgun (2011), Dust Up (2012), Holy Hell (2015), She Kills (2016) and Nude Nuns with Big Guns here. Although notedly what is being imitated is not the original exploitation films but the style that Tarantino and Rodriguez popularised – all of these copy the same faded film footage, flickering frames and sarcastically comic-book tone that celebrates the pulp elements, none of which could ever be said to be part of the original films.

Nude Nuns with Big Guns is made by Joseph Guzman who had previously made the brutality and assault drama Run! Bitch! Run! (2009). I am unable to find much biographical information on Joseph Guzman, although one assumes from that surname that he is of Latino background. This feeds back into the film where a substantial proportion of the cast are Latino and the setting seems intended to be somewhere like Mexico (although was in actuality shot around California’s Inland Empire region). Guzman seems to be a big fan of Robert Rodriguez’s films and is very much influenced by the Tex Mex pulp style that Rodriguez created on El Mariachi (1993) and Desperado (1995) and, in particular, the comic-book style of Machete (2010), which notedly also featured Lindsay Lohan as a nude gun-toting nun.

The overriding theme from Joseph Guzman’s other films seems a determination to trash the Catholic Church’s image. (Run! Bitch! Run! was essentially a replaying of The Last House on the Left (1972) but with Catholic schoolgirls as the victims). Here Guzman gets right into the nunsploitation elements and serves up plentiful nun lesbian love scenes and rape scenes. The priesthood is openly engaged in dealing drugs – at the convent, the nuns are seen preparing the drugs, wearing coifs and wimples around the head but otherwise nude. Elsewhere, we see nuns being used as strippers and sold into prostitution for those who have nun fetishes; priests with guns concealed in their Bibles; a priest sarcastically referring to confession as getting inspiration for jerk-off material; priests being blown away in the confessional and the like.

Joseph Guzman’s shortcoming is that he is trying to replicate what Tarantino and Rodriguez did with a low budget. Nevertheless, what he does do is craft the film with a ferocious pulp energy that gives it an undeniable life of its own. Certainly, when it comes to the title promise – plentiful nudity, a gleeful plunge into nunsploitation and lots of big guns shooting things up, he delivers in aces on all three counts. Hitting the note perfectly is the climactic scenes where Asun Ortega wanders through the brothel shooting up gang members, hookers and their clients in the middle of scenes, before going into rescue her nun love (Avcil Yeltan) as the gang leader (David Castro) rapes her, taking her to her side before shooting his dick off with her gun.