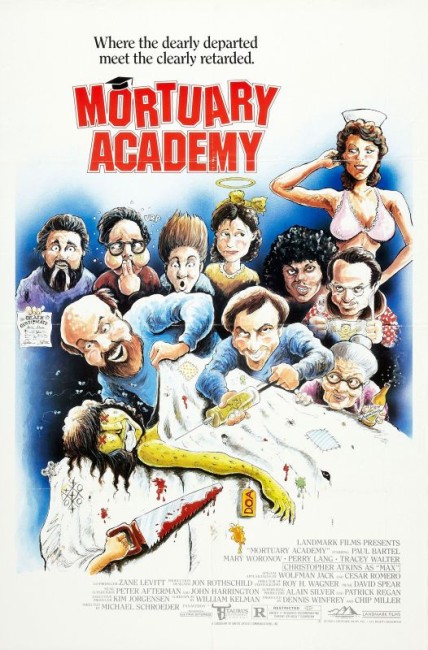 After the death of their uncle, brothers Sam and Max Grimm are made the sole beneficiaries of the Grimm Academy – a mortuary and its attendant training school. However, the inheritance is contingent upon their graduating from the school. As they enrol in classes, they come up against Paul Truscott, the academy’s slimy director, who is determined to fail them at all costs and retain control of the academy. Truscott also has a taste for necrophilia. When the corpse of a beautiful virginal cheerleader is brought in, having choked on some popcorn, Truscott falls head over heels for her.

As such, it serves up an outrageous stew of necrophilia scenes, bloodthirsty psychopaths, hip racist humour and bad jokes about menstruation. In various scenes, groups from rival mortuaries fight for body parts at the scene of an accident; a body ends up being dumped from a coffin during a funeral, revealing the coffin to be filled with chicken bones. The dialogue comes brazen and sarcastically – characters sling insults like ‘toxic vagina’ at one another; Perry Lang counsels brother Christopher Atkins after he has been rejected by his girlfriend: “there’s still time for the kneepads and mouthwash.” It is not unlike a Troma film – albeit a Troma film that has been made on a modest B-budget and with a halfway competent cast.

Most of the time Mortuary Academy feels like a film trying to be funny. Half the cast seem unable to keep smiles off their faces – they fail to play it straight meaning that there is no deadpan to any of it. Paul Bartel and Mary Woronov repeat their pairing from most of Bartel’s films as a director and effectively dominate the show – in fact, Bartel, who also writes the script, seems to have designed the roles for the two of them, they even sharing the same first names as their characters. Mary Woronov is good, still saucy even if her fifty years are beginning to show, but Bartel hams badly, showing at the very least that he would have had no trouble fitting the shoes of Vincent Price.

The script was co-written by star Paul Bartel, himself a director of films that frequently wander into bad taste, including the kinkiness comedy Private Parts (1972); the futuristic black comedy Death Race 2000 (1975); Eating Raoul (1982), a cult comedy about murder and manners; and the quasi-supernatural satire on the Beverly Hills nouveau riche Scenes from the Class Struggle in Beverly Hills (1989).