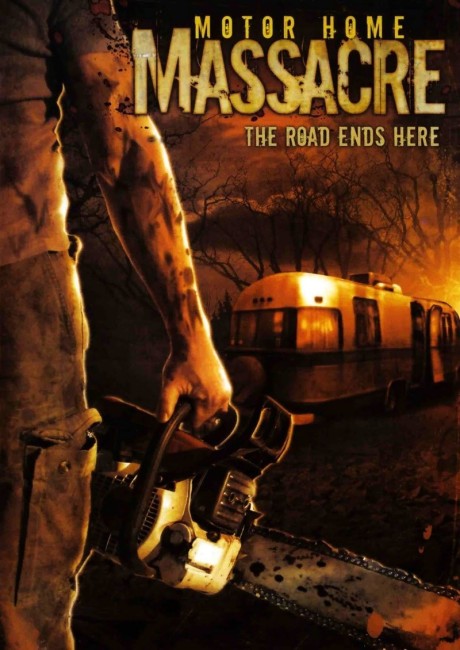 Benji’s friends persuade him to borrow his parents’ RV while they are away and head up to Black Creek Park to go camping, along with several girls. They arrive at the park only to find that it has been closed off because several campers have been slaughtered. Now that they have arrived, the ranger will not permit them to leave. As they settle in for the night, the group meet Nicole, a survivor of the slaughtered expedition. However, she is receiving threatening cellphone calls from her ex, saying he is going to kill everyone she befriends. Soon a masked figure appears and begins slaughtering members of the group.

Motor Home Massacre is a low-budget slasher film that I picked up in the bargain bins. Nobody involved seems to have gone on to ever do anything again. Director/writer Allen Wilbanks did subsequently make the fascinating sound Evil Keg (2007) concerning a beer that turns people into flesh-eating zombies.

Motor Home Massacre is a routine Slasher Film. It has been cheaply shot on video. One’s hopes sink only a couple of minutes in where the credits play out as the group set forth in the RV accompanied by a country-and-western song with chorus lines like “I’m a truckin’ lovin’ man.” (The entire soundtrack seems to be made up of similar songs).

The line-up of characters is dominated by bad acting. Nelson Bonilla plays the musclebound jerk constantly getting in our face with his loudmouth obnoxiousness in a way that comes in shrieking caps letters. Equally so, Justin Geer overplays the wimpy nerd role. The girls in the background are all played as airheads where at least some of their bitchy dialogue has its amusements, although you are not entirely sure if this was intentional or not. The worst performance however comes from Todd Herring whose attempts to play a white rapper and affect hip-hop slang and attitude are entirely laughable.

Once the film gets the party to the camping site, things become tediously predictable. The identity of the slasher stands out with absurd overemphasis [PLOT SPOILERS] – it tends to be given away by her unexplained reappearance as the survivor of the party we see slaughtered in the prologue. Equally the reality of the sinister caller on the end of her cellphone tends to be given away by scenes where the others stand around wondering why they cannot get signals while she is on the phone to her threatening ex.

Director Allen Wilbanks does little to enervate any of the slasher scenes. What one ends up being drawn by is the comic nature of some of the scenes – whether such was intentional or not is another story. Like the scenes with Shan Holleman bashing Tanya Fraser with a frying pan while parroting relationship-speak cliches: “There’s no guarantee in love that anybody’ll love you back … You hold on for the person of your dreams.” Not to mention the equally funny scene where Tanya Fraser gives Shan Holleman the cellphone to talk to her imaginary ex and, after Shan protests that there is nobody there, Tanya fakes a conversation with the ex and then sets up a date to go out next Wednesday.

The film reaches an exceedingly lame ending [PLOT SPOILERS] where Tanya Fraser is killed, the cellphone then rings and it is her disturbed boyfriend, followed by the survivors fleeing in the RV only for the black masked killer to step out in front of them and take off his mask revealing that it is Tom, the ex that Shan Holleman was trying to get over, whereupon she suddenly goes gooey-eyed and the film fades to black.