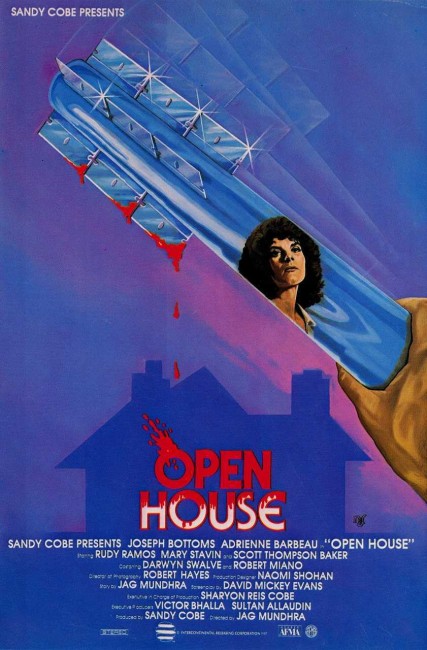 Somebody is slaughtering female realtors. David Kelley, a psychologist who runs ‘Survival Line’, a radio psychotherapy talkshow on Station KDRX and who is himself romantically involved with realtor Lisa Grant, then starts to receive on-air calls from the killer.

The slasher cycle began with Halloween (1978) and then Friday the 13th (1980). The genre peaked in 1981 amid a whole host of cheap and nasty clones and had almost entirely burned itself out by 1983. Despite this, many other filmmakers belatedly milked the vein for several years afterwards. Open House is a slasher film that starts out aiming slightly higher than most – a bald synopsis of it makes it intriguingly sound like a slasher version of Oliver Stone’s Talk Radio (1989), which in itself was almost a psycho film without a psycho.

However, Open House is a very poor film on all counts. In fact, the idea of a radio talkshow host dealing with a phone-in psycho is almost entirely incidental to the slasher business, which director Jag Mundhra is clearly more interested in. The film wastes the potential inherent in the idea – it could have been used to draw out suspense or allow the film to get inside the mind of the psycho – but these opportunities fall by the wayside.

Mostly, Open House concerns itself with killing women, usually ones in a state of undress. The scenes with psycho Darwyn Swalve dragging women about and chaining them up before killing them are unpleasant. Moreover, the scenes are dully directed, flatly photographed and fail to generate any suspense. The script also has a huge gap in plausibility – despite the fact that women realtors are being killed all over the place, it is not until well into the film that the real estate industry appears to do anything about taking their female agents off the job (which may well be intended as an oblique comment on the mercenary nature of the realty industry but mostly just comes out as credibility defying plotting).

Where Open House does momentarily become interesting is in its meeting with the psycho at the end. He is amusingly disappointed because Joseph Bottoms has turned up without the media. The insight given into him – that he is a homeless person and kills out of bitterness over being driven out from a place he was squatting – is intriguing. The film generates surprising sympathy for him.

The radio talkback host vs psycho theme was first done in the slasher film Don’t Answer the Phone! (1980), later in the equally disappointing Dead Air (1994) and acted as a subplot in the more interesting Outside Ozona (1998).