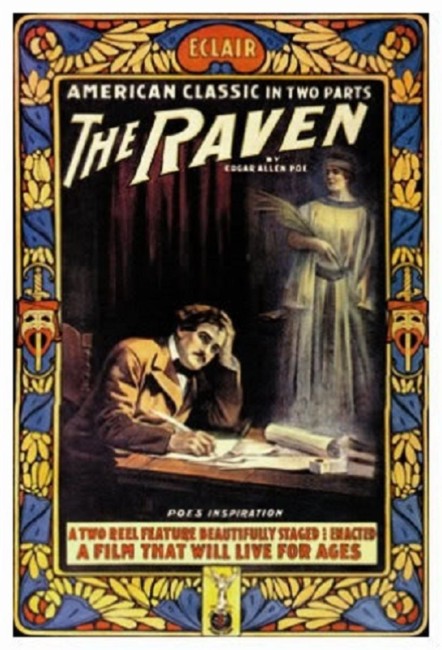 Edgar Poe is adopted by his stepfather and takes his name Allan. At college, he spends much time drinking and incurs gambling debts, forcing him to be sent back home. He marries Virginia Clemm but struggles to make a living as a writer. She then dies. Slumping into alcoholism, Poe has visions of a raven appearing to him and sees the ghost of Virginia beckoning from the afterlife.

This was one of several films based on Edgar Allan Poe’s poem The Raven (1845). The poem features an unnamed narrator who mourns his lost love Lenore and is interrupted by a raven that only speaks the word “nevermore.” There have been several film versions that take the title of the poem, although none of these bear the slightest resemblance to what the poem describes, featuring plots as diverse as The Raven (1935) with Bela Lugosi as a Poe-obsessed madman; Roger Corman’s The Raven (1963), a comedy about warring magicians; The Raven (2007) with a raven-masked killer attacking people at a ball in the present; and The Raven (2012) with Poe himself trying to stop a serial killer influenced by his work. In fact, this version can be considered the only one of the films bearing the title that has anything in it that resembles the substance of the poem.

Some of these aspects such as the reports of Poe being a drunkard and opium addict have been revealed as exaggerations that emerged after his death. While Poe did have a fondness for drink, he did so no more than most regular drinkers who occasionally overindulge but hardly to the extent of famous alcoholic writers like Dylan Thomas and Charles Bukowski. The question is to what extent this was publicly known back in 1915; otherwise, it just feels that George Cochran Hazelton is repeating commonly known (or assumed) facts about Poe.

Fully half of The Raven can be thrown into the straight biopic category. I was watching a not very good quality copy pulled off YouTube so it is sometimes hard to tell what is going on. About the halfway point we do get what seem to be a series of dreams(?)/drunken hallucinations(?) as Poe (Henry B. Walthall) is visited by the raven. Sections of the poem are quoted in intertitle cards with the word ‘Nevermore’ appearing in caps.

In between this, Poe has several hallucinations including that of a figure struggling Sisyphus-like up a slope as the word ‘Wine’ appears on a boulder. We get other visions of Poe’s soul departing from his body, he travelling up to the Pearly Gates and being visited by a woman (where it is not clear whether this is Virginia’s ghost or someone else). There is the brief recap of a fairytale (although oddly nowhere do we get any mention of Poe as horror writer). It all emerges as a rather slight and not terribly interesting film.

Charles J. Brabin was a regular director of the silent era and on into the talkies. His greatest fame was probably as the husband of silent movie star Theda Bara. His one other genre film was the amazing The Mask of Fu Manchu (1932) with Boris Karloff as the Chinese super-villain.