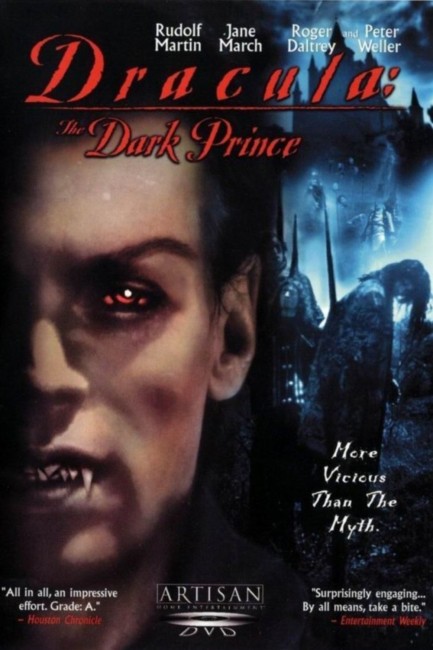 aka Dark Prince: The True Story of Dracula

In 1476, Vlad Dracula, the infamous ruler of Romania, is brought before an inquisition of the Eastern Orthodox church and demanded to account for his actions. He tells his life story, how as a teenage boy he and his brother Radu were held prisoner by the Turks. Released, Vlad claimed the throne and instituted a brutal regime, slaughtering the nobles that betrayed his father and impaling their bodies on stakes, and executing ruthless justice. All the while, his kingdom was caught between the onslaughts of the hated Turks and his tenuous alliance with the king of Hungary.

Considering the popularity of the character of Count Dracula on screen, it is a surprise that up until this point that nobody had attempted to make a film out of the eminently fascinating life of the tyrant Vlad Tepes, who of course lent his name ‘Dracula’ to the horror genre. A couple of Dracula films – the Dan Curtis Dracula (1974) with Jack Palance and Francis Ford Coppola’s Bram Stoker’s Dracula (1992) – had directly associated Dracula with Vlad Tepes. The only previous film had attempted to make a film out of Vlad’s story itself was Vlad the Impaler (1979) made during the reign of Romanian dictator Nicolae Ceausescu, which was historically accurate but sought to whitewash Vlad’s atrocities.

It was however produced by Kushner-Locke who specialise in B-budget direct-to-video movies, while the cast includes several notorious bad actors like Roger Daltrey and Jane March. At least on the positive side, the film was shot in Vlad’s real home turf of present-day Romania where Kushner-Locke shoot many of their horror films, using the crew formed by Charles and Albert Band.

Vlad the Impaler it is not that bad a film. It is made with a modest budget, certainly more than Kushner-Locke’s usual B budgets. Joe Chappelle creates some modestly well-scaled battle scenes (although for some reasons many of the swordfights are shot in a jerky, partially sped-up motion). The film is frequently bloody, with Chappelle not shying back from showing the bloodshed, the numerous decapitations and, of course, impalings attributed to the historical Vlad. (The one vision we never do see – presumably due to budget – is the forest of impaled bodies in the thousands that Vlad reputedly left to face an invading army at one point).

Especially good is the relatively unknown Rudolf Martin – a month before this film came out, he was also the vampiric Dracula in the Buffy vs Dracula (2000) episode of Buffy the Vampire Slayer. He plays Vlad with a dark and brooding sexiness and projects a surprising charisma and conviction in the part. Jane March is a terrible actress who nevertheless managed to project a pixieish sparkle in her leading parts in the likes of The Lover (1992) and Color of Night (1994), which largely consisted of her taking her clothes off and displaying her spectacular body. Here she keeps her clothes on and rather than projecting any sparkle seems surprisingly gaunt.

Alas, Rudolf Martin’s handsome, sexy Vlad tends to mitigate against a convincing depiction of the historical Dracula. The film gives us a surprisingly sympathetic portrait of Vlad. In fact, we never get a picture of the genuine sadism that the historical Vlad delighted in. Instead the film excuses Vlad’s actions as just – Vlad is seen as justifiably defending his land against Turkish invaders and the film maintains that his cruelties were due less to unbalanced sadism than to a stern but fair notion of justice that he operated on. There is no sense here of him as wielding unimaginably autocratic tyranny against all his people, irrespective of person or any reason for doing so. What the film ends up resembling is less any character that the history books portray, than the propagandist rewriting that Vlad the Impaler underwent in the 20th Century where Romanian nationalists tried to convince the people that Vlad was not a tyrant but a hero defending his country and minimising his atrocities.

The film accurately depicts many of the stories attributed to Vlad – his inviting the nobles to dinner and killing them all, his brother being put forward by the Turks as pretender to the throne, his nailing of the Turkish ambassadors’ turbans to their heads because they refused to remove them in his presence, his reputed leaving a gold cup by a well that stayed untouched by the peasantry out of fear that they would be slaughtered if anyone dared take it.

The king of Hungary during Vlad’s reign (1448-1476) was not Janos but Matthias Corvinus. (The scriptwriter is perhaps thinking of Janos Hunyadi who was the governor and became guardian of the infant king Ladislav V who assumed the throne in 1446 until Matthias claimed it in 1458, but was himself never crowned king). Vlad was Vlad III not Vlad II as the film maintains. Although, the greatest historical inaccuracy maintained is that Vlad Tepes was the ruler of Transylvania, as opposed to Wallachia.

Where Vlad the Impaler becomes decidedly dubious and loses credibility, especially in regard to its claim to be telling an historical story, is when it foolhardily tries to tie the historical Vlad the Impaler story to vampire mythology. Thus bats ominously flutter around Vlad’s castle, lightning strikes the tower and the Madonna bleeds tears when he is born. This continues with rumours of Vlad drinking the blood of his enemies; his being fatally wounded in battle and then making an apparent return from the dead; his developing an allergy to sunlight possibly due to hereditary conditions; he not wanting to look into a mirror because he does not want to see his dead wife’s soul; his being excommunicated and thus a damned soul condemned to wander the Earth; and the ending which all but steps over into conducting a vampiric revival from the grave. While the film never directly comes out and talks about vampirism, there is the implication that all of this (none of which is substantiated in history) is what led Bram Stoker to create the essence of what has become regarded as modern vampire mythology.