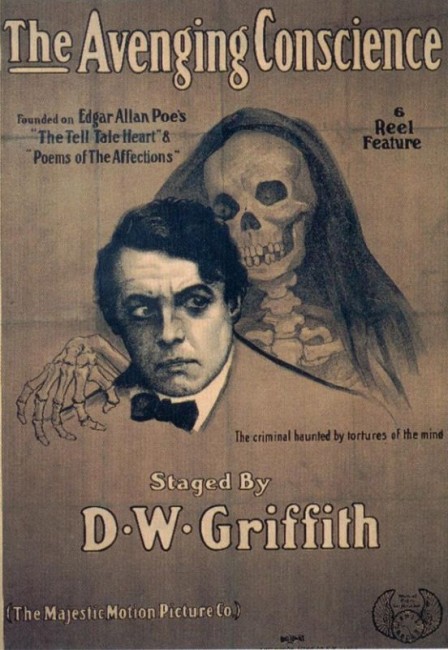 A young man has been raised by his uncle. He loves a local girl whom he has named Annabel Lee but is refused to marry her by his uncle who believes he is owed some years of service for having supported his nephew. Unhappy at this, the nephew’s thoughts turn to murder and he is eventually driven to strangle his uncle. He bricks the body up inside the fireplace. However, the murder has been witnessed by an Italian and the nephew is forced to bribe him for his silence. Thereafter though, the nephew is haunted by the accusing ghost of his uncle. Plagued by his conscience, he sees visions of damnation.

The Avenging Conscience or “Thou Shalt Not Kill” was one of the early works of founding filmmaker D.W. Griffith (1875-1945). Griffith was known for classic epics of the silent era such as The Birth of a Nation (1915), Intolerance (1916), Broken Blossoms or the Man and the Yellow Girl (1919) and Orphans of the Storm (1921), as well as being one of the formative partners in United Artists studio. Griffith entered film initially as an actor in the second decade of commercial movie-making and became a director soon after – he in fact directed the very first film to be shot in Hollywood, In Old California (1910). He was also one of the first directors to expand films beyond short subjects as almost everything was before the 1910s – he wasn’t the first but was the chief populariser of the feature-length film.

The Birth of a Nation was D.W. Giffith’s first major hit, although attracted just as much controversy for its depiction of the Ku Klux Klan as the heroes and its implication that slavery was benevolent. Griffith’s greatest film was probably Intolerance, an epic that takes place across several different historical eras. Griffith never survived much past the advent of the talkie and only directed three films into the sound era, none of which were successful. He directed 532 films between 1908 and 1931, the bulk of these made between 1908 and 1914 – while this number does impress, the majority of these were short subjects made during his early years. Griffith’s only other venture into genre material was the Old Dark House thriller One Exciting Night (1922), although there are unsubstantiated claims made that he directed some of One Million B.C. (1940).

The Avenging Conscience was also one of the first screen adaptations of Edgar Allan Poe. There had been about a dozen adaptations of Poe works since 1908 but all of these were short works and this was the first full-length adaptation. D.W. Griffith has concocted a plot that has wound together three different Poe works – the short stories The Black Cat (1843) and The Tell-Tale Heart (1843) and the poem Annabel Lee (1849). Griffith also has the narrator read some of The Tell-Tale Heart and includes a picture of Poe himself at one point. This results in a somewhat ungainly work. Certainly, it never much resembles a traditional Poe film, especially when you compare it to the Roger Corman films of the 1960s – see The House of Usher (1960) – which identified Poe with a brooding Gothicism.

Griffith gives us a modern story – at least modern by 1910s standards – and there is little to it that we would recognise as a horror film (not that the horror film existed as a genre back in 1914). Indeed, you get the impression that Griffith has conceived The Avenging Conscience more as a Christian morality play – the film, for instance, is not too subtly subtitled after one of the Ten Commandments “thou shalt not kill.” Griffith himself was a Methodist and themes of Christian morality feature in many of his films. Poe’s stories dealt with guilt and torment but you could never say they came from a Christian perspective and there is not, as far as I am aware, any Christian iconography or elements that play throughout any of them.

However, what we get here is Poe served up as a rather dull drama about one man wracked by pangs of conscience. We see Henry B. Walthall having visions of Christ hanging on The Cross, God holding up stone tablets emblazoned “thou shalt not kill”, demonic figures with human bodies, animal hooves and heads dancing, the nephew tied to a chair and tormented by a skeleton, all of which seem a long stretch from Poe. Griffith was making his film before the era of The Cabinet of Dr Caligari (1919), which introduced subjective depiction and surrealism to cinema and you suspect if The Avenging Conscience had been made a few years later it might have been a very different film. The film also climaxes on the “it was all a dream” ending that was popular in the era, well before such became a cliche.

Certainly, D.W. Griffith demonstrates a great deal of assurance and craftsmanship as a filmmaker. If you consider that only a decade earlier, cinema was dominated by Georges Melies and his simple trick effects and single-camera placement set-ups, Griffith has matured considerably beyond this in the space of a decade, discovering things such as editing and the use of actors. In other words, Griffith took cinema more towards what we know in the modern sense – brought out storytelling, used the cinematic palette to evoke emotion and show actors performing. Characters, for instance, had little relevance in the films of Melies and his imitators – indeed, before 1910, actors featured so little that the players in a film were not even credited on screen.

For all that, The Avenging Conscience plays out as rather slow and long-winded today. There are some mild horror elements – the ghost of the murdered uncle appearing out of the fireplace to haunt Henry B. Walthall, the aforementioned dream sequences. The romance never much comes to life – certainly, Blanche Sweet seems far too frumpy and giggly to be Poe’s melancholy apotheosis of impossible love.