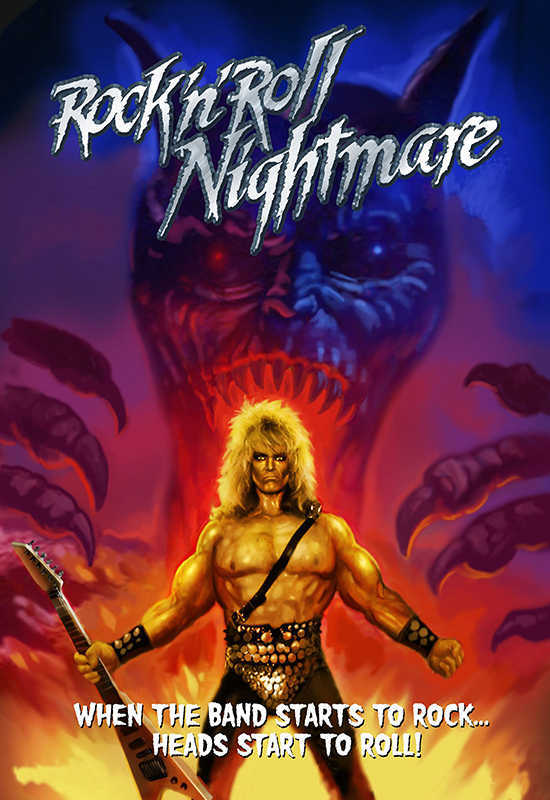 aka The Edge of Hell

John Triton, lead singer of The Tritonz, takes the band to a farmhouse outside of Toronto that has a recording studio set up in the barn so that they can focus on their next album. However, as the group gets to work and relaxes with their various girlfriends, they find demonic forces are lurking in the house and slaughtering the group one by one.

Jon-Mikl Thor is a rather fascinating figure. A former championship bodybuilder who had won both Mr Canada and Mr USA titles, Jon-Mikl became the lead singer for the Canadian heavy metal band Thor in the 1970s. The group is still together today and have put out some twenty-eight albums. Jon-Mikl became known for his elaborate theatrics on stage, which included sensational stunts, his bending bars and appearing in superheroic guise. During the 1980s, Jon-Mikl began to diversify and take up an acting/producing career in a couple of films with Rock’n’Roll Nightmare and the subsequent Zombie Nightmare (1987). He has made a handful of other film appearances, while there is also a documentary I Am Thor (2015) about his life.

Rock’n’Roll Nightmare is a film that promptly plunges down into hilariously bad movie stakes from about the opening scene where a still-screaming roasted skeleton pops out of an oven. In the subsequent scene, an overly long one with Thor’s panel band driving through the countryside and approaching the farmhouse, there is something laughable to the soundtrack, which ineptly mixes a rock song whenever the van is there and standard scary music in the cuts away to the house. Crucially, whoever was in charge of sound-editing spectacularly fails to mix the two together resulting instead in two pieces of music playing at the same time.

Jon-Mikl Thor has a handsome face, although is not much of an actor. (All of the others in the cast appear to be non-professionals as well). The one thing that is very noticeable is that Thor takes every opportunity to display his physique. In every scene, he is showing off his gorgeous tangle of golden hair or has his shirt artfully open to the waist to highlight his impressively buffed pecs.

Unfortunately, it is the horror aspect that causes Rock’n’Roll Nightmare to collapses into the completely ridiculous. The film has some of the most cheap and unconvincing makeup and puppet work of any film of the 1980s. Towards the end, we get a variety of these absurd creature effects – a plate of leftovers in the fridge moving; a one-eyed puppet creature that you cannot help but think resembles a penis; a lizard-like Devil figure that is incredibly immobile; even a puppet that sits and smokes cigarettes.

Even funnier is the end revelation [PLOT SPOILERS] that the lizard figure is The Devil, while Jon-Mikl Thor reveals that there was no band, he created them all out of his own head, and that he is in fact an angel called The Intercessor. He then suddenly appears with bare chest, wildly bouffed hair, cape and studded jockstrap to take on and fight the Devil, a badly choreographed fight with the immobile lizard puppet, that takes place while a song pounds on the soundtrack. Thor’s eyes are lit up and fire beams but the animated opticals are so badly patched in they fail to even sit in the same place on the screen as his eyes. It all arrives at a dream ending that fails to make sense.

John Fasano went on to direct another heavy metal horror film with Black Roses (1988) and the vampire film The Jitters (1989). He did direct Jon-Mikl Thor in two other films, both non-genre, Murder at the Presidio (2005) and A Family Lost (2007). Fasano has written the scripts for a number of other genre works including the tv movie The Hunchback (1997), Universal Soldier: The Return (1999), Megiddo (2001) and Darkness Falls (2003), as well as created the zombie tv series Woke Up Dead (2009).