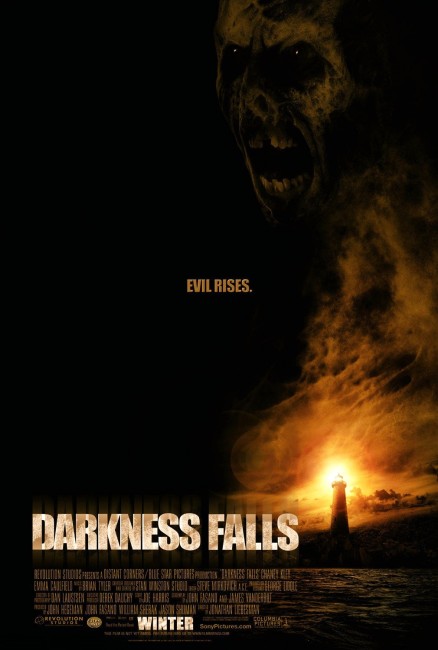 In the town of Darkness Falls, a legend has grown up around Matilda Dixon, an old woman from early last century who used to give children a gold coin in return for their baby teeth, which earned her the nickname The Tooth Fairy. Matilda was then badly burned in a house fire that caused her face to become hideously deformed and sensitive to the light, forcing her to wear a porcelain mask to hide from the townspeople and to only come out at night. Believed responsible for the death of two children, she was burned at the stake and died placing a curse on the town. Young Kyle Walsh puts a tooth under his pillow for the Tooth Fairy but then sees the hideous Matilda arrive to take it. As part of the curse she placed on the town, Matilda kills all who look upon her face and Kyle’s mother is killed when she comes in after hearing his screams. Twelve years later in the present day, Kyle’s childhood friend Caitlin Green calls him up, asking for help. Her younger brother Michael experiences the same night terrors that Kyle did and refuses to turn out the light. Kyle returns to Darkness Falls, where he realizes that Michael has also seen the face of Matilda. Coming to claim Kyle at long last, Matilda kills another man who sees her face – only for Kyle to be arrested for the murder. As Matilda comes after him and Michael and starts killing people all over the town, Kyle tries to find a way to stop her menace for good.

Darkness Falls was a studio-made horror film that was designed for multiplex release (rather than video where most horror goes to these days). This is perhaps Darkness Falls‘s fatal flaw. It received terrible notices in the US – although if anything, it is only a formulaic horror film, by no means the utter turkey many dismissed it as when it came out.

There is a passable opening, which certainly provides a few jumps and has the wonderfully eerie image of the old witch horizontally stretched out hanging from the ceiling above a doorjamb. Thereafter however, everything slips into packaged formula. Certainly, there is an adequate tension produced during the escape from the hospital, even if the script does improbably require an awful lot of lights and torches to all have to suddenly start failing or blowing out just as the heroes are passing. Ultimately, Darkness Falls is a film that feels like it has been slickly put together, produces a few jumps but never anything too scary that would leave its primarily teen/early twenties audience going away disturbed (or even remembering the film five minutes after leaving the theatre).

The story is a rehash on A Nightmare on Elm Street (1984). In both films, the central menace is a boogie person from the town’s repressed past who has come back to kill their young in revenge, while the only means of surviving in both films is for the protagonists to stay awake. (Darkness Falls also has a great many similarities to They (2002), another teen horror that came out around the same time also featuring creatures that attack only when it is dark and are afraid of light).

The great fault of the script is that it has only created a generic boogie person. As the film opens, we are given a backstory about the old woman having her face burned and forced to hide it from townspeople and only be able to come out at night. These scenes are a fine piece of cod myth-making. However, these details are then improbably extruded out to become a set of rules akin to the ones a vampire is pinned in by – we go from the old woman hiding her face behind a mask to her being bound to kill anyone who sees her true visage; we go from her hiding from the townspeople and only coming out at night to light actually burning and being able to kill her. We are never given any particular explanation as to why these should go from background details to a series of cast-iron supernatural rules.

Moreover, the film never quite grapples with the morality of its avenging ghost. We are told that Matilda was an innocent woman lynched out of town prejudice because she was disfigured. However, when we encounter her in the present-day, she appears as an evil and insane ghost. There is no sense that she is an avenging soul seeking retribution and the film has no sympathy for what was done to her. In other words, in painting her as evil, Darkness Falls inadvertently ends up justifying lynch mob mentality.

Jonathan Liebesman subsequently went onto make The Texas Chainsaw Massacre: The Beginning (2006), which has a gore-drenched grimness that is everything that Darkness Falls lacks, followed by The Killing Room (2009), the big-budget alien invasion film Battle Los Angeles (2011), Wrath of the Titans (2012) and Teenage Mutant Ninja Turtles (2014).