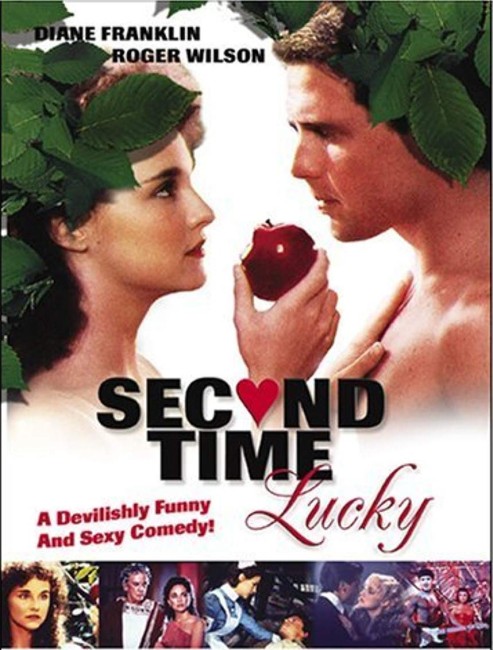 God accepts a bet with The Devil that if the Garden of Eden were rerun again then The Devil could still succeed in tempting Mankind. At a party in the present-day, Adam Smith meets and is attracted to Evelyn or Eve. The party is then raided by the police. Adam is taken by a motorcycle officer – in reality the angel Gabriel – and whisked back to Eden. Eve is also placed there. Both their memories are wiped and they left in a state of innocence. Gabriel warns Adam of temptation by The Devil, something that will be signified by his getting an erection. Despite the warnings, the Devil succeeds in tempting Eve and she then seducing Adam. As they are both reincarnated throughout history – in Ancient Rome, on the World War II French battlefields, as gangsters in the 1930s and rock stars in the present day – Adam has to fight Eve’s attempts to sexually tempt him and to let true love win through.

I am certain in my belief that this witless softcore romp through Judaeo-Christendom is the possibly the worst film listed on this entire site. It was directed by Michael Anderson, a regular genre contributor, mostly known for the hatchet jobs he has conducted on otherwise excellent books, including the likes of George Orwell’s 1984 (1956), the classic pulp hero Doc Savage – The Man of Bronze (1975), Logan’s Run (1976) and Ray Bradbury’s The Martian Chronicles (tv mini-series, 1980). Here Anderson gets to take on and do a thorough botch-up on no less than The Bible itself. (See bottom of the page for Michael Anderson’s other genre credits).

Second Time Lucky is a film that is too stupid to consider taking its theological implications seriously. What is more annoying is the ill-thought out premise and the gross inconsistencies and illogicities that keep pricking their heads throughout the film – like how the script has Adam and Eve ignorant of their past selves in each era they are incarnated in, fair enough, but will then blatantly ignore this whenever it suits a particular part of the story. Or how it will frequently have Eve fully conversant with her new surroundings yet Adam totally confused.

The first three sequences, set in Eden, Rome and WWII era Occupied France are beset by some of the most hideous innuendos – the sights of Jon Gadsby lecturing Roger Wilson as to how his erection is the sign of temptation or Robert Helpmann’s camping as The Devil are almost unwatchably embarrassing. However, in the subsequent sequences the story starts to incredibly enough take itself seriously, winding up to a dreadfully sincere homily on true love. Although the credibility of such is thrown away by such prize moments as when Diane Franklin bares her breasts as targets for her firing squad. Michael Anderson directs with his customary leadenness, which only makes all the innuendo and smutty jokes flop like limp balloons.

Considering the degree to which Diane Franklin substantially displays her naked body throughout and the amount of sexual innuendo, it is surprising that Second Time Lucky was only released with a PG certificate in many countries. The one plus is the New Zealand location photography (although a sheep station fails to make a convincing stand-in for Occupied France). It is interesting how the natural landscape of New Zealand seems to represent the untouched, unspoiled Eden – in the early 1980s, the Bo Derek project Eve and That Damned Apple was also projected to come to NZ to shoot, although this failed to go ahead.

Michael Anderson’s other genre films include an adaptation of George Orwell’s 1984 (1956); The Shoes of the Fisherman (1968), a political thriller concerning a near-future Pope; Doc Savage, The Man of Bronze (1975), based on the pulp hero; the dystopian sf film Logan’s Run (1976); the killer whale film Orca (1977); the psycho-thriller Dominique (1978); the tv mini-series adaptation of Ray Bradbury’s The Martian Chronicles (1980); the thriller Bells/Murder by Phone/The Calling (1981) about killer telephone calls; the John Varley time travel film Millennium (1989); the tv movie remake of 20,000 Leagues Under the Sea (1997); and The New Adventures of Pinocchio (1999).