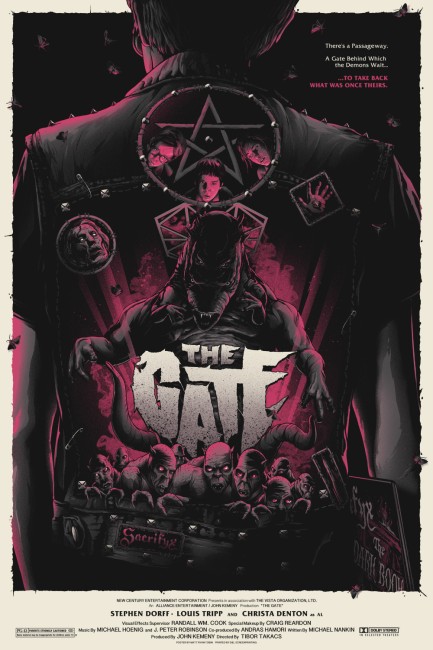 When workmen cut down a tree in young Glen’s backyard, he and his best friend Terry discover that they have inadvertently opened a gateway that can release ancient gods on certain nights of the year – this being one of those nights. With Glen’s parents away for the weekend, they try to reseal the gateway only to discover that the rites to release the demonic forces have been accidentally conducted. Now they suddenly find the house is being overrun by the forces of darkness.

The Gate received some good write-ups in the genre press when it came out and was reasonably well regarded. Seen a few years later, it proves to be a surprisingly ordinary effort.

It has been construed as little more than a juvenile-oriented variation on Poltergeist (1982). In this regard, it is certainly a competent enough film. The children, which include a thirteen yer-old Stephen Dorff among their number, are drawn reasonably well. There is a certain subversive amusement to the idea of having them find the means of combating the demonic forces inside a heavy metal album.

The film is especially good in the area of effects. Some of the effects of bodies collapsing to dissolve into goblins or the workman zombie disappearing into the wall that then closes to reveal no trace whatsoever are well done. However, despite their inventiveness, the effects are only pop-up tricks and The Gate not much more than an Empire/Full Moon film with a larger budget. The film, by the time its scant running time is over, seems frustratingly slight.