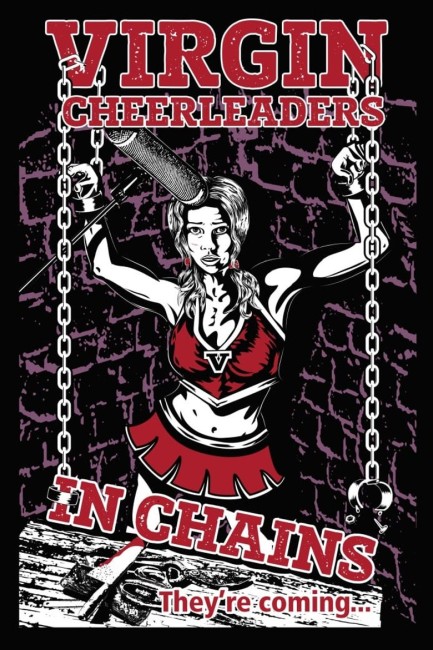 Shane is a novice writer trying to sell his screenplays but only accruing rejections. He then comes up with the idea for a new film called ‘Virgin Cheerleaders in Chains’ and decides to direct it himself. With the aid of his girlfriend Chloe, he sets out to raise the money, struggling with investors and an uncompleted script. The production comes together and they go to film at the farmhouse of the father of lead actor Mike Beale. However, there are people lurking around the property with deadly intent.

You have to admit that the film has a wonderfully trashy exploitation title. It suggests something of a lost 1970s exploitation film, one that probably would have been directed by Jess Franco. It was enough to get my attention and sitting down to watch. Paulo Biscaia Filho jumps in with a faux grindhouse style – the now cliched look of flickering sprockets and faded film – that suggests he is making a homage to the era.

On the other hand, the film falls flat on its face right out of the starting gate. The title telescopes down to nothing more than the name of the film the wannabe director is trying to make, which seems a major cheat. The trashiness the title suggests comes out with a thorough tameness – this is no more evident than the scene where director Ezekiel Z. Swinford visits a stripper bar to recruit his lead actress and we see Elizabeth Maxwell doing her act, represented by her chastely dancing with her bare back to the camera. When a film has a timidity of spirit and seems to be toeing the censorship line to the extent of failing to even hire an actress who is prepared whip their clothes off to play a nude stripper (or even substitute a body double), how you possibly have any respect for the filmmaker and their ability to follow through on an outrageous, attention-getting title?

A few years ago we had a spate of slasher and horror films that all took place on the set of other horror films with the likes of Lights Camera Dead (2007), Skeleton Crew (2009), Bleading Lady/Star Vehicle (2010), Fright Flick (2011) and Silent But Deadly (2011), as well as the subsequent Cut Shoot Kill (2017). You suspect that the depiction of the making of the film we see here mirrored the way that Virgin Cheerleaders in Chains was made in real life. This is conducted with some reasonable characterisations and performances on the part of the actors.

What is surprising given such a tongue-in-cheek title is that all of this is played seriously and not as a comedy. The film certainly gets bloody when it starts killing its cast off in the latter third. There are a couple of scenes that seem to be spoof the genre – like where Michael Taylor Morford makes a leap from a balcony only for the camera to reveal it is only two feet high and then takes on a dog defending himself with a puny penknife – but you feel the film needed more of that.

There is a sense of rubber reality where you are not quite sure if what you are watching is real or part of the film being shot. In the deliberate blurring of the line between being a film depicting the shooting of a horror film on one level and on another level there being a film within the film about filmmakers being stalked and killed. It becomes difficult to work out which scenes are meant to be about the filmmakers making the film and which ones are part of the film within the film. This is something not helped by the fact that the crew play the same characters in either film. There is a predictable end twist pullback.