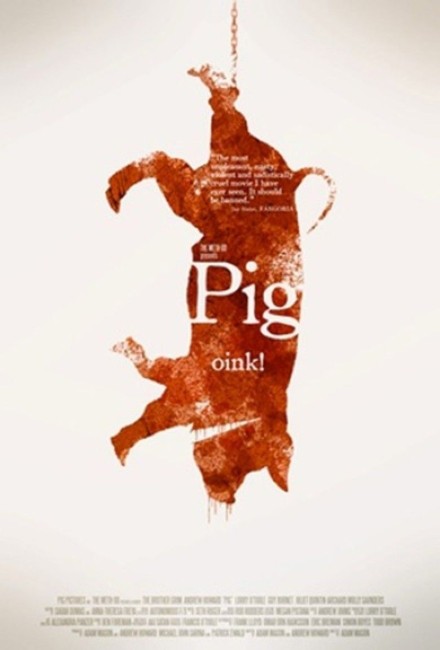 A man lives in a caravan in the desert with Savannah, a mentally handicapped woman he keeps in a cage. He has abducted several people and keeps them prisoner. He recaptures and kills one who has made a getaway, cooking her liver for he and the others to eat. He now tortures, psychologically humiliates and hunts down the couple that he keeps prisoner.

Pig is a collaboration that is written by Adam Mason and actor Andrew Howard who has been in everything that Mason has made since The Devil’s Chair. Constant frustration with finding funding has been a fuel that has fed back into a number of Mason’s other films. In the case of Pig, Mason and Howard decided to make a film that they shot rough, to take the material as far as they wanted and extend the middle finger to distributors by releasing the result online for free.

Pig could be a version of Adam Mason’s Broken, which all also took place outdoors and concerned a man who kept women prisoner, reconceived as a film that takes place in real time. Pig certainly holds you with the rawness of its opening as Andrew Howard snatches a woman escapee (Juliet Quentin-Archard), batters her with his forehead and then brings her dead body back to his open-air encampment, as all the while with savage irony a dating guru talks about the way to handle women on the radio.

Things expand outwards, slowly revealing other aspects of the junk-covered encampment, to the point where we wonder what on Earth is going on. We see that Howard keeps another woman (Lorry O’Toole) chained up on a blanket where he abuses her, urinates on her and during the climactic scenes drags her into a corral he calls his Rape Pen. He has another intellectually handicapped woman (Molly Black) that he refers to as “baby” – where we are not sure whether she is his girlfriend, wife or daughter – who is kept pregnant and locked up in a cage – at one point, we see him drawing blood from the swollen belly to cook with. There is also another man (Guy Burnet) chained up that he and Molly Black release and use as target practice and then perform indignities on his dying body – “I’ve never stuck a screwdriver up someone’s ass before” Howard exclaims in glee. The dead woman from the opening moments is later gutted and her liver cooked on the campfire.

Pig is a film that you can genuinely say challenges all commercial filmmaking. The camerawork is ragged and raw, the film often dull and monotonous due to the restrictions of the format. While most of the other long shot films make a virtue of lengthy rehearsal processes, much of Pig gives the impression it was improvised or ad libbed in camera. The film especially tries ones patience in its constant pandering to Andrew Howard’s eccentricities, including at one point he wandering around in drag. These are however superseded by the imbecilic performance of Molly Black, which is something that tries the patience of even the hardiest cinemagoer. The film doesn’t so much reach a resolution as come to a bizarre left field ending where backwoods maniac Andrew Howard puts on a suit, turns the site over to a caretaker and flies off in a plane to, it is implied, a job at a Hollywood studio. It is also never explained the significance of the title Pig – no such animal ever turns up throughout and one is left to assume it refers to Andrew Howard’s brutish behaviour.