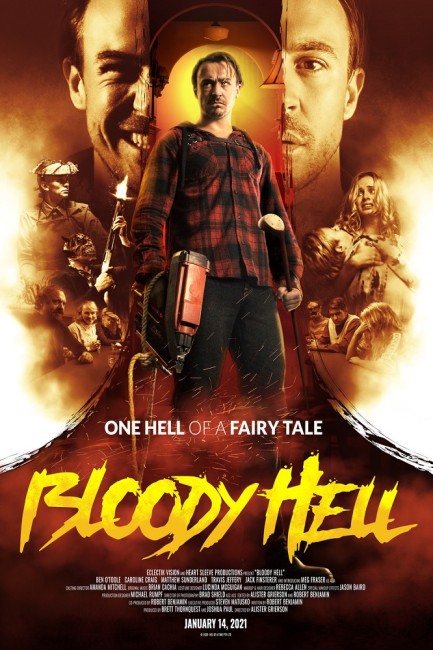 In Boise, Idaho, former soldier Rex Coen is waiting in line in a bank when armed robbers break in. Rex is able to grab a gun and blasts away all of the robbers, although ends up inadvertently killing a member of staff. For this he is sentenced to eight years for manslaughter. Upon being released from jail, he finds himself in the midst of a media spotlight where he cannot turn without cameras being on him. While in jail, he fired a spitball at a world map and it landed on Finland. He immediately decides to head to Finland to get away from the attention. At the airport, Rex is unnerved by a strange family sitting nearby staring at him. He arrives in Helsinki and takes a taxi only to be gassed and knocked out. He comes around imprisoned in the basement of the family’s home, shocked to find his right leg has been removed. The daughter Alia tells him that he has been abducted to be served as food to the hulking Pati. Rex’s only hope to escape comes in appealing to Alia who has taken a liking to him.

It took me a long time to get a handle on Bloody Hell. This is in large part because the film comes with a long preamble and gives no clear idea where it is going. The first fifteen minutes are taken up by the story of Ben O’Toole foiling a bank robbery and going to jail for eight years. He is then released to discover that he is the focus of an intense media spotlight and decides to get away from it all and go to Finland.

We get hints of what is to come when Ben O’Toole goes to the airport and finds a strange family staring at him (although you cannot help but think that this would make it fairly expensive if the family have to take an international flight every time they sought to lure one of their victims). Eventually we come to the great hook of the film where Ben O’Toole comes around in their basement, chained up to find one of his legs missing below the knee.

It is here that Bloody Hell reveals itself as an Imprisonment Thriller. The strange family with the hulking cannibal son also makes this a Backwoods Brutality film of sorts, while the treatment of Finland (all the scenes were actually shot in Australia and the cast had to learn to speak Finnish for the roles) makes this resemble the fear of strange places in remote corners of Europe that we had in Hostel (2005).

Like most entries in the Imprisonment Thriller genre, Bloody Hell twists and contorts around hopes of escape and then seeing these dashed. This comes with some darker twists than most – at one point, Ben O’Toole has the young son David Hill held between his legs where he is threatening to strangle him. Perhaps the strangest scene is when he is finally handed the knife he demands and picks it up with his foot, bringing it up to his face – a position that would be physically impossible ie. requiring him to bend his leg backwards at the knee and touch his face while in a standing position.

This is Backwoods Brutality with an oddball sense of humour that simmers beneath the surface. I really wasn’t quite sure for much of the film whether this was an actual sense of humour or just Alister Grierson going for an over-the-top cartoonishness. Things are made peculiar by the long intro involving the bank robbery scenes, which are not that relevant and only seem to come into play towards the end of the film.

One of the stranger additions is a double of Ben O’Toole who acts as an Imaginary Companion throughout. It’s a bizarre head scratcher in a film like this – I mean, can you really see Marilyn Burns’ Sally Hardesty in The Texas Chain Saw Massacre (1974) having conversations with an imaginary double of herself? The film does arrive at an entertainingly violent and over-the-top ending that redeems much of the show.