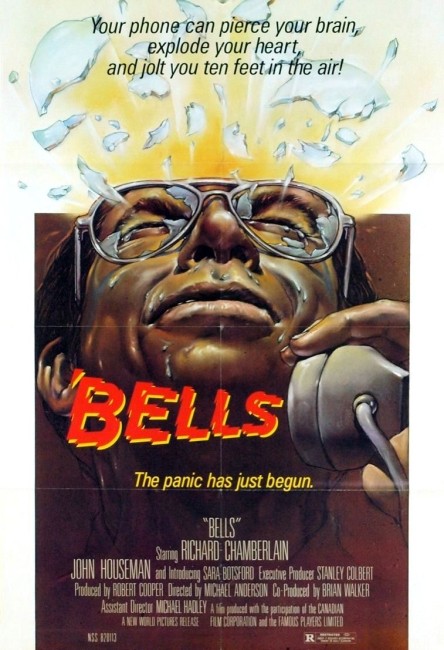 aka The Calling; Murder By Phone

While travelling to another city for a conference, environmentalist Nat Bridger agrees to pick up the belongings of a friend’s daughter who has died. There Bridger becomes fascinated with the circumstances of the girl’s death where she was reportedly blown up by a public telephone in a subway that one witness says “emitted lightning”. Bridger’s investigation takes him inside a telephone company cover-up in search of an embittered employee who has developed a means of transmitting deadly explosive signals down telephone wires.

This thriller was from director Michael Anderson (1920-2018). Anderson, whose directing career spanned fifty years, had some with fame with films like The Dam Busters (1954) and Around the World in 80 Days (1956) but is more known within the genre for his ham-fisted butcherings of original literary works in the likes of Doc Savage – The Man of Bronze (1975), Logan’s Run (1976), the tv mini-series The Martian Chronicles (1980) and Millennium (1989). Anderson is also responsible for what is perhaps one of the worst films ever made – Second Time Lucky (1984). (See below for a full listing of Michael Anderson’s genre films).

Here Michael Anderson does a passable job of turning an everyday item – the telephone – into an object of unease. However, Bells seems confused about what it wants to be. It draws on the post-Watergate conspiracy thriller with various scenes of official blocking, evasions, cover-ups and so on. Unfortunately the motivation for the killings has nothing whatsoever to do with a widespread cover-up – it is a more mundane underdog seeking revenge plot – and as a result the paranoid thriller tone of the film is at odds with what the script is actually about. The entire mood of the film in the first half ends up being one big red herring.

The phone killings are thoroughly silly – victims start shaking, bleed, then blow up and are thrown across the room. In some shots, one can clearly see the cut from a person to the dummy that is blown up. Although surely the most colossal moment of implausibility is that within moments of Richard Chamberlain ringing up the faults division of a phone company that a repairman would turn up to a subway station to replace the phone. The film’s plot about an underdog seeking revenge for the petty injustices of life does get petty – he blows up an IRS clerk because one of his forms has been lost or a bank teller for turning him away after the bank has closed.