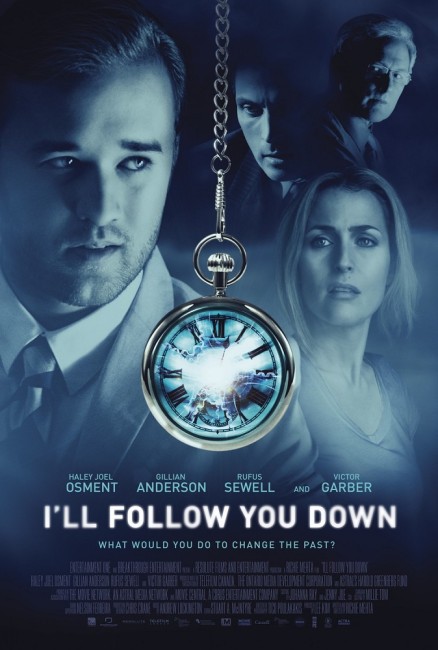 In Toronto in 2000, young Erol Whyte and his mother Marika sees his father Gabriel off at the airport to attend a conference in New Jersey. However, Gabriel never comes back and despite a police search appears to have entirely vanished. Twelve years later, Marika is suffering from mental health issues as a result of this, while Erol has grown up and followed in his father footsteps to become a brilliant physics student. His grandfather, Marika’s father Sal, comes to him with Gabriel’s research notes and says he believes that these show that Gabriel built a stable wormhole that allowed him to travel back in time to 1947. Erol dismisses the idea until his mother commits suicide with an overdose of pills. He finds evidence that indicates his father may have died back in 1947. He throws himself into completing the project with the intention of going back to save his father. Just as his girlfriend Grace announces that she is pregnant, he realises that travelling back and reuniting the family may mean creating a timeline in which he never got together with her.

I’ll Follow You Down was a complete unknown when I went to see it. The poster suggested something more akin to a ghost story. The synopsis suggested more of a thriller type drama about how a family piece together what happened to their missing father. Director Richie Mehta was an unknown who had previously only made the film Amal (2007) about the life of a New Delhi rickshaw driver, which I have not seen.

If nothing else, the cast list intrigued one – Gillian Anderson, internet pin-up queen as the former star of tv’s The X Files (1993-2002, 2016-8); Victor Garber, one of the leads from the fine J.J. Abrams tv series Alias (2001-6); and Haley Joel Osment, the now grown-up kid from The Sixth Sense (1999) who seems to be trying to shake child typecasting (something not exactly helped by the fact that he still has boyish features, which may well be the reason he sports designer stubble throughout, even has his introductory scene in bed prominently highlighting a hairy chest to show us that he is now a man no longer a child actor).

Soon after it starts, I’ll Follow You Down slows down to a near-standstill. We get half-an-hour of slow melodrama about the disappearance of father/husband Rufus Sewell and everybody reacting to the aftermath. The pace of the film is so measured and dull you could easily fall asleep. Everything is shot in the perfectly composed and stuffed look of a Lifetime tv movie. It takes a long time before I’ll Follow You Down keys you in that it is a time travel film. One’s immediate reaction to this is that it leaves us with a film rich in possibilities. Instead, it rapidly becomes apparent that what we have is a film that avoids almost all of them. There is much in the way of talky discussions about what might happen – where at least Richie Mehta appears to have done some research on the physics of time travel.

In recent years, there have been some excellent time travel films dealing with time conundrums, paradoxes and so on – see the likes of Twelve Monkeys (1995), Primer (2003) and Looper (2012), even The Butterfly Effect (2004). These grasped at the conceptual possibilities of their premises and were rewarding as a result. In contrast to these, Richie Mehta prefers to talk everything out and anguish over the personal issues rather than leap in and show the rich conceptual possibilities the genre holds.

Good science-fiction is something that says What If and then explores what might happen after that. You can point to any of the above time travel films as good examples of this. By contrast to these, I’ll Follow You Down is a time travel film that suffers from conceptual cowardice. It is a film afraid of any possibility that a discovery might hold and only looks to the negative aspects. Before the invention has even been activated, for instance, Haley Joel Osment’s girlfriend Susanna Fournier is worried that this will mean they won’t get together and will lose their unborn child. (If anything, you could argue that this is a time travel film with a Right to Life agenda).

Finally, once the device is working and Haley Joel Osment travels back to 1947 to find his father just before his fateful attempt to go and meet Albert Einstein, his journey back into the past consists of nothing done to explore its world but solely to make a plea to his father is that the experiment is wrong and he should turn back and think of the mental instability it has caused wife Gillian Anderson and the amount of misery he has caused poor Haley Joel by leaving him with no father.

In other words, what we have is an absurdly biased straw figure argument intended to make the case that such scientific experimentation is wrong and should be avoided. What the argument seems to avoid is the myriad of possibilities that are not mentioned. Who is to say that Haley Joel and Gillian Anderson would have necessarily had any happier lives with a reunited family? Why could he not just have gone back to just before the father was killed and rescued him then, why throw the whole experiment out the window? Should an experiment and its possibilities be entirely abandoned just because of a single scenario in which the outcome was that Rufus Sewell was killed? Are there not safer options or temporal destinations? Would it not be possible for Rufus Sewell to go back and visit the same time again forewarned?

In other words, what we have is a film that puts the protection of the family and their hurt feelings above any world-changing possibilities inherent in a scientific discovery. A comparable example might be someone having a loved one killed in a motor vehicle accident and deciding that the only option to prevent this happening is to go back in time and prevent the car from ever being invented, where consideration for personal feelings and the safety of protecting people from any upset is allowed to entirely trump any other possibility that a discovery might hold. It might be worth noting that the classic work to take this line of argument regarding science was Mary Shelley’s Frankenstein (1818), which was all about the idea of creating life and then its creator running away in horror and anguish and what he has wrought.