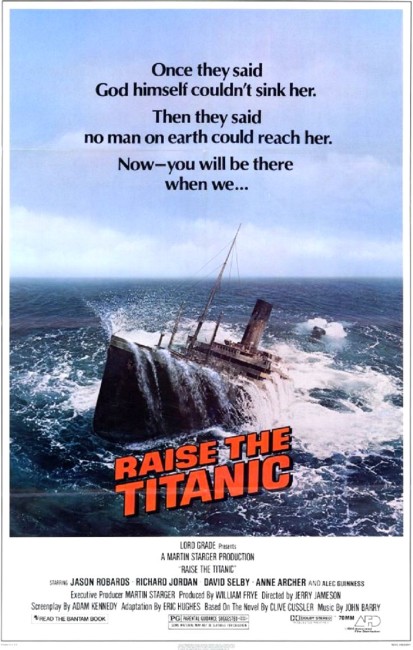 The US uncovers plans for The Sicilian Defence, a new weapons system that will erect a forcefield that will be impervious to any missile attack. However, the only thing powerful enough to fuel the system is the rare mineral Byzanium. The only known source of Byzanium was mined on the remote island of Swardlov in the Baltic in 1912. Back then, the miners attempted to get back to the US with the supplies pursued by Russians agents but the ship they chose to board was The Titanic and all the supplies sank aboard it. And so the US Navy come up with the far-fetched scheme of raising the wreck of the Titanic to obtain the Byzanium. The man chosen to head the massive engineering operation is maverick former Navy officer Dirk Pitt. He must not only locate the wreck of the Titanic but dive in submersibles to place flotation devices that will raise it to the surface. However, a spy aboard the fleet has alerted the Russians as to what is happening and they attempt to stop the operation.

Raise the Titanic! (1976) was the third novel from American author Clive Cussler. Cussler served in the Air Force during the Korean War and then entered the advertising industry. He began publishing with The Mediterranean Caper (1973), which introduced his adventurer hero Dirk Pitt, who has gone on to appear in 23 other books to date (with those from 2004 onwards being co-written by Cussler’s son also named Dirk). All of these are sea-based and treasure-hunting adventures featuring Pitt in a series of globe-spanning quests, facing various super-villains and world-threatening schemes. Numerous of the books feature fantastical subject matter, including the search for Atlantis, the discovery of the remains of the Peking Man and Captain Nemo’s Nautilus, and the truth behind The Odyssey and Jesus Christ. Cussler has written several other series of books as well and founded the real-life National Underwater and Marine Agency (the same fictional one that Dirk Pitt works for) that has dived and discovered numerous shipwrecks.

Most notably, Grade was the one who gave Jim Henson the backing to go ahead with The Muppet Show (1976-81) when he could not obtain US financing, where Henson repaid the favour by portraying a fictional counterpart of Grade as Orson Welles’ Lew Lord in The Muppet Movie (1979). During the 1970s, Grade and ITC moved into film production, producing large-scale international productions such as The Eagle Has Landed (1976), Voyage of the Damned (1976), The Boys from Brazil (1978), Capricorn One (1978), Sophie’s Choice (1982) and Jim Henson’s first non-Muppet film The Dark Crystal (1982). Grade was knighted as a baron by the Queen in 1976.

Grade became excited about making a film out of Raise the Titanic, envisioning a series of Dirk Pitt films that would rival the James Bond series. The script went through a purported seventeen writers. The largest problem the film faced was the central premise of the book – the raising of the Titanic. Grade kept demanding that a larger and larger model be built and eventually a seventeen-metre (55 foot) long model was constructed at the cost of nearly half a million dollars, only to discover that there was no water tank in the world large enough to film it, necessitating that a ten million gallon tank be built offshore in Malta, adding a further $6 million to the budget. (Grade later wryly commented that “it would have been cheaper to lower the Atlantic”). Raise the Titanic was completed in 1978 but not released until 1980, a period that also saw a string of flops for ITC’s film division including the Village People film Can’t Stop the Music (1980), the science-fiction film Saturn 3 (1980) and the failed revival of The Legend of the Lone Ranger (1981). In 1980, ITC began to lose its standing and the company was brought out and Grade forced to resign.

Seeing the film, it is hard to work out where all the money was spent – a $40 million budget in 1980 would be up around the $200 million mark now. And yet the model photography of the submersibles looks exactly like they were filmed in a bathtub, while the shots of the sunken Titanic look like macro closeups of a child’s toy. Two-thirds of the film seems to consist of out-of-focus cameras planing over painfully obvious models in murky water. The dramatic interest in watching a film filled with out of focus models slowly moving about is absolutely zero. Audiences of the day thought so too and the film sank badly at the box-office, only earning around $7 million worldwide.

At least the size of the operation in well-detailed – all the ships at sea and helicopters flying about are undeniable impressive. The icy ocean and Cornwall locations give an impressive scope of frame that the model scenes sorely lack. However, the entirety of the budget seems to have been expended on the seventeen-metre long model of the Titanic, which is seen exploding to the surface in slow-motion in the film’s singularly most majestic image. When the camera cruises its length, water coursing off its rusted hulk, it really looks like a full-size version of the ship. It is such a magnificent vision it almost makes up for the cruddiness of the rest of the effects.

Raise the Titanic was sold as part of the 1970s prevailing trend for Disaster Movies, although it feels less a disaster movie than (sort of) The Poseidon Adventure (1972) in reverse and without the accompanying soap opera plots. More so than the disaster genre, it feels like one of the big-budget jet-setting international thrillers that were very much in vogue throughout the decade – see the likes of The Day of the Jackal (1973), The Odessa File (1974), The Eiger Sanction (1975), Three Day of the Condor (1975), Marathon Man (1976), The Boys from Brazil and The Formula (1980).

The plot, despite an interesting and intriguing premise, is unimpressive, losing out a massive deal because the model scenes add no conviction at all to the technical drama. The human side of things – the triangle set up between Richard Jordan, David Selby and Anne Archer – is conducted with not much enthusiasm – she feels like she is there just so the cast could have a token woman. The dramatics are stolid – there is very little drama to a film that involves people sitting about inside submersibles and/or the bridges of naval ships talking into microphones. Alec Guinness turns up and does well in a brief cameo as an aging sea dog who survived the sinking of the Titanic. Dirk Pitt never emerged as the lead of a series of films as Grade envisioned but Richard Johnson at least plays with a physical and commanding presence that you feel could have worked.

The ending in Cussler’s book, in which the operation was improbably shown to have been a ruse to set up a US puppet as Russian Premier, is changed for a far more downbeat ending, throwing out the Russian ruse and with Pitt and Seagram deciding to leave the Byzanium buried in Cornwall in the interests of world peace – although why any US President would give up the perfect security system to make a bomb, as Seagram speculates, makes the reasoning behind this hard to believe. There have been a number of other aspects of the book that have been trimmed – you cannot help but think that the sequence where the Russians invade and try to claim the Titanic would have made for great drama.

Clive Cussler was not happy with finished result, vocally stating that the filmmakers had gutted his book. As a result, he refused to release the rights to any of his other works unless he had script and casting approval. This eventually occurred with Sahara (2003) where Matthew McConaughey was cast as Dirk Pitt, although Cussler was not happy here either. This ended up with he and the producers fighting in court with Cussler claiming they made the film without his approval only for him to lose when the company countersued claiming the film had lost profits due to Cussler’s public criticism.

The discovery of the wreck of the Titanic in September 1985 by the French-American expedition led by Robert Ballard proved Clive Cussler wrong. Contrary to his fictional speculation, The Titanic sank at the position she had been reported. More crucially though, Ballard discovered the wreck of the Titanic had split into two sections – something accurately depicted in James Cameron’s Titanic (1997) – as well as the smokestack having come off and debris scattered over a two square mile area, thus making it unsalvageable. The site of the wreck has since become an expensive tourist destination, being inaccessible except for highly-pressurised submersibles – there was even a couple who were married aboard one such landed on the wreck’s bow in 2001.

Director Jerry Jameson had premiered with the rather silly horror movie The Bat People (1974). Jameson dabbled in the disaster movie for a time – he made the big hit of Airport ’77 (1977), the quite good meteor collision tv movie A Fire in the Sky (1978) and subsequently the theatrically released tv movie Starflight One (1983) about a plane trapped in orbit. Jameson has spent the 1980s onwards working in episodic television.