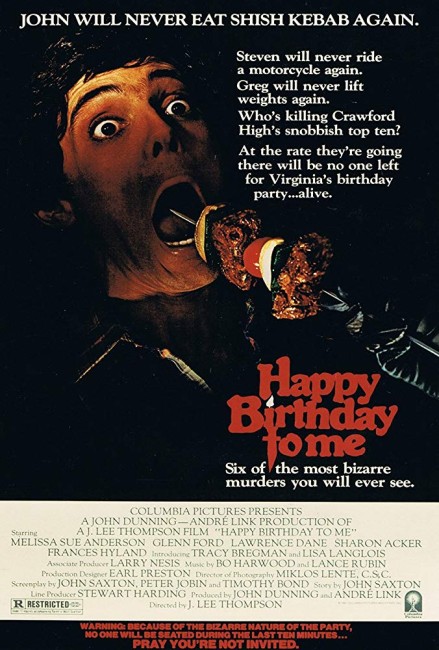 At the Crawford Academy, Virginia Wainwright belongs to the social clique known as The Top Ten. The members of the Top Ten then start being killed off in bizarre ways. As Virginia’s birthday approaches, she comes to believe that the identity of the killer may be linked with her own shadowy past, something to do with the accident that killed her mother on a previous birthday and left Virginia with brain damage and memory lapses about what happened.

Happy Birthday to Me was another entry in the early 1980s cycle of slasher films that began with Halloween (1978) and Friday the 13th (1980). Like many of the copycat slasher films, it features a holiday date-themed title. (For more detail about slasher films see Slasher Films).

Happy Birthday to Me holds some promise over the other entries in that it has someone who had a respectable resume prior to the slasher cycle at the helm – none other than J. Lee Thompson, a British director who had made Cape Fear (1962), McKenna’s Gold (1968) and various other films (see below for Thompson’s other genre entries). Cape Fear, in particular, is a masterful film noir thriller. The prowess that J. Lee Thompson displayed there is something that should in theory set any slasher film light-years ahead of the competition.

Alas, by the 1980s, J. Lee Thompson’s career was well on the way down towards indifferently accepting whatever assignment paid the bills for him – ahead for him would be the astonishingly bad remake of King Solomon’s Mines (1985) and a slew of dreary Charles Bronson vehicles for Cannon Films. Seeing Happy Birthday to Me, it is hard to believe such a crudely pitched film could come from the same person who directed Cape Fear.

Other works of the era like the Friday the 13th sequels stripped the slasher film down to a minimum of exposition; J. Lee Thompson, being an old school director from an entire different generation to John Carpenter, Sean S. Cunningham and co, plays by the book and lets the film operate more akin to a traditional psycho-thriller. Thus it is far more plotted than most of the slasher films – where you keep expecting a series of stalk and slash sequences, Thompson only drags the show out with exposition.

Happy Birthday to Me has little going for it beyond the usual tedium of the slasher film. The film was advertised with the marketing campaign “six of the most bizarre murders you will ever see”. While the film never takes any award for on-screen originality in this department, it does serve up a mildly novel series of deaths that include:- Matt Craven getting a shish kebab in the head; Richard Rebiere being crushed by weights during a bench press; Michele Rene Labelle having his scarf thrown into the spokes of a motorcycle wheel. There are some very gory scenes of a surgeon cutting into a brain that are repeated several times, although it is not clear what they have to do with the rest of the film.

Happy Birthday to Me does have nineteen-year-old Melissa Sue Anderson, America’s darling on tv’s Little House on the Prairie (1974-83), as lead actress and the film gets an undeniable frisson when she abruptly turns and coldly shoves a shish-kebab skewer through Matt Craven’s throat.

Purportedly, there never was intended to be a twist ending to the film until the producers insisted that one be created during shooting – as a result, it comes without any lead-up or even making much sense. This emerges first with [PLOT SPOILERS] Melissa Sue Anderson sitting down her birthday party surrounded by the bodies of all the victims and then what seems like a twin of herself who is revealed to be the killer, before this is shown to be a lifelike face mask worn by her best friend (Tracy Bregman) who we thought we had seen killed earlier. Why the friend wears the mask and how all of this relates to the flashbacks to Melissa Sue’s birthday party disaster from five years earlier, which we get the impression the killings were conducted in revenge for, or for that matter to the death of her mother, her amnesia about what happened and the brain surgery scenes, is a mystery.

J. Lee Thompson’s other films of genre interest are:– the classic revenge psycho-thriller Cape Fear (1962), the occult film Eye of the Devil (1967), the Communist China spy thriller The Chairman/The Most Dangerous Man in the World (1969), Conquest of the Planet of the Apes (1972) and Battle for the Planet of the Apes (1973), The Reincarnation of Peter Proud (1975), the Western The White Buffalo (1977) with Charles Bronson hunting a mythic buffalo, 10 to Midnight (1983) with Charles Bronson vs a serial killer, and the utterly dire adventure film King Solomon’s Mines (1985). J. Lee Thompson also co-wrote the scripts for the very strange psycho-thriller East of Piccadilly (1940).