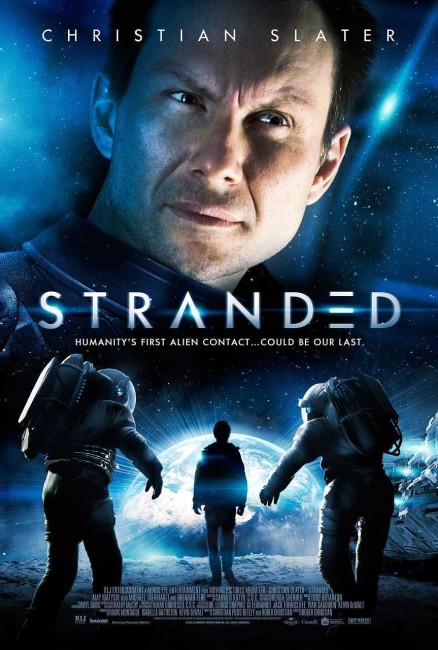 The small four-person mining base at Moonbase Ark is struck by a meteor shower, causing communications with Earth to go down. In trying to affect repairs, the crew pick up several of the rocks from the meteor. In the laboratory, these are split open and reveal spores growing inside, The spores start to spread once exposed to light. Ava is infected after cutting her finger and in no time becomes pregnant. She is placed in quarantine by commander Gerard Brockman. There she gives birth to an alien entity that escapes out into the corridors of the station. However, Gerard and the others refuse to believe this and put it down to hallucinations caused by the spores. As others in the crew are infected, they cannot be sure whether the existence of a creature is real or imagined.

Stranded comes from Roger Christian. Christian began as a set dresser, graduating to art director with such notable credits as Star Wars (1977), Alien (1979) and Monty Python’s The Life of Brian (1979). Christian made his directorial debut with the amazing, largely unseen psychic powers film The Sender (1982) and subsequently continued to dabble in genre material with the planetary adventure Starship/Lorca and the Outlaws (1984) and Nostradamus (1994), a biopic of the supposed clairvoyant, in between several thrillers. The film that Roger Christian will probably almost always be associated with though is the notorious turkey of Battlefield Earth: A Saga of the Year 3000 (2000), a film so widely ridiculed that it almost entirely torpedoed his career. It took thirteen years until Christian returned to genre material with Stranded here and the long delayed Uwe Boll-produced Egyptian adventure film Prisoners of the Sun (2013).

I have always held out hope for Roger Christian as an unsung talent on the basis of The Sender. Alas, Stranded is a desultory Alien knockoff – an irony given that Christian acted as art director on Alien and is now stuck making copies of it. Although given the alien pregnancy nature of the plot, what we have feels more like a copy of the Alien ripoff Inseminoid (1981). Or perhaps the team were thinking of the similar scenes in the recent Prometheus (2012).

The film makes a beeline for the cheesy elements of the genre – Amy Matysio is alien impregnated in next-to-no time and the show quickly descends to creatures and mutations pursuing crewmembers around darkened corridors. Even then the film has to throw in pointless dream sequences with Amy Matysio gorily giving birth to spice the action up.

What Stranded tries to add over Alien is an element of ambiguity where we cannot be sure whether there really is an alien creature or a pregnancy or whether this is paranoia created by the spores. This is an interesting idea that was first conducted in the very similar Alien Cargo (1999). Here though, the idea is so clumsily handled that we have no idea what is going for much of the latter half of the film.

At one point, we have Christian Slater trying to insist on quarantine procedures for the spores and then rather absurdly turning around and ignoring Amy Matysio’s infection and refusing to do anything that would in any way test to prove what the people are claiming. Despite the fact that she gets pregnant and gives birth to an entire creature, the rest of the people seem more interested in the fact that she has a cut on her finger.

Stranded gives the impression of having been cheaply produced. Unlike most modern science-fiction films, Roger Christian has chosen to rely not on CGI but on more traditional model effects. Alas, these are not particularly good and there are some unconvincing shots of the meteor shower striking the moon’s surface and of the moonbase. The film has also made no effort to replicate the Moon’s lower gravity and so the crew walk about as though they are simply on a terrestrial set.