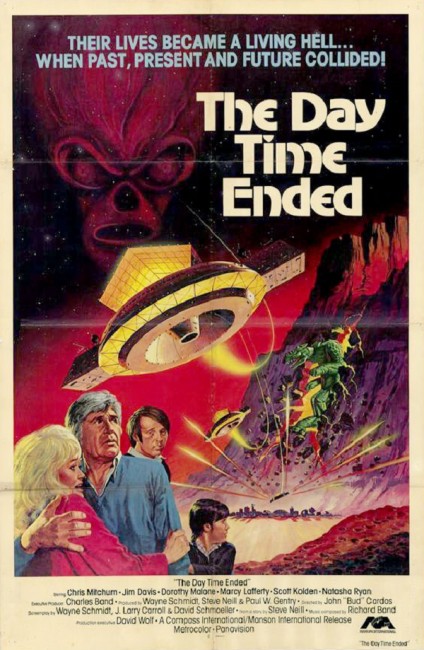 Grant brings his wife Ana, his daughter Beth, her husband Richard and their two children Steve and Jenny to the new house he has built in the Mojave Desert. At the same time, Earth is in the pathway of radiation from a trinary supernova. Soon after they arrive, young Jenny finds a glowing green pyramid in the corral, which causes her pony to vanish and then reappear. The pyramid shrinks to pocket size and, as she plays with it, she finds that it will materialise things and even anticipate her wishes. The house is buzzed by UFOs and invaded by a threatening probe, while giant creatures materialise outside. Next, a vortex transports the entire house to another planet.

This was a modest B-budget film that came out in the early 1980s, attempting to exploit the interest in UFO themes that had been created by Steven Spielberg’s Close Encounters of the Third Kind (1977). It was one of the earlier productions of Charles Band, who was to become a major name in the 1980s and 90s as the leading force behind Empire and Full Moon Productions and the producers of numerous B-budget horror and sf films. It was directed by John ‘Bud’ Cardos, a minor B-budget genre director of the era who also made the fine Kingdom of the Spiders (1977), as well as the likes of The Dark (1979), Mutant/Night Shadows (1984) and Outlaw of Gor (1989).

The whole of The Day Time Ended is like an extended version of the scenes in Melinda Dillon’s house in Close Encounters where the UFOs cause things to come to life. You could almost call it a UFO haunted house story. It opens particularly well. Young Natasha Ryan finds a glowing green pyramid in the corral, which wishes back her vanished pony and then subsequently does things like turn on taps for her and causes mini-aliens to appear in the house. There is the rather appealing scene where the car starts playing up and Ryan says “Okay, car, I want you to stop fooling around, you’re scaring my mommy” – and to everybody’s surprise it does.

Cardos manages to generate a reasonable atmosphere of mysteriousness – there is the supremely eerie moment where Jim Davis shoots at the UFO and it simply freezes the bullet’s trail in mid-air. The film clearly lack the budget of Close Encounters but does compensate adequately. The special effects are quite decent for the film’s clear B budget, with some nice planetary mattes, animation and decent UFO models.

If that were all there were to the film, The Day Time Ended would be a fair-to-modest effort. However, it falls apart in the second half where the dopey-looking stop-motion animated creatures almost entirely kill it. These come from special effects man David Allen, a regular contributor to and sometimes director of Band’s films, and are lumpen, awkward and thoroughly unconvincing. They are never seen in the same shots as people and convince as being nothing other than cheap-looking, amateur movie-level stop-motion effects. After these creatures appear, the film abruptly wraps it up with a mysterious dust storm and a time warp, ending with the family reunited on an alien planet heading towards a shining city of light.

Jim Danforth’s matte of the city is certainly the best special effect in the film. However, as an ending goes, this is a flopperoo. Aside from the fact that we have no idea where they are, it feels like a film that had one fine first act but lacked anything else and so merely wrapped it up on a banal 2001: A Space Odyssey (1968)-esque arrival at a transcendent place of galactic communion because it had no idea where else to go. There is no explanation for the pyramid, the aliens or the agency behind them, or why some of the aliens appear at be at war with others. Indeed, it is really a film without any drama – the family’s only role throughout has been a reactive one to the phenomena happening around them – they never do anything and so when the arrival at the end comes, it feels meaningless.