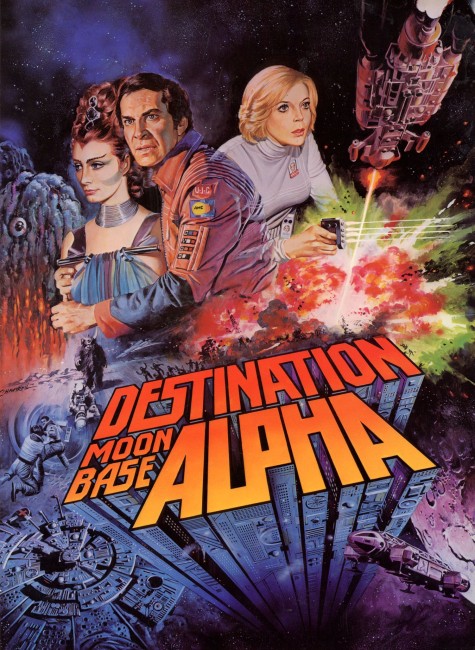 It is the year 2100. The accidental detonation of a nuclear waste dump has sent the Moon out of Earth orbit into deep space, along with the personnel aboard Moonbase Alpha. Moonbase Alpha’s commander John Koenig suddenly goes crazy at the controls of an Eagle ship and crashes near the nuclear waste dumps. As he is recovering, Moonbase Alpha is contacted by a faster-than-light Superswift ship that has come from Earth to rescue them and contains their friends, family and lovers. However, when Koenig recovers, he can only see one-eyed, glowing tentacular aliens where the human visitors are meant to be. It is thought that he is suffering brain damage as a result of the accident but Koenig realises that the brain machine placed on him in sickbay has inoculated his mind from the illusion created by the aliens. He persuades a handful of others and they fight to stop the aliens as they make plans to detonate the waste dumps to gain more of the nuclear power that they need to live on.

Gerry Anderson’s Space: 1999 (1975-7) is usually a series that is scathingly dismissed by science-fiction fans. And with due regard – it has an indifference to science that verges on the laughable – in particular, the premise of a nuclear explosion knocking the Moon out of orbit at super-light speeds, although somehow at enough of a velocity for it to be drawn into the orbit of a new planet every week. On the other hand, good science is never something that necessarily equates with good science-fiction and one is prepared to defend the merits of Space: 1999.

It was clearly intended as a rewrite of Star Trek (1966-9), cast in the vein of the cosmic mind-stretching galactic journeys that became the in-thing after 2001: A Space Odyssey (1968). It had – and still does have – some of the best special effects, best designed sets and best costumes of any science-fiction tv series of the era. It was unfortunately severely lacking in the human element, being miscast with the wooden Martin Landau and his then wife, the entirely blank Barbara Bain. How Landau managed to emerge as a respectable character actor in the 1980s, appearing in Woody Allen films like Crimes and Misdemeanours (1990), not to mention receiving an Oscar nomination for Francis Ford Coppola’s Tucker: The Man and His Dream (1989) and a win for his portrayal of Bela Lugosi in Ed Wood (1994), is a remarkable testament to the ability to reinvent oneself.

Contrary to popular opinion, I think that Space: 1999 had some moments that were great science fiction, at least in its first season. There were episodes like Collision Course, with Landau’s Commander Koenig forced to accept an alien matriarch’s requirement that he act on faith and believe that her planet is not going to collide with Alpha; Mission of the Darians with a guest-starring Joan Collins, which was the first screen treatment of the generation ship premise; and Black Sun, which contained a 2001-styled mind-expanding journey inside a black hole. In the first season, there is a fragile sense of a frail humanity trying to struggle to survive up against a vast and inexplicable universe.

The second season is much more disappointing with the first season’s best actor Barry Morse being dumped in favour of good-looking leads in the form of Tony Anholt’s deputy commander and the perkily sexy Catherine Schell’s exotic shape-changer, and the series somehow losing the more conceptually interesting cosmic vision that it previously held.

Destination Moonbase-Alpha was an attempt in the immediate post-Star Wars (1977) science-fiction boom to repackage Space: 1999 as a cinematically released film, in much the same way as the success that the tv series Battlestar Galactica (1978-9) had had in cinematically releasing its pilot episode as Battlestar Galactica (1978). Destination Moonbase-Alpha was not widely seen, although it did result in a number of other episodes from this and several other Gerry Anderson puppet series being repackaged as tv movies. These other Space: 1999 tv movies were Alien Attack (1980), Cosmic Princess (1982) and Journey Through the Black Sun (1982).

Destination Moonbase-Alpha was edited from the second-season episode The Bringers of Wonder (1977). The Bringers of Wonder is a natural choice for release as a film in that it was the series’ only two-part episode. It is unfortunately also one of the less interesting episodes. In fact, it is no more than a one-hour episode padded out with snails-paced chases and contrived cliffhangers – all there is here could have been condensed to a single one-hour episode.

The tentacular one-eyed aliens, glowing from within, are nifty creations. However, the whole illusion/doubt theme of wondering whether Martin Landau is going mad or seeing things is obvious from the outset and unsubtly dealt with. There is some rather awful comic-relief padding with the vamping Diana Morris and a jealous Maya turning into various monsters.

As usual for Space: 1999, the science is atrocious. There is the laughable scene when it is realised that the aliens are drawing their power from the electricity produced by the human brain and so all the personnel in the Moonbase are knocked out. Now firstly, simply rendering people unconscious does not switch off the electricity in their brain – the sleeping brain still uses electricity and to do that you would actually need to kill the people. Furthermore, it seems preposterous to talk about turning off the relatively minute output of the electricity in the human brain when the vastly greater output of the Moonbase’s instrumentation is kept on – not even the lights are turned off.

The reedited film version also screws the dates up – the credits of every episode of the series announced that the Moon was blasted out of Earth orbit on September 13, 1999, but here we are told that the year is 2100, one-hundred-and-one years later (even though the opening narration says it is still the 21st Century). Later this is justified somewhat by a vague reference to relativity: “We’ve been in space for months – on Earth, that’s generations.”