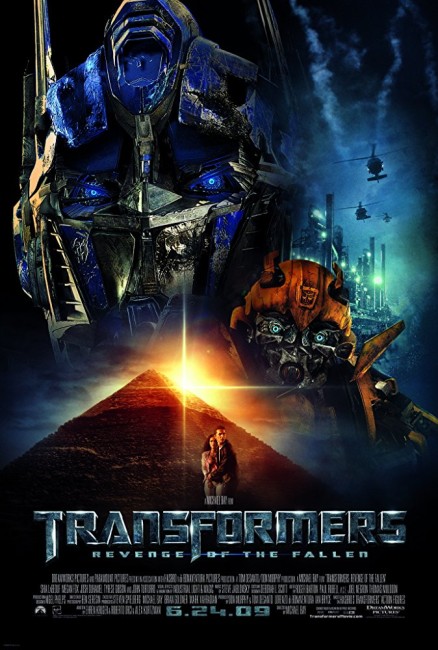 Sam Witwicky is about to leave home for college. Things are difficult between him and Mikaela who is unsure whether he will remain faithful to her while he is away. Sam is about to leave the fragment of the Allspark in Mikaela’s care when it comes to life in his hands. This causes Sam’s head to fill with symbols, driving him crazy as he settles into college. Decepticons then come after Sam, wanting to get the information in his head that leads to the whereabouts of the ancient Transformers known as The Fallen. Aided by various Autobots, Sam, Mikaela, Sam’s college roommate Leo and former security agent Simmons travel to Egypt in search of The Fallen as the Autobots, Decepticons and US armed forces gather in massed combat.

Michael Bay’s Transformers (2007), a live-action action film based on the classic animated tv series Transformers (1984-7), was a massive worldwide hit – indeed ended up being the No. 3 top-grossing film of 2007. Such success inevitably mandates a sequel, which came about with Transformers: Revenge of the Fallen here. Most of the cast and principal creative talents behind the first film have been reunited.

In my opinion, Michael Bay is one of the worst directors in the world. Michael Bay has been responsible for films such as Bad Boys (1995), The Rock (1996), Armageddon (1998), Pearl Harbor (2001), Bad Boys II (2003) and The Island (2005), all of which are premised around the provision of adrenalin pumping action, huge explosions, stalwart flag-waving heroism and … not a whole lot else. The constant emphasis on action and mass destruction at the expense of almost everything else in Bay’s films becomes wearying. Transformers however was a point where Michael Bay superseded himself, even though it was still the same Michael Bay film full of thunderous bombast. As becomes increasingly clearer by the time of Transformers: Revenge of the Fallen, the success of the first film would seem to be the novelty of seeing the Transformers played out in live-action more than anything that Michael Bay necessarily brought to it.

Unfortunately, by the time of Transformers: Revenge of the Fallen that novelty has dissipated and all that we are left with is a Michael Bay film as per usual. Michael Bay seems to give the impression of being a man who has never matured beyond adolescence. That need not necessarily be a problem – a large aspect of enjoying science-fiction requires one not to have given up on that part of oneself. In almost all regards, Transformers: Revenge of the Fallen feels like what might occur if you gave a group of 14 year-old boys unlimited resources to make the film they want – thus the film is all massive explosions, cool gadgetry, fast cars and women who seem to have no other function than to drape in the poses of sexual availability that only exist in men’s magazines. The amount of plot connecting this could have been sketched out on the back of a postcard.

As you watch, you begin to ask yourself has Michael Bay ever had a relationship with any woman other than a stripper or pole dancer? The women in Transformers: Revenge of the Fallen never seem to exist as anything more than glorified centrefolds. Megan Fox’s introduction involves her draped in a sexually provocative pose across a motorcycle – before we even hear a line of dialogue from her. The rest of the film reduces her to little more than running around the desert and pouting over whether Shia LaBeouf loves her or not. Isabel Lucas seems to do nothing other than strut along in slow motion with substantial areas of skin exposed while making sexually provocative glances in Shia LaBeouf’s direction. The depiction of student life feels like the sort of fantasy that comes from watching too many 1980s frat rat comedies – a surfeit of hot looking chicks giving inviting glances to the guys, techno geeks with their rooms wired up and lowbrow humour about Sam’s mother (Julie White) getting stoned, or involving the humiliation of pompous authority figures like Rainn Wilson’s professor and the officious national security adviser (John Benjamin Hickey).

This in itself would merely be immature but Michael Bay has compounded this with an outlook on the world that verges on the intolerant. As with the first film, people of ethnic persuasion are seen in terms of bad comic caricatures. Did Bay really need to make the self-important officer at the Egyptian border crossing also a dwarf, which can only mean that an otherwise passable characterisation emerges as a comic caricature? The film writes in a duo of comic relief Autobots that are constantly squabbling and fighting with each other, which is grating enough, but did the film really need to give them comic gangsta accents as well?

Everywhere else the film seems to fall over itself to glorify the military in an heroic light – indeed the end credits offer “Thanks to the men and women of the Armed Forces,” and credits the cooperation of more US military personnel than are probably in service in current real world Middle Eastern combat operations. The film’s human characterisations seems to operate on extremely simple-minded prejudices and patriotic caricatures – US military are decent, honest good guys and policemen of the world; ethnic individuals are comically stupid; women are surplus chattel whose only purpose is as sexual objects. The Transformers, ie. vast machines of mass destruction, can be either good or bad, although notedly the ones on the side of good (as opposed to the ones that need to be rooted out and destroyed) also happen to submit to the authority of the US military.

The sole thing that Transformers: Revenge of the Fallen has going for it are the Transformer effects scenes. These are even better than the first film and are the only reason to watch. These are stupendous in the sheer artistry that Industrial Light and Magic and co put on:- a sequence where the Autobots pursue a massive mono-wheeled Decepticon through a city; a cute sequence where the shard of Allspark causes the appliances in the Witwicky kitchen to turn into mini-Transformers, before naturally destroying the entire house; an amazing sequence with the various Transformers in hand-to-hand combat in an open field, slicing one another up with swords; a set-piece with an aircraft carrier being impacted and sunken by falling meteorites; and the lengthy battle around the Pyramids between the various factions, including a Transformer that is capable of crushing other smaller Transformers together to make one giant unit that sucks every other machine around into its whirling mass.

However, as the Egyptian sequence drags on for some 45 minutes of mass explosions, big machines body slamming one another and slow motion action, Transformers: Revenge of the Fallen eventually reaches a point where it becomes numbing noise and chaos that washes over you without any effect. Transformers was a fluke on Michael Bay’s part but with Transformers: Revenge of the Fallen he has tried to make everything bigger and bigger until it eventually reads a point of overload where one no longer cares. Half the sequences in the film – the ones with the Witwicky kitchen being taken over, the destruction of the aircraft carrier, the opening sequence – serve no point in terms of carrying the plot along, they exist solely as self-contained sequences. The film comes with a 2½ hour running time, although most of the actual plot that transpires could be condensed to take place in 30 minutes; the rest is overinflated noise, action and special effects.

In between the explosions and special effects, the human cast rarely get a look in, which may well have been a good thing. Shia LaBeouf stood out from the mechanised mass destruction in the first film but when it comes to the scenes here with him manically spouting the formulas in his head he gives an exceedingly silly performance. Thanks to the first film, Megan Fox went from a name that was known probably only to her agent and family to being voted the Sexiest Woman in the World and being top-lined for high-profile roles like Wonder Woman and Lara Croft. In that Megan Fox’s role in Transformers existed solely of a series of provocative sweat-dripping poses and almost nothing that could be considered animating a character, let alone acting, one is baffled about what the Megan Fox phenomenon consists of beyond her body. Certainly, she has done nothing else that has gained the slightest attention and has yet to demonstrate much that could be called acting ability. The one person who does stand out this time is John Turturro, an actor usually more used to indie productions, who rises to the occasion with fine comic effect, even if in the end he gets defeated by the constant heroic posturing he is required to do.

Michael Bay and Shia LaBoeuf but not Megan Fox returned with Transformers: Dark of the Moon (2011) and Bay and Michael Bay went on with a completely new cast to make Transformers: Age of Extinction (2014) and Transformers: The Last Knight (2017). Bumblebee (2018) was a spinoff where Michael Bay steps back to a producer position.

(Nominee for Best Special Effects at this site’s Best of 2009 Awards).