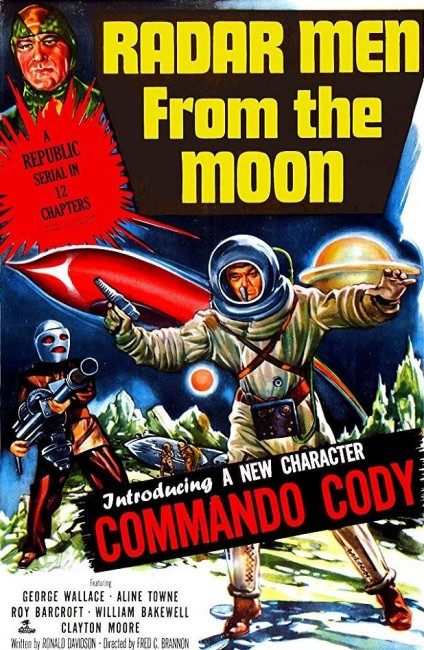 aka Retik the Moon Menace

Saboteurs are using atomic rays to destroy tactical targets in the US. The government agent Henderson approaches Commando Cody and his team of scientists to ask help in dealing with this threat. Using his flying rocket backpack, Commando Cody takes on Krog, an agent who has come to Earth to prepare the way for an invasion by Retik, the ruler of The Moon. Commando Cody and his team then travel to The Moon by rocketship to confront Retik. Meanwhile, back on Earth, Retik orders Krog to finance the coming invasion by using two criminal henchmen to conduct a series of robberies.

Radar Men from the Moon was a serial – films that were aired in theatres in chapters of twelve or fifteen episodes, one screening each week, always ending on a suspenseful cliffhanger to bring audiences back the following week. By 1952, the serial, which had first appeared in 1913 and had hit its peak during the 1930s and 40s, was well on the way towards its demise. Indeed, the last ever serial Blazing the Overland Trail (1956) was made only a few years after Radar Men from the Moon. By that point, the appeal of the serial had been supplanted by the new medium of television.

Republic Pictures had cornered a substantial part of the serial the market since the 1940s, making a series of impoverished Western, G-Men, science-fiction and superhero films. Earlier serials of the 1930s had been colourful science-fiction adventures venturing into other worlds with the likes of The Phantom Empire (1935), Flash Gordon (1936) and sequels, Undersea Kingdom (1936) and Buck Rogers (1939) but in the 1940s the science-fiction adventure serial had died away to be replaced by superheroes. This was possibly due to the US’s entry into World War II where the focus was less on wondering about the world beyond than it was on individual heroism. This was also due in good part to the fact that the first superhero Superman had appeared in comic-books only a few years earlier in 1938.

Republic’s Rocket Man was one of the few (possibly the only?) serial superheroes created for the screen, rather than beginning life on the comic-book page. Republic created the rocket pack suit and hooded mask and first used it in King of the Rocket Men (1949) where the scientist hero was named Jeff King and played by Tristram Coffin. The suit was reused in Radar Men from the Moon where the hero became known as Commando Cody and was played by George Wallace, then in Zombies of the Stratosphere (1952) where the hero was renamed Larry Martin and played by Judd Holdren. Holdren also donned the suit to play Commando Cody in Commando Cody, Sky Marshal of the Universe (1955) where footage from all the Rocket Man films and various other serials was reused to make a twelve-episode tv series. To further add to confusion, footage from other serials was frequently recycled – Radar Men from the Moon, for instance, cannibalises footage from another alien invader serial The Purple Monster Strikes (1945). The rocket man was later affectionately recreated on the big screen in Rocketeer (1991), which probably had a budget ten times bigger than all of the serials put together.

Radar Men from the Moon comes in twelve chapters. It interestingly prefigures two of the main preoccupations of 1950s science-fiction cinema – alien invaders and the threat of the atomic bomb – although, Radar Men in its conceptually impoverished way only feebly grasps at what either of these genres would evolve into. The Lunar invaders employ what are said to be atomic bombs, although what we see of these in action are just standard explosions, no mushroom clouds or mass devastation, and it is clear that the filmmakers have merely coined the word ‘atomic’ as a trendy new buzzword that was on the public tongue.

Similarly, when it comes to the alien invader aspect, Radar Men fails to approximate any of the otherworldly threat that the great 1950s alien invader cycle that came along in the next few years did. The aliens have a laughably prosaic dullness – most of their dirty work is conducted by two criminal henchmen (one of whom is played by Clayton Moore of tv’s The Lone Ranger (1949-57) fame) and their alien invasion plan is financed by mundane robbery and kidnapping schemes. One of the perpetual failings of the serials was to ever imagine anything adequately superheroic or otherworldly – none of the superhero serials, for instance, ever had any of the super-villains that their comic-book counterparts faced and superheroes rarely ever flexed their superpowers – and the aliens here look like no more than the standard hoods in a G-Man drama.

To its credit, Radar Men from the Moon manages a passable trip to The Moon. We get to see a rocketship – albeit one that has been recycled from Flight to Mars (1951) – a model of a Lunar city and a reasonable sequence where Commando Cody and cohorts are pursued by a Lunar tank. This latter sequence is moderately exciting because it is one of the few times that the serial-makers have gone out to build a vehicle and create a different type of action sequence. That said, The Moon’s surface is still the same standard Bronson Canyon and Griffith Park locations that were used to represent alien worlds in just about every serial. Some lip service is paid to the need for spacesuits on The Moon, although Commando Cody can apparently still fly through the air in his rocket backpack there.

Certainly, veteran serial director Fred C. Brannon has a flair for action sequences. We get some amazingly vigorous fistfights that end up wrecking entire laboratories and cafes, while the car chases come with some alarming scenes where we see the stuntmen diving out the doors of moving vehicles and rolling over and over down hillsides (all in the same shot). None of the cliffhangers throughout are particularly remarkable.

However, what kills Radar Men from the Moon is its thorough conceptual impoverishment, its failure to imagine an alien invasion as anything beyond being a glorified crime drama. There is also all sorts of quaint sexism that is funny to see today: Don Walters to Aline Towne – “I still don’t think this [the expedition to The Moon] is a trip for a woman,” to which she replies “You’ll be glad to have someone to cook your meals.”