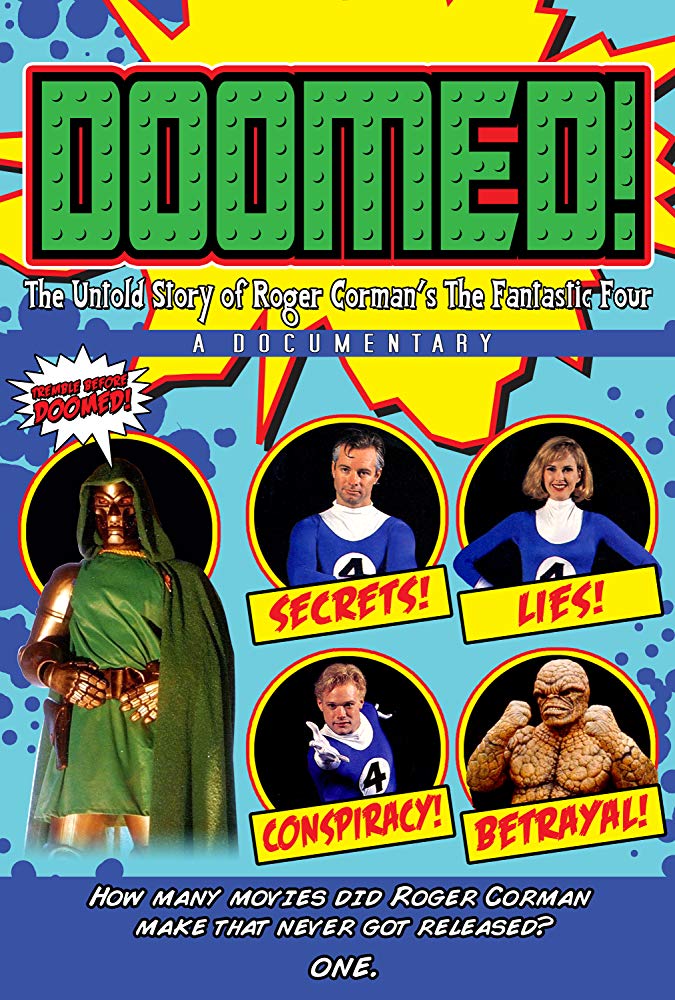 The Fantastic Four (1994) is a film that exists in legend. It was to have been a live-action version of the Marvel comic-book. The property was produced by Roger Corman, the producer-director known for hundreds of low-budget films. However, after completion, the film was abruptly withdrawn from release. This caused The Fantastic Four to become the stuff of legend. For years after, rumours circulated about what happened to the film, the most common being that co-production partner Germany’s Constantin Film had made it as an ashcan production – a film made to secure an about-to-expire copyright that was never intended to be released. Having secured the copyright, Constantin then went off to produce the subsequent big-budget films Fantastic Four (2005), Fantastic Four: Rise of the Silver Surfer (2007) and Fantastic Four (2015). In the midst of this, bootlegs copies of the 1994 film began to appear – the film is widely available on bit torrent and at YouTube. It has gained a reputation as being of legendarily bad proportions, although a viewing of it reveals it to certainly be more watchable than reputation has it.

Doomed: The Untold Story of Roger Corman’s The Fantastic Four is a documentary about the saga. It joins a small fad for documentaries made about troubled and cancelled productions that we have seen in recent years, many of them funded (like Doomed is) via fan support on crowdfunding sites. The trend was begun with Lost in La Mancha (2002) about the failure of Terry Gilliam’s The Man Who Killed Don Quixote project. In recent years, we have seen the likes of Despite the Gods (2012) about the problems behind Jennifer Lynch’s Hisss (2010); Jodorowsky’s Dune (2013) about the failure of Alejandro Jodorowsky’s adaptation of Dune (1965); Lost Soul: The Doomed Journey of Richard Stanley’s Island of Dr. Moreau (2014); and The Death of “Superman Lives”: What Happened? (2015) about the aborted Tim Burton-Nicolas Cage Superman film.

Doomed: The Untold Story of Roger Corman’s The Fantastic Four comes from Marty Langford who is a professor of New Media Studies at the American International College in Massachusetts in his day job. For the documentary, Langford has obtained interviews with all of the principal cast members (excepting John Trigger who played The Jeweler and died in 2010), as well as Roger Corman, director Oley Sassone and several of the behind the scenes personnel. Notable absences are the two screenwriters Craig J. Nevius and Kevin Rock, as well as Avi Arad, who the on-screen credits note refused to respond to any of the requests for an interview.

As the film charts, Constantin Film held the copyrights to The Fantastic Four, which were due to elapse unless a film went into production by a certain date. Constantin producer Bernd Eichinger approached various studios asking them to make the film. Most fascinatingly, the first of these was Troma Films where Lloyd Kaufman recounts that he declined because Stan Lee was a personal friend and seeing no potential in making the film. (The idea of a Troma version of The Fantastic Four boggles the mind). Next on the list was Roger Corman who agreed to make the film for a one million dollar budget. As those interviewed recount, this resulted in a cut-price version of the comic-book using cheap costumes, recycled sets and crude physical effects.

What does come through from almost every single person interviewed is how they had a passion for the project and were earnestly determined to make it succeed despite the limitations. Oley Sassone tells how he conducted post-production guerrilla style when no money was forthcoming. Michael Bailey Smith tells how he placed some $12,000 of his own money into financing publicity when Roger Corman wouldn’t and how he and the other cast members toured the convention circuit promoting the film to an eager fan reception. All report how they were gutted to learn of the film’s withdrawal.

The exact reasons for the film’s withdrawal are up for debate. Several people voice competing theories and the docmentary never alights on one in particular. There is the claim that Constantin made the film never intending to release it, while leading everybody involved to think they were. This is borne out by Oley Sassone’s statement that interest dried up in post-production, which would seem to indicate that nobody cared about the film once it was completed. Other fingers are pointed at 20th Century Fox who were wanting the Fantastic Four as a big-budget film for Chris Columbus and, it is speculated, sought to withdraw the film as competition. The most likely suspect emerges in Avi Arad who it is believed withdrew the film so as to consolidate his vision of creating a series of big-budget Marvel superhero films, something that eventually became the Marvel Cinematic Universe. With Bernd Eichinger having died in 2011, Arad not replying and no other sources close to the know being present, it is guesswork as to precisely what happened.

Oley Sassone and all of the cast prove wry and surprisingly forthcoming about their hopes and disappointments. The ones that come out of the film the worst are Avi Arad (see above) and Stan Lee. Stan Lee is reported to have made several set visits and was very enthusiastic about what they were doing according to the cast but subsequently went and publicly condemned the film, effectively stabbing them in the back. Roger Corman is seen as supportive, although is also accused of having taken the money offered to withdraw the film and a polite silence drawn over his complicity. Bernd Eichinger is variously condemned but also comes across as regretful of what happened, leading one to suspect that it may not all have been entirely down to him – you do get the impression that he genuinely intended to release the film.

This is perhaps the only film you will ever see where the makers of the film praise the bootlegging of copies and their distribution to the internet. This is seen as allowing the film to finally be seen and having boosted its reputation. All are hopeful that the film will one day obtain an official release.