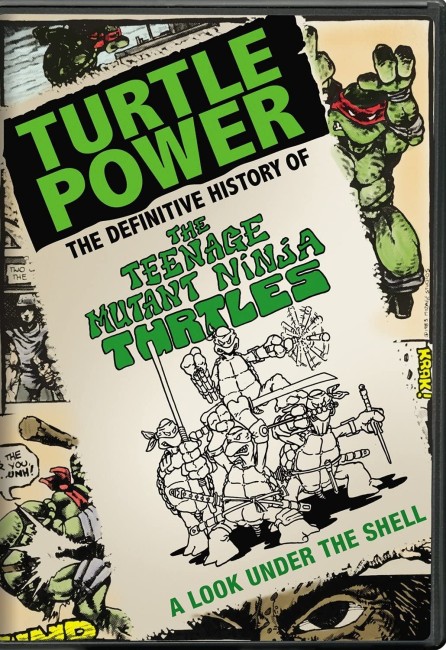 Turtle Power is a documentary about the Teenage Mutant Ninja Turtles phenomenon. It charts the Turtles’ rise from independent comic-book to marketing blitz, a hit animated series and then onto movie screens.

The documentary begins where the phenomenon did – with creators Peter Laird and Kevin Eastman. The two were friends living in New Hampshire and both were comic-book fans. In 1984, they put the first black-and-white issue of the Teenage Mutant Ninja Turtles comic-book together for a run of 2000 copies, which proceeded to sell out. Other issues quickly followed with the two recounting that they thought they were having success being able to earn $2000 per issue. The documentary details their creating a studio, which they called Mirage because it initially only existed in their own homes. They tell how various characters were based on their own differing personalities or girlfriends at the time.

Where the phenomenon took off was when they began to sell merchandising rights to the Turtles. This led to the production of a line of toys beginning in 1987, which quickly sold out on shelves. The documentary interviews the toy makers and discusses difficulties of creating characters out of figures that were all identical – in the comic-book, the only difference between the Turtles was the weapon each character wielded. The toy designers tell how they dealt with this by emphasising the colours of the masks and placing an initial on their belt to differentiate each turtle – or how they tried to market accessories with sewer and turtle shell themes.

The toy merchandising led to the animated tv series Teenage Mutant Ninja Turtles (1987-96), which is where the Turtles phenomenon went stellar. There are interviews with producer Fred Wolf who traces the show’s development (Wolf is the one who introduced the bizarre pizza flavours) and writer David Wise (who introduced the phrase “cowabunga”). All of the Turtle voice actors, including those voicing April, Shredder and Splinter are interviewed, and discuss in often amusing ways how they interpreted the characters. The documentary-makers even interview some of the performers from the 1990 live musical tour.

There is also discussion of the live-action films. This is almost completely centred around the first film Teenage Mutant Ninja Turtles (1990). Director Steve Barron, star Judith Hoag, Jim Henson’s son Brian and various of the suit performers are interviewed. There is discussion of the moderate seven million budget raised and the decision to co-produce with a Hong Kong company because of their martial arts expertise. We see some footage of test reels shot for the suits and some talk of the technical difficulties the suits presented. There is some discussion of Steve Barron’s innovative directorial decisions – the choice to shoot 1/24 of a frame less per second to speed up action and treat the suits as though they were characters including going in for closeups.

Director Randall Lobb has done on to make a number of other pop culture documentaries with the likes of Power of Grayskull: The Definitive History of He-Man and the Masters of the Universe (2017), The Crystal Calls – Making the Dark Crystal: Age of Resistance (2019), A Riddle of Steel: The Definitive History of Conan the Barbarian (2019) and Baywatch: The Documentary (2020).