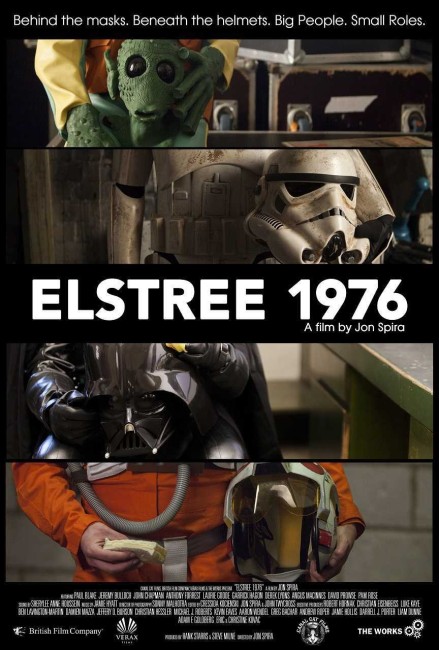 Elstree 1976 may be the more unique Making Of documentaries ever made. While most Making Of documentaries are either promotional puff pieces or else more interestingly dissect a behind the scenes disaster (while more recently, we have had a spate of these that tell the stories of unmade films), this is a documentary that takes a classic film, Star Wars (1977), and concerns not the making of but the story of the least important people on the set – the bit players and extras.

These range from well-known names like Dave Prowse, who was Darth Vader, and Jeremy Bulloch who was Boba Fett, to the more anonymous people way down the credits list such as those playing Greedo and the X-Wing pilots to the completely anonymous, the uncredited extras playing stormtroopers or the people lined up at the rebel awards ceremony.

Elstree 1976 covers various of these people. With the exception of Prowse and Bulloch, who you feel don’t belong in the film because they gained considerable mainstream recognition for their roles, none of the names interviewed have gone on to do anything else of notability in the acting field. What one of the interviewees does point out is that the Star Wars gig mounted to only a few days work out of their entire lives.

As such, the documentary pads these crucial few days out with some talk about who they were before they attained the part, while the entire second half is given over to discussion of the fandom and how it has impacted their lives, as well as some discussion about what they have been doing since. The reality the film brings out is that most of them, who are now in their sixties, have never gone on to do anything other than lead ordinary lives but are glad of having been tiny cogs in the machinery of something that was a massive success.

Certainly, the various people come out with some fascinating pieces of trivia. Laurie Goode tells the amusing story of being the Stormtrooper who banged his head on the door (because he couldn’t see through the helmet), which was left in the finished film, and has had to fight other extras who claim to be that person. Anthony Forrest tells of turning up on the set and asking someone to making him a cup of coffee, which they did – before he found out that it was George Lucas he was asking.

David Prowse alludes to his well-known battles with Lucasfilm, which have resulted in his being barred from attending any of their official events. As fan mill rumour goes, these seem based on their belief that he was leaking script details to the press, which Prowse has vigorously denied. Here Prowse admits to be being baffled as to the reasons, merely shrugging and saying “You’d have to ask George Lucas that.”

All of them speak about how the fandom has had a transformative effect on their lives – Derek Lyons even about how it helped him overcome depression. Almost all speak of a love of meeting with fans and signing often for hours at a time. Perhaps one of the more intriguing aspects is about how the fandom seems to exist on a hierarchy where those who get a screen credit legitimately feel that they are entitled to be there whereas those who were no more than unnamed extras in crowd scenes are regarded as being on the bottom rung of the ladder, in some cases the validity of whether they have a right to be there being questioned altogether.

One of the more interesting aspects brought out is how the most popular of these actors appear to be those who were behind masks, what one of the interviewees refers to as “actors in tin cans.” The favourite on the fan circuit was apparently the late Kenny Baker. Jeremy Bulloch, who proves a most gracious interviewee, offers his theories as to this, seeing that the fans have come to get a piece of memorabilia from the character as opposed to the actor inside the suit.