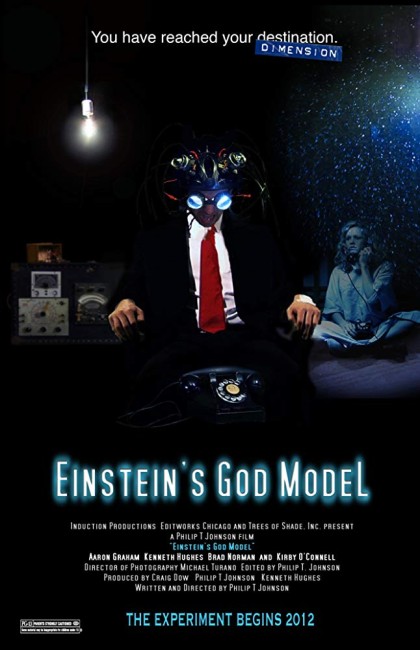 Brayden Taylor, a Chicago anaesthesiologist, is shattered when his girlfriend is hit and killed by a car in the street. As he tries to pull himself together in the aftermath, he learns from his colleagues about ketamine, which is reputed to allow people to see/contact the dead, and becomes fascinated. He is directed to physicist Carl Meiselhoff who has been conducting experiments with ketamine, only to find that Meiselhoff has died. Meiselhoff’s widow gives Brayden his equipment stored in the garage. This includes Thomas Edison’s Electrograph EM Field Receiver, which Edison claimed would be able to contact the dead. Brayden tries to activate the machine using himself as subject with agonising consequences. Brayden’s doing so allows former Meiselhoff pupil Dr Louis Mastenbrook to find him. Mastenbrook is certain that they can get the machine working properly, which will allow them to communicate and possibly even cross over between the membranes that separate universes. To do so requires recruiting Craig Leeham, one of Meiselhoff’s former experimental subjects who lost his eyes in an earlier attempt and now acts as a medium.

Einstein’s God Model was a directing/writing debut for Philip T. Johnson and a crew largely of unknowns operating out of Chicago.

From its opening credits, which pays tribute to famous physicists like Niels Bohr, Edward Witten and Nikola Tesla, to the incorporation of the actual idea for a ‘spirit phone’ that Thomas Edison built, you can definitely say that Einstein’s God Model is a very different work. It is certainly unlike the usual films that get covered on this site where scientific experiments do no more than create monsters or unleash chaos. If nothing else, Philip T. Johnson has done his reading on physics and happily incorporated some of the wilder speculations out there. Although for all its intriguing title, Einstein’s God Model doesn’t feature much – there is an intriguing scene where Kenneth Hughes sketches it out for Aaron Graham – but in actuality the film is more concerned with Edison’s spirit phone.

The unusualness of the film is never more than evident during the opening scene where an experimental subject (Brad Norman) is placed inside the device, surrounded by archaic machinery, including having an old-fashioned rotary dial phone placed in front of him, his eyes are covered in goggles and the device turned on – only for things to go wrong. The film then becomes more like a version of Flatliners (1990) albeit set in the world of theoretical physics. It makes great use out of archaic technology (even if you have major doubts that Thomas Edison, who actually built his spirit phone in 1920, managed to invent a set of modern stereo speakers, which appear to be part of the device).

The rest of the film is a wild conceptual ride – none the more so than the scenes with Brad Norman as a medium on a Christian radio station contacting the dead (a scene that depicts a medium at work unlike anything we have seen before). The film’s end scenes venturing into the afterlife and crossing the multiverse are never quite as conceptually wild as the film promises to be, are even a little confused in the end resolution, but you cannot fault the film for trying. The climactic crossing over comes with a visually dazzling series of scenes that seem to be opening up an Altered States (1980)-like transcendental journey on a budget.