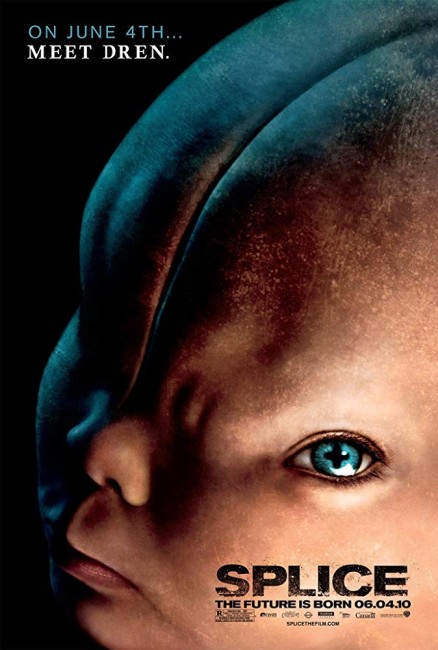 While also a couple, Clive and Elsa are bright genetic engineers employed by Newstead Pharmaceuticals to create a hybrid animal gene. They succeed in creating the gene but almost immediately the company wants to shut the project down and patent the enzyme while ignoring the vastly larger research implications. On impulse, Elsa decides to complete the experiment, mixing human DNA to create an embryo and then bringing it to term just to see what they have created. They agree to terminate it after that point. However, the embryo struggles inside the incubator and makes an escape. They discover they have created a creature, which they name Dren. They hide it in a storeroom where it grows rapidly, proving highly intelligent and capable of imitative behaviour. To protect Dren from others at the lab, they move her to the barn on Elsa’s late mother’s farm. However, as Dren grows into adulthood, her behaviour becomes more unpredictable and dangerous.

Splice is the fourth film from Canadian director Vincenzo Natali. Natali first appeared with Cube (1997), an astonishing conceptual science-fiction film that won wide acclaim. Natali subsequently went onto make Cypher (2002) and Nothing (2003), both also well worthwhile conceptual science-fiction films that sustained the promise shown in Cube. Subsequent to Splice, Natali went onto make ghost story Haunter (2013), the U is for Utopia segment of ABCs of Death 2 (2014) and the Stephen King adaptation In the Tall Grass (2019). Natali was for a long-time attached to the adaptation of the J.G. Ballard novel High-Rise (2015) and has been associated with a film revival of DC’s Swamp Thing and an adaptation of William Gibson’s Neuromancer (1984), as well as executive producing the Found Footage surveillance stalker film 388 Arletta Avenue (2011) and the dream horror Come True (2020).

Splice comes from a variety of Canadian and French productions companies, including Dark Castle Entertainment, the US company that has had a number of successes in recent years with horror films like House on Haunted Hill (1999), Thir13en Ghosts (2001), Gothika (2003) and House of Wax (2005). Guillermo Del Toro has also signed on as an executive producer.

Splice is a venture into the man-made monster theme. Vincenzo Natali says the starting point for him was the well-publicised photos of the mouse genetically engineered with a human ear growing out of its back. The North American press immediately looked for comparisons to other films and dredged up the likes of Jurassic Park (1993) and Species (1995). This is perhaps because there that not that many other genre films that deal with genetic engineering as a theme, at least as anything other than as a quick explain-all for a standard monster movie. To find something that approaches Splice in terms of its serious handling of themes and questions raised about ethics, you would have to go back further to some of the British tv mini-series treatments such as First Born (1988) and Chimera (1991).

Unlike most of these others, Vincenzo Natali makes a point to keep the science in the film believable (there are credited genetic engineering consultants on the end credits). This is something that takes Splice out of the monster movie and into the realms of a scientific discovery thriller. Not that monster movie themes are ultimately too far away from Natali’s intentions but it is nice to see the film being made with credible science, not to mention addressing issues in the modern bio-sciences – of corporate funding and control, of whether it is possible to copyright genetic material and the question of ethics in genetic research.

To such extent, the use of credible science disguises for a long time what is essentially a monster movie at heart. The introduction of the creature holds some of the most fascinating scenes in the film – there is an eeriness to the scenes where it first demonstrates its intelligence using the letters of a Scrabble set and scuttling about the lab as Adrien Brody and Sarah Polley try to determine what they have created.

Things become a little less interesting where the creature goes from something represented largely by CGI and animatronics to being played by French actress Delphine Chaneac where it is far more obvious that it is a human playing the part. Nevertheless, Chaneac conducts an intriguing series of gymnastics, animal-like expressions and behaviours, while the makeup and visual effects people outfit her with a striking array of barbed tails, sets of wings, three-fingered hands and cloven feet.

Adrien Brody and Sarah Polley are okay in their parts, although neither do anything that truly stretches their acting talents – they are largely generic roles and the conflicts that play out between them are not where the film’s drama rests.

Ultimately, I felt that Splice was Vincenzo Natali’s least interesting film to date. It may well have been that the Dark Castle name mandated that he have to play it out as a monster movie but I could not help but feel that when he started to do so, the film bought into too much of a cliched treatment. For all the scrupulousness of the science on display, Splice never treads far from being Frankenstein science where the story is a prognosticator of doom rather than a balanced examination of issues. The script raises a number of issues about genetic research and aims at but never finds anything original to say about them. The ending feels generic, almost as though Vincenzo Natali did not have much interest in it or that he was merely going down the creature/chase route because he and his writers couldn’t think of any other way to wrap up the story. If nothing else, these sections do at least provide the kinkiest sex scene of the year.