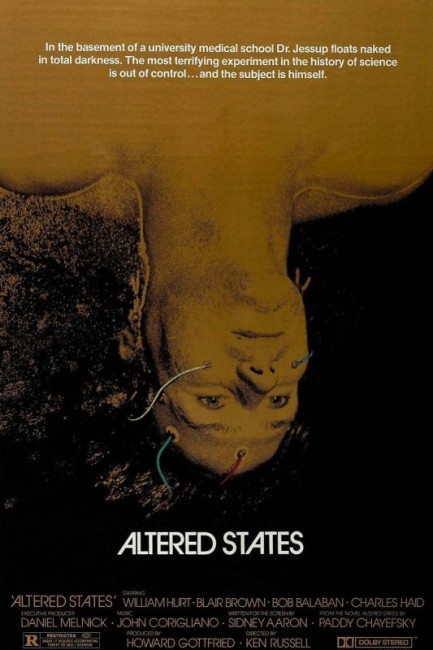 Psychologist Eddie Jessup is researching hallucinatory phenomena. Using a sensory deprivation tank, he experiments with a mushroom he finds in Mexico and experiences wild religious visions. However, repeated use causes Eddie to emerge from the tank having regressed to his primitive ancestry.

Director Ken Russell (1927-2011) emerged to acclaim in the early 1970s with films like Women in Love (1970) and The Music Lovers (1971). Gradually it became apparent that while Russell had been initially hailed as a new arthouse director, with scrupulously acceptable subjects like adaptations of D.H. Lawrence and his biographies of the famous classical composers and artists like Mahler (1974) and Savage Messiah (1976), underneath he was a total madman. Russell’s demented excesses had always been bubbling below the surface in films like but they started to emerge in works like  the sensational The Devils (1971), the madcap biography of Franz Listz, Lisztomania (1974) and The Who rock opera Tommy (1975). Altered States was surprisingly enough a respectable well-budgeted US studio production for Russell. (See below for Ken Russell’s other genre films).

In the 1960s, there was a spate of LSD/acid trip films that became a brief fad for a couple of years around 1967-8. Altered States is surely the first acid trip film made with a multi-million dollar budget. It is a completely mad film that emerges something like a drug-induced conceptual collision between and The Neanderthal Man (1953), The Mind Benders (1962) and The Trip (1967). At heart, Altered States is not much more than a reworking of hokey old 1950s man-regresses-to-caveman films like The Neanderthal Man and Monster on the Campus (1958) done up in modern existential-neurochemical drag and with wild doses of Carlos Castenada and Timothy Leary thrown in for the ride.

Altered States was actually written as a serious 1978 novel by Paddy Chayeksky, the Oscar-winning screenwriter responsible for the brilliant tv satire Network (1976) and other acclaimed works such as Marty (1955), The Americanization of Emily (1964) and Hospital (1971). The film version of Altered States was originally announced under director Arthur Hiller of Love Story (1970) and Nightwing (1979) fame but was inherited by Ken Russell.

However, the meeting between Ken Russell and Paddy Chayefsky appears to have been a none-too harmonious one with Chayefsky, in resentment over Russell’s handling of his material, removing his name taken from the script and substituting his own given name Sydney Aaron. Why is unclear? Chayefsky appears to have taken the film’s druggy cosmological head-trips seriously, whereas Ken Russell clearly does not. Exactly why Chayefsky, a brilliant satirist, took this silly, rather loopy drug fantasy seriously is a good question. All the scientific treatise that he piles on the script (and even more so in the book) does not disguise the fact that Altered States is a scientifically naive film – the notion of modern man physically transforming into his ancestor with the use of an hallucinogenic drug is patently absurd.

Unlike Paddy Chayefsky, Ken Russell revels in the absurdity of the idea, playing the scientific treatises like monomaniacal soliloquies on fast-forward, with characters talking at the same time or spouting them around mouthfuls of food or bottles of wine. Paddy Chayefsky’s attachment to the seriousness of the project is difficult to understand – Ken Russell only adds humour to a book that treated straight-faced would have been laughed off the screen. Nevertheless, some of Paddy Chayefsky’s characteristically barbed writing is still present in some of the wonderful one-liners – “The One Truth is a tangible entity and I’m going to find the fucker” – William Hurt’s statement of intent; “She’s crazy about him, he’s crazy” – character analysis; “I prefer the senseless pain we inflict on each other to the senseless pain we inflict on ourselves,” – a reconciliation.

Ken Russell runs rife through his previous Christian blasphemies and the psychedelic trips of Tommy. Altered States doesn’t so much come at one as assault with its frenetic pace and imagery – visions of a goat-head William Hurt flying through the stratosphere consumed by a flaming crucifixes; a beautiful sequence with naked bodies being eroded by sandstorms; damned souls diving en masse into flaming pits in solarized scenes taken from the silent version of Dante’s Inferno (1924) – all to immensely entertaining effect.

Ken Russell’s films far too often give into a campy silliness but Altered States, for all its patent nonsense as serious science, gains a transcendental cosmological grandeur that stretches the mind. This is a film that dares to grapple with ultimate meaning and no matter the straight-faced silliness of it all, it does have the same religiose magic that 2001: A Space Odyssey (1968) had. Many condemn Ken Russell for his pretentiousness and overt silliness here, but to my mind it is the film’s inspired advantage.

Ken Russell’s other films of genre interest are:– the spy film Billion Dollar Brain (1967); the historical witch persecution film The Devils (1971); Tommy (1975), the surreally demented adaptation of The Who’s LP; the psycho-sexual thriller Crimes of Passion (1984); Gothic (1986), centred around the events leading up to the inspiration for Mary Shelley’s writing Frankenstein (1818); the spoofily over-the-top adaptation of Bram Stoker’s The Lair of the White Worm (1988); Mindbender (1996), an hysterically bad biopic of the psychic Uri Geller; The Fall of the Louse of Usher (2002), Russell’s demented home movie take on Edgar Allan Poe; and an episode of the horror anthology Trapped Ashes (2006).