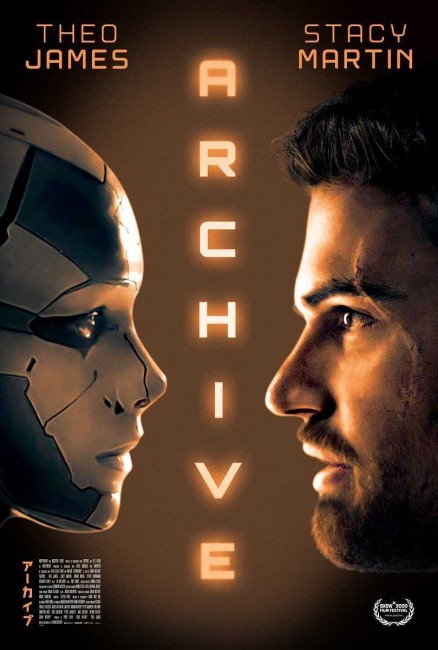 It is the near future. George Almore is an employee of Archive Systems Incorporated, working alone at a remote laboratory in Japan on a project to develop a prototype artificial intelligence. George’s wife Jules died in a car crash. George has her post-mortem consciousness archived in a commercial storage unit. Unknown to his employers, George has been attempting to bring Jules’ consciousness back to life in a robot body. His first two attempts at doing so have resulted in bulky robots that have only the minds of children, which he uses as assistants around the laboratory. He is now attempting to perfect the process of bringing Jules to life inside an android body. The 02 robot, the most developed of the consciousnesses, becomes unstable and erratic at fears of being replaced. At the same time, George is also warned by his superiors that industrial spies are watching and will try to break in and steal information.

Archive was a feature-length directorial debut for Gavin Rothery. Rothery had previously worked as a visual effects supervisor and graphic designer on several short films and videogames, his most notable credit being on Moon (2009). He had previously directed the 21-minute short film The Last Man (2014).

More so than the debate about Artificial Intelligence, Archive falls into the fascination with Mind Upload – the process of transferring a human mind into a digital form such as the internet or a machine body. This has appeared sporadically in films with the likes of Ghost in the Machine (1993), Lawnmower Man 2: Beyond Cyberspace (1996), Transcendence (2014) and Amelia 2.0 (2017), none of which were particularly good. The nearest that Archive comes to was probably the quite good The Machine (2013), which had a scientist trying to recreate a scanned mind in an android body at the same time as his superiors want to appropriate his research for military purposes.

Archive promptly becomes one of the better of these Mind Upload films. It has an intriguing set-up. Theo James (who also produces the film) is a scientist at a remote laboratory built by a picturesque waterfall in Japan (where you cannot help but think that rather than be remote it is likely to be a tourist destination). He has two bulky robot servants and seems to treat them as petulant children, which reminds you of something of Silent Running (1972). We also see that he is building an android body that so far only exists as a torso but ends up screaming in pain every time he tries to activate it.

Things become even more intriguing with the arrival of Toby Jones and Richard Glover as two technicians who are accompanied by armed and body-armoured security. They conduct an examination of the hardware where the consciousness of Theo James’s late wife (Stacy Martin) has been stored and it becomes apparent that he has been tampering with it, which comes with threats upon their part to revoke the service before he threatens to invoke ‘corporate sovereignty’ and they back off. This is in between an uncustomarily bitchy and hard-nosed Rhona Mitra as Theo’s boss and his meetings with a corporate security heavy (Peter Ferdinando) who gives him a briefcase with orders not to open it unless his life is under threat, Gavin Rothery seems to be in his element, taking a co-production designer credit and designing Theo James’s functionalist bunker lab. The setting is a soft Near Future that edges on being a Cyberpunk setting.

There is a good deal I liked about Archive from the interestingly different relationships with the robots – where it gradually becomes apparent throughout that these are his prototypic attempts to transfer the consciousness of Theo’s wife in a machine body. One of the best realised aspects comes during the middle of the film when Theo fully activates his wife’s consciousness inside the android body. The actual android awakening scenes are fairly by the book but what makes the film work is the images of the 02 robot feeling neglected and abandoned in the background or awakening to find its legs removed. The images of the lonely depressed robot looking out across the waterfall and walking into the lake are among some of the most heart-rendering you will see this year.

I would have been happy to give Archive 3½ stars but what made it less than a very good film for me was the Conceptual Reversal twist that comes right at the end. [PLOT SPOILERS]. After the build-up about Theo James hacking the post-mortem storage facility to download his late wife’s body into an android body we abruptly learn is that he is actually the one in post-mortem storage and that his wife and daughter are the ones coming to the Archive facility to communicate with him. This is an intensely frustrating twist. We have a story that initially engages us in Theo James’ struggle to create an android body and revive his wife’ consciousness while facing spies and corporate oversight’s attempts to shut him down. The end renders all of the drama the film has created an irrelevant red herring, the equivalent of the “It Was All a Dream/Virtual Reality Illusion/Drug Hallucination” twist. There is not any cleverness to it, no attempts to layer a puzzling anomaly that suddenly comes together to make sense – just an abrupt turning of everything on its head as though the filmmakers had no idea how to resolve their story.