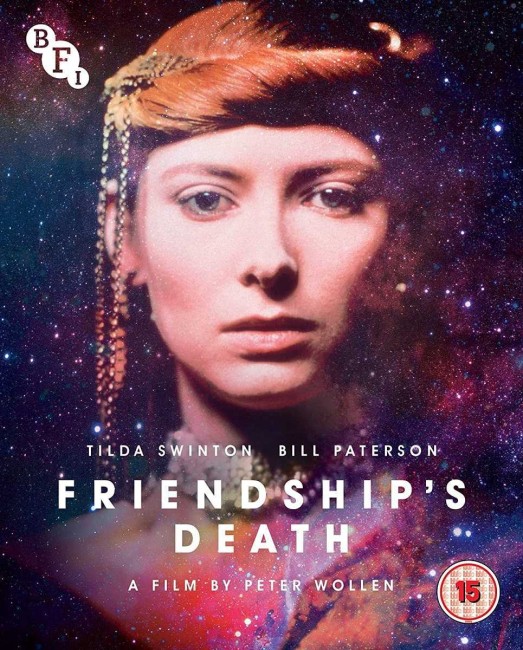 Amman, Jordan, during the Black September riots of 1970. Sullivan, a British journalist, comes to the aid of a woman known only as Friendship who is found wandering without papers following a bombing and grants her refuge in his hotel room. There she tells him she is an android, sent as a peace envoy from another planet. Originally designed to go to MIT, she ended up here after her craft encountered atmospheric disturbances. Sullivan is not sure whether to believe her story but finds her strange and quirky view of the world appealing.

Friendship’s Death is a peculiar, often haunting, little low budget film financed by the British Film Institute. It is very similar to the Brazilian Man Facing Southeast (1986), which came out around the same time – both films feature a man trying to decide whether an ambiguous but charismatic stranger’s claims to be from another planet are true or not.

Friendship’s Death is a strange film – for instance, most films with themes of terrorism take in the chaotic violence and the gut-wrenching effect on innocent victims that terrorism has, but this is the complete antithesis. Instead, the film is confined to a single hotel room and is essentially a dialogue between the two characters – it could for the most part be a play. (Clearly, the arts funding that the film has been made under was not enough to extend to any wider depiction of the scenario).

The script is thoughtful and oddly affecting, full of quaintly amusing little challenges to everyday assumptions – Tilda Swinton’s love of stubble, her observations on the absurdity of a football game. There are some charmingly tongue-in-cheek pleas, like when she argues that Bill Paterson’s typewriter is part of a subjugated slave race, or how the big toe led to the oppression of women, where the film is clearly not taking itself entirely seriously. Photographer Witold Stock shoots to capture Tilda Swinton’s pale porcelain beauty. Balanced out against the wryly, cynical Bill Paterson, she gives an appealing performance.

Tilda Swinton had her first starring role here and went onto find fame in a number of independent productions, before attaining mainstream success and being nominated for an Academy Award in the 00s. Director Peter Wollen is a documentary filmmaker, film critic, lecturer and essayist on the Middle East and spent some living in Amman where the film is set. Friendship’s Death has been his last film to date.