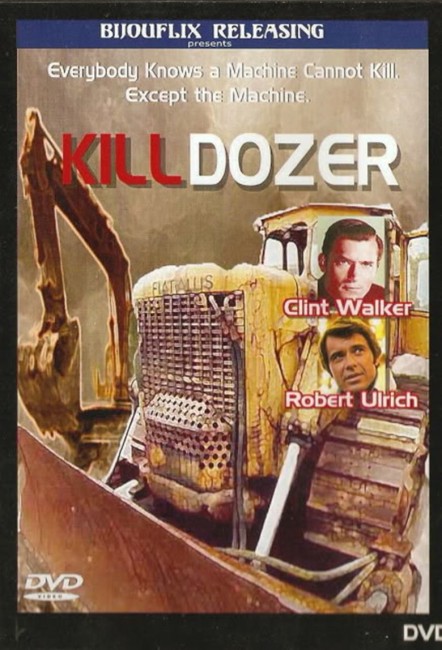 Five American men are working on a tiny island off the west coast of Africa to clean up the site before an oil company moves in. The bulldozer uncovers a rock that they do not realise is a fallen meteorite. As the dozer blade strikes it, the meteorite gives off a strange blue light. McCarthy, the man nearest the scene, falls ill and dies that night. Shortly after, the bulldozer comes to life and starts moving of its own accord. It becomes increasingly more malevolent, trashing the camp and then pursuing them across the island, intent on killing them.

Theodore Sturgeon (1918-85) is not a science-fiction writer who ever gained the widespread name that contemporaries of his such as Isaac Asimov, Arthur C. Clarke and Robert Heinlein did. Beginning with the pulp magazines in the 1930s, Sturgeon nevertheless maintained a prolific output, including some 200 short stories and ten novels. Sturgeon also dabbled in writing for television, coming aboard Star Trek (1966-9) at Gene Roddenberry’s behest to deliver two classic episodes Amok Time (1967) and Shore Leave (1968). Sturgeon also wrote scripts for other shows such as The Invaders (1967-8) and Land of the Lost (1974-7), while his stories have been adapted as episodes of anthology series such as Tales of Tomorrow (1951-3) and The Twilight Zone (1985-9).

Sturgeon originally published Killdozer (1944) in Astounding magazine where the origins of the alien are slightly different – there it is an alien being left over from a war between sentient machines and uncovered by Wartime excavations, whereas here it is simply a meteorite. He also co-wrote the script for this tv movie adaptation. Around the same time as this film, Marvel Comics also adapted the story in comic-book form in an issue of Worlds Unknown (1974). In the 1980s, the name Killdozer was appropriated by a Wisconsin band.

It is clear when it came to Killdozer that Universal were less enamoured with Theodore Sturgeon as a writer than they were simply seeking to emulate the success of the tv movie Duel (1971). Duel concerned a psychological battle between a man driving along the highway and a truck he manages to annoy that proceeds to play a series of murderous games with him. The driver of the truck is never seen, meaning that the film becomes an allegory about man vs machine. What made Duel such a classic was Steven Spielberg as director in his first film where he imbued the battle with a superbly drawn-out psychological tension and sense of paranoia.

Duel was such a success that it was released to cinemas in a slightly altered version. It is clear that Universal had the same intentions with Killdozer, although it failed to garner the same degree of acclaim. This may have had something to do with the ridiculousness that the premise has up front – “a killer bulldozer” – which has resulted in the film being unjustly ridiculed on a show like Mystery Science Theater 3000 (1988-99, 2017-8).

Killdozer is not a particularly bad film. The main problem is simply that Jerry London is not Steven Spielberg. It is not that Killdozer lacks suspense either – the bulldozer does gain a certain degree of lethality in its prowling up hillsides, crushing the camp and rumbling ominously over the camera – it is just that London fails to generate it with the relentless degree that Spielberg did.

Killdozer is also much more conceptually limited in comparison to Duel. While the scripts of both films are essentially the same – the entire show consisting of the protagonist(s) being pursued by a big, lumbering hulk of motorised machinery and almost anything outside of that having being trimmed – the actual happening here is far weaker. Rather than one man in a car on an open stretch of road, Killdozer concerns five men trapped on an island – the film has contrived a small island as locale as you cannot help but think that anywhere else the film would take place, they could simply get away from the bulldozer by moving at anything faster than a walking pace.

Jerry London does come up with one or two effective scenes of suspense – there is a good one where Carl Betz idly throws stones at the stilled dozer’s blade, he turns around and the camera looks up in a low angle as firstly the dozer’s lights come on and then the blade starts to lift behind him – but fails to keep you gripped on the edge of your seat. The film also has a score of early electronics from Gil Melle, the musician who had created the score for The Andromeda Strain (1971), as well as a number of other works around this period.