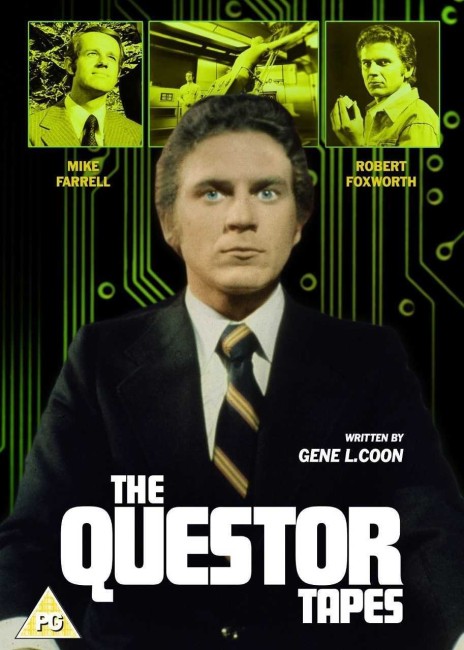 In Pasadena, The Questor Project is trying to bring to life an android designed by the brilliant, late Professor Emil Vaslovik. Vaslovik’s former assistant Jerry Robinson argues that they should follow the original designs but other interested parties have been trying to exploit the android’s advanced designs only to have corrupted its memory. Their attempts to activate the android fail. However, after the laboratory is shut down for the night, the android comes to life. It uses various tools to give itself human-like facial features, whereupon it dresses itself and exits in search of information. Trying to understand the human world, Questor goes to Jerry’s house and forcibly makes him accompany it to London in search of Vaslovik, whom it believes is still alive. The disappearance sparks a manhunt by the laboratory’s head Geoffrey Darro. Questor follows a series of clues in search of its purpose. In the process of so doing, it starts to make many remarkable discoveries about the human world, even of the nature of friendship with Jerry.

Gene Roddenberry gained a legendary fame as the creator and producer of Star Trek (1966-9). Alas, after Star Trek‘s demise, Roddenberry failed to ever repeat the same trick again. He was involved in a series of other tv pilots, including Genesis II (1973) and Planet Earth (1974), two pilot films for a potential series about a group of scientists trying to unite the world in the aftermath of a nuclear holocaust, followed by The Questor Tapes here and the subsequent Spectre (1977) about occult investigators. None of these ever made it to series. In truth, the only successes that Roddenberry had during this period was in resurrecting the familiar – bringing Star Trek back as animated series (1973-4), as a film Star Trek – The Motion Picture (1979) and then as Star Trek: The Next Generation (1987-94).

The Questor Tapes was another of these pilots, originally intended as a series in which Questor acts as a guardian to humanity while searching for its purpose. After the pilot aired and achieved reasonable ratings, the go-ahead was given by NBC for a thirteen episode series. However, Roddenberry was appalled by the changes demanded by the network – such as the elimination of the character of Jerry Robinson and the request for romantic liaisons for Questor – and declined to go ahead with it. Nothing further emerged of the series, although original Star Trek script editor D.C. Fontana wrote a novelisation The Questor Tapes (1974), which closely follows the script for the pilot here. Later of course, Gene Roddenberry based the character of Data in Star Trek: The Next Generation on Questor – indeed, there are a number of references throughout the series to the original, notedly in that Questor was the first to voice Data’s famous “I am fully functional” line in regard to sexuality that was later used in the episode The Naked Now (1987), albeit in a more explicit context.

I was surprised just what a good film that The Questor Tapes is. At the time it was made, the most sophisticated screen artificial intelligences we had seen were HAL 9000 in 2001: A Space Odyssey (1968) and the title super-computer in Colossus: The Forbin Project (1969). The idea of the human-friendly android that was programmed not to harm humanity and protect it had originated in print under Isaac Asimov but had not turned up on screen unless one looks to Robby the Robot in Forbidden Planet (1956). So what Roddenberry does here is doubly revolutionary – in being the first real work to feature the credible development of an artificial machine intelligence and the first serious work to show a humanoid machine in a non-threatening light.

The bringing to life of Questor are some of the finest scenes in the film. We see it awakening on the laboratory table after everyone else has given up and then sitting down to mold a set of ears, lips and then hair for itself, all intercut with scenes where overbearing project head John Vernon grills Mike Farrell for the apparent failure of the plan. This is followed by the excellent scenes where a blank and innocent Robert Foxworth walks out into the world and wanders into the library where it encounters Vaslovik’s secretary (Ellen Weston). Here the film gives us a fine portrait of something that has come to life and is trying to make sense of the everyday human world, even everyday ways of speaking, that are completely alien to it.

I never much cared for Roddenberry’s two Genesis II tv movies but The Questor Tapes is exceptional science-fiction. The writing of Questor’s coldly inhuman dialogue and Robert Foxworth’s playing in a way that is detached and perfectly machine-like yet also manages to become sympathetic and endearing by the end of the show makes for one of the best portraits of machine intelligence we have seen on screen. The plot becomes somewhat more picaresque when the film leaves the laboratory and arrives in London. Even there there are some very well written scenes – Questor’s breaking the craps tables in the casino; the discussion on the meaning of friendship; Questor prompting Jerry to seduce Lady Helena in order to get information about Vaslovik’s whereabouts.

There is the fascinating idea of the information centre and the notion that someone can secretly look in on world leaders and unobtrusively manipulate events, and the surprise climactic revelation of Questor’s origin and purpose. This latter also reveals itself as another facet of Gene Roddenberry’s ardent liberal message – that humanity is in need of the benevolent guidance and that we should be shown the way at the same time as being allowed to make our own decisions and mistakes.

Shows like this are often fascinating to see two or three decades later in terms of being able to spot unknown actors who have gone onto very different careers. This is the case with the two leads Robert Foxworth and Mike Farrell. Both have been associated with wildly dissimilar roles since then – Foxworth principally on tv’s Falcon Crest (1981-90), Farrell as B.J. on tv’s M.A.S.H. (1972-83). It seems difficult before sitting down to watch to imagine how the two actors can slot into radically different characters than their usual screen presences – nevertheless they do and succeed in striking up a likeable pairing that you could guarantee would have worked had The Questor Tapes gone to a series. Among the other names present, it is fascinating to see a now middle-aging Dana Wynter, once the heroine of Invasion of the Body Snatchers (1956), as a high-born British madame.

In more recent years, the rights to The Questor Tapes have reverted to the Roddenberry estate and there have been several attempts made since the early 2000s to revive the idea as a tv series by his son Rod, although nothing has been greenlit as yet.

Director Richard A. Colla worked almost exclusively in television where his other works of genre interest are the tv movie The UFO Incident (1975) about a supposed true-life alien abduction, the theatrically-released pilot for Battlestar Galactica (1978) and the human-alien buddy cop mini-series Something is Out There (1988).