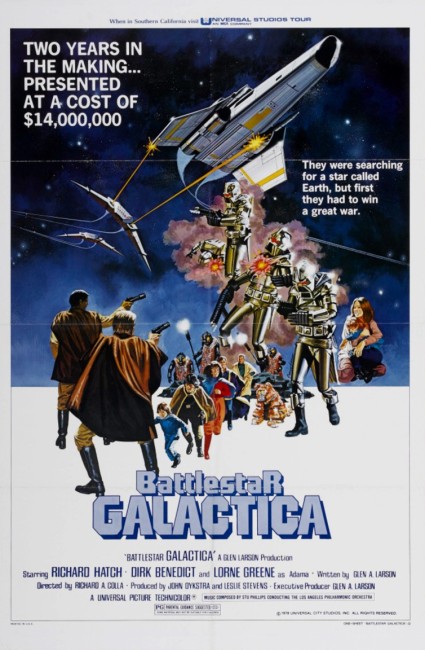 After a thousand years of war between them, the twelve colonies of humans are about to sign a peace treaty with the robot Cylon Empire. Two Viper pilots on advance patrol discover that the treaty is only a trap created by the Cylons so that they can lure the Colonies’ defending battlestars away and then attack the unprotected homeworlds. They rush back to warn the battlestar Galactica. The Galactica’s commander Adama takes decisive action to try to save the colonies. They are too late and the Galactica is the only battlestar to survive the massacre. Adama realizes that their only choice for survival is to round up the survivors of the Colonies in a ragtag fleet comprised of all remaining spaceworthy ships and set forth in search of the mythical thirteenth colony Earth. In their need to obtain supplies, they stop over at the planet Carillon, a world run by the insectoid Ovions, which contains a casino where gamblers always seem to win. As many of the crew are tempted, the Galactica crew discover the paradise contains a more sinister secret.

In 1978, just after Star Wars (1977) had become the biggest thing ever, every filmmaker was rushing to market science-fiction products and it seemed for a short while like an sf fan’s dream come true. There were remakes of Invasion of the Body Snatchers (1978), Buck Rogers (1979), Things to Come (1979) and Flash Gordon (1980), a planned sequel to The Day the Earth Stood Still (1951), a big-screen revival of Star Trek (1979), and adaptations of Ray Bradbury’s The Martian Chronicles (1980). However, little of the promised science-fiction boom transpired with the hope that fandom looked forward to – instead, what it panned out to was a horde of tawdry Star Wars cash-ins consisting of look-alike films with interstellar shootouts between small planes and cute robots. In the case of Lord of Light, it was a $50 million scam jumping in on the science-fiction trend.

Of all the Star Wars imitators, the Battlestar Galactica tv series was the most obvious. Battlestar Galactica hustles the Star Wars copies with a shameless disregard – cute robots, dogfights in space between one-man ships, the cocky pilot, the kid who dreams of being a hero, an evil empire, a giant ominous enemy base emerging to attack at the end, a copycat John Williams score. George Lucas failed to regard imitation as a form of flattery and launched a lawsuit against producer/writer Glen A. Larson and Universal. (Universal promptly counter-sued by saying Lucas had borrowed from their Buck Rogers serial (1939) and the Silent Running (1972) robots).

In a way though, it was high-handed of George Lucas to sue, for Star Wars was only a distillation of his own childhood memories taken from the Flash Gordon and Buck Rogers serials. At least George Lucas played his distillations with a sense of humour and a conscious mythological resonance, whereas Battlestar Galactica‘s copyings are so deadeningly po-faced and one-dimensional it is excruciating. Case in point is when Star Wars threw in R2D2 it was cute but when Galactica creates a robot dog for a lonely boy, the effect is nauseatingly saccharine.

When it is not cobbling from George Lucas, the script for Battlestar Galactica is a random hodgepodge of stolen concepts – the opening narration adds an hilarious swagger of Erich Von Daniken – “There are some who believe humans came from space and were the forefathers of the Egyptians, the Toltecs and the Aztecs, the architects of the pyramids and lost civilizations like Atlantis and Lemuria.” (Not even a disreputable looney like Von Daniken took the belief that Lemuria was a lost continent seriously – it was only proposed as an idea for the possible land migration of animals between continents). Most of the characters are named from the Greek pantheon; the pilot’s helmets are designed as Egyptian headdresses and all the planets have been given the names of astrological signs.

There are also copious allusions to Judaeo-Christian iconography, like the opening scenes, which are supposed to represent the Last Supper, with the twelve councillors, including the traitor, bedecked out in white robes, become laughable. (Bizarrely enough, there are also a number of references from The Book of Mormon littered throughout. Glen A. Larson was a practicing Mormon and there are many images taken from Mormon mythology – the Galactica’s trek seems less like the Biblical Exodus than it does Brigham Young’s trek to found Salt Lake City; and there is clear resonance between the Twelve Colonies here and the repeated (anthropologically absurd) belief in Mormonism of the notion that the twelve tribes of Israel spread to the far corners of the Earth and became diverse modern racial groups).

The politics – humans are good because they believe in freedom, Cylons are evil because they subjugate – are the sort of wincing lectures on democracy that fire up too many bad post-Star Trek (1966-9) science-fiction series – yet in practice are gung-ho cowboy heroics shot through with an arrantly Luddhite racism. (Certainly, the series concept panned out closer to Gene Roddenberry’s original concept of Star Trek as Wagon Train to the Stars than Star Trek ever did). Little thought has gone into the creation of the Cylons as a believable alien race – their sociology trades more in a set of stock ideas – they are machines (vague play on anti-machine themes), they have a leader and subjugate other races (vague play on anti-imperialist message) but mostly are just evil.

The science is abysmal – there is no sense of spatial distances – for the interstellar minefield to have effect, it would have to be light years long; the way it is played it seems only like our intrepid flyboys are clearing a blocking of the Suez Canal. The film is often silly and juvenile – it is like a badly written cartoon that has taken itself too seriously. Most of the acting is bad – former model Maren Jensen is the worst offender – at least Lorne Green of Bonanza (1959-73) fame is present to add some patriarchal dignity to proceedings, although he seems as bewildered by talk of ‘milli-centons’ and ‘felgercarb’ as anyone else.

The effects are the one area where the film looks good. Producer Glen A. Larson brought on board John Dykstra, the visual effects supervisor from Star Wars, and his name is prominently displayed as producer. Dykstra flagrantly copies from his own work on Star Wars but at least the giddy motion control camera-work and the tiny ships zipping around shooting each other up still excites even in imitation.

The Battlestar Galactica tv series lasted for only 21 episodes between 1978 and 1979. Although it rated well, it was pulled from the air because it was then the most expensive tv series ever made per episode and failed to rate sufficiently to justify such expense in the studio’s eyes. The series did not do a terribly good job of following on from the pilot – problems like the food shortages were simply forgotten about unless they could be revived as plot devices. After being killed here, John Colicos was inexplicably revived and made into the leader of the Cylons.

The episodes rarely ever amounted to anything more than routine. Most of the storylines were thin science-fiction rehashes of Westerns and war films like The Guns of Navarone (1961) and The Dirty Dozen (1967), which is surely indicative of people who know little about science-fiction – that it is regarded as a medium where other genres can be transplanted with no more than fighter planes substituted for horses and alien worlds for the Western frontier. The series idea of high concept seemed to be having the Galactica crew encountering an alien who claimed to be Satan..

Reviewed here is the pilot for the series. Prior to its airing on network tv, this was shown in 121 minute cinematic form in Canada. It did so well there that producer Glen A. Larson decided to screen it cinematically in the US as well. In something that must count as one of the greatest testaments to public sell in film history, Larson managed to convince the public to not only pay to see something they had already seen on tv but 23 minutes shorter and with the only additions being a Sensurround soundtrack and the death of the Count Baltar character, which had been judged too violent for tv. (In the tv version of the pilot, Baltar is spared and then given a basestar of his own to track down the fleet).

The theatrical release made money too. The film looks far better on the big-screen than it does on the tube with many of the effects shots, particularly those cruising the length of the beautifully detailed Galactica model, having been designed for the cinema screen. The flip side is that this only magnifies the cardboard heroics and shabby plot.

Director Richard A. Colla worked almost exclusively in television where his other works of genre interest are the Gene Roddenberry tv pilot The Questor Tapes (1974) about the awakening of an artificially intelligent android, tv movie The UFO Incident (1975) about a supposed true-life alien abduction and human-alien buddy cop mini-series Something is Out There (1988).