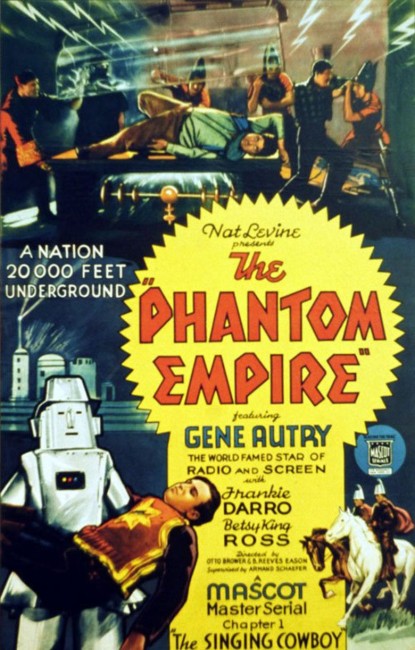 The ‘Singing Cowboy’ Gene Autry broadcasts a regular radio show ‘Radio Ranch’ from his ranch. Professor Beetson arrives at the ranch in search of a source of radium, which he believes comes from the ancient lost city of Murania. Beetson decides they must stop Gene’s broadcast, which will mean that Gene will lose the ranch, so that they can then dig in peace. Meanwhile, in Murania, 25,000 feet beneath the surface, Queen Tika also determines to stop Gene’s broadcast and despatches her Thunder Riders. Joined by his assistant Frankie Baxter and Frankie’s younger sister Betsy, president and secretary of Gene’s fan club, Gene attempts to combat the advanced science of the Muranians. He ventures beneath the surface to join the Muranian revolutionaries in bringing down Queen Tika.

The Phantom Empire is a fascinating artifact from the heyday of the serial. Serials were at their height during the 1930s and 40s, dying out in the 1950s with the rise of television. Serials usually came in twelve or fifteen chapters, one of which would screen each week at matinees before the main feature. (The Phantom Empire was originally released in twelve chapters of about twenty minutes each). They presented thrills – usually Western adventures, spy capers or jungle adventures, sometimes ventures into outer space and superheroes – and would always end on a cliffhanger with the hero in some life-threatening peril where the audiences would have to return the following week to find out how things transpired. Most serials were cheaply produced and of little lasting artistic merit. On the other hand, the era did produce some classics like Flash Gordon (1936) and sequels. (For a more detailed listing see Serials).

The Phantom Empire is considered fondly among many. Its merits would seem to be mostly nostalgic ones or from those who are fans of country-and-western singer/cowboy star Gene Autry. Seen outside of this today, The Phantom Empire is crude and primitive – even as the lowered standards of serials go. It is poorly directed – the two directors seem to have had the idea to merely aim a camera at the action and film what ever happened in front of it with no attempt made to dramatically stage shots. Even for a serial, the plot seems padded by endless numbers where Gene Autry sings (not to mention the terribly contrived plot device of him having to return to the ranch every so often lest he lose his contract. It is nearly half the serial before he ever gets to go down to Murania, for instance). As with some of the cheaper films of the early sound era, there is not even any musical score for the most part.

The Phantom Empire seems to be mostly cast with non-actors. Betsy King Ross, a child stunt rider, comes across as nasal and whiny. As Queen Tika, Dorothy Christie seems out of her depth trying to muster up even the cardboard regality and threat required of serial villains. And of the excruciating lowbrow comedy relief between Lester ‘Smiley’ Burnette and William Moore as they accidentally let off tear gas grenades in their own faces or forget the magic word to make their horse gallop, the less said the better. (Although the slapstick scenes with them clunking about in the tin man suits bring about the only moments of amusement that The Phantom Empire offers).

Serials always had a wonderfully naive charm to them. They created a world of pure exoticism where dauntless heroes could venture forth into the realms of exotic jungles, lost cities, the Far East, Darkest Africa, the Wild West and modern crime venues with about equal interchangeability. The Phantom Empire is perhaps the most famously example of this in attempting to blend Western elements with a journey into a super-scientific kingdom a la Flash Gordon. Portrayals of these exotic realms was always dominated by jingoistic assumptions where the two-fisted white hero was unquestioningly the centre of the action and would lead the natives to set things right – there seems something here that is akin to the assumptions made by imperialism that people in other countries need to be led by the benevolent hand of white men.

The Phantom Empire‘s depiction of a super-scientific kingdom is crude. The model city is passable and the script musters a few wonderful-sounding serial-esque ‘disintegrating atom-smashing rays’, ‘interference rays’ and ‘radium missiles’. The clunky robots with the tin ten-gallon hats are hysterical today and have afforded the film a certain camp value.

B. Reeves Eason (1996-1956) had a career between the 1910s and late 1940s. He made numerous Westerns and in the 1930s began to specialise in serials. These include the genre likes of Darkest Africa (1936), The Undersea Kingdom (1936) and The Phantom (1943). Otto Brower was a director throughout the 1930s and 40s who almost exclusively specialised in Westerns. Eason, Brower and Gene Autry had previously collaborated on the serial Mystery Mountain (1934). which is a Western but has no fantastic elements.