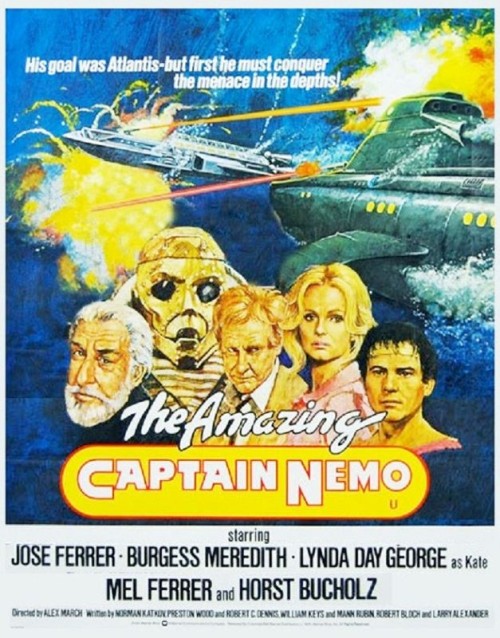 aka The Return of Captain Nemo

Two Navy officers on a diving exercise discover The Nautilus buried under a reef. Inside, they find Captain Nemo in cryogenic suspension. Revived, Nemo wants to set off again on his quest for Atlantis. They persuade him to bring the Nautilus’s highly advanced gadgetry to the aid of the secret government agency they work for. They go into action as the mad Professor Waldo Cunningham threatens to blow up Washington D.C. from his secret submarine base unless he is paid a billion dollars.

In the 1960s, Irwin Allen produced a number of classic genre tv series – Voyage to the Bottom of the Sea (1964-7), Lost in Space (1965-8), The Time Tunnel (1967-8) and Land of the Giants (1968-70) – which have attained a fame less for their stolid pedestrian dramatics than for their bad science and, in Lost in Space‘s case, unintentional camp appeal. In the 1970s, Irwin Allen graduated to the director of’big budget disaster movies with the likes of The Poseidon Adventure (1972), The Towering Inferno (1974), The Swarm (1978) and The Day the World Ended/When Time Ran Out (1980). Throughout the 1970s, Irwin Allen would make infrequent attempts to return to tv, such as the tv pilots City Beneath the Sea/One Hour to Doomsday (1971) and The Time Travelers (1976), but failed to create anything that caught on again as a series. The Amazing Captain Nemo was once such attempt. It was originally a three-hour, three-part mini-series for US tv entitled The Return of Captain Nemo (1978). However, The Return of Captain Nemo failed to sell as a continuing series, whereupon it was retitled and served up to international audiences in theatres.

Compared to Lost in Space et al, it seems that not much has changed for Irwin Allen since the 1960s, bar the advent of Star Wars (1977) – The Amazing Captain Nemo is almost Voyage to the Bottom of the Sea updated as Star Wars underwater. There are priceless gems of bad dialogue – “Let’s hide behind that kelp,” or “I am tired of the black shadow you are spreading over the free world.”

The familiar Irwin Allen-esque flagrant disregard for science and logic abounds (even with the usually dependable name of Psycho (1960) author Robert Bloch among the seven people on the script) – magnets that suck up radiation; subs with afterburners; rayguns with underwater sound effects; underwater conversations; a deep-sea trench that one minute is crushing the sub under pressure but where the next minute the crew can go outside to affect repairs. To talk about the ever-so-faint ludicrousness of a 19th Century scientist coming up with advanced computers, cryogenics, rayguns and submarine-cloning devices – yes, the cloning of submarines – would only be adding fuel to a raging fire.

Despite this, The Amazing Captain Nemo is entertaining in Irwin Allen’s cheap and schlocky way. The heroes are dumbly forgettable, but the action moves okay and Burgess Meredith, often the saving grace of a large number of inane films, plays admirably as the villain of the show.

Irwin Allen’s other works of genre interest are:– as producer/director/writer of The Story of Mankind (1957) wherein various historical figures up in Heaven debate about whether to destroy humanity, which becomes an opportunity for Allen to rehash stock footage from various historical spectacles; as producer/director/writer of the remake of The Lost World (1960); as director/producer/writer of the Voyage to the Bottom of the Sea film (1961); as producer of the tv series Voyage to the Bottom of the Sea (1964-8), Lost in Space (1965-8), The Time Tunnel (1967) and Land of the Giants (1968-70); as director/producer of City Beneath the Sea/One Hour to Doomsday (1971), a failed tv pilot, which Allen then released cinematically; as producer of The Time Travelers (1976), another unsold tv pilot, written by Rod Serling; as producer/director of the notoriously bad big-budget disaster film The Swarm (1978) about killer bees; and as producer of an all-star tv mini-series adaptation of Alice in Wonderland (1985).